Hughie Fury: I Felt A lot Stronger, I'm Ready Now To Fight Anyone

World heavyweight title challenger Hughie Fury halted the previously undefeated Chris Norrad inside two rounds at the Victoria Warehouse, Manchester, last night to put himself back on track towards a world title shot.

The Manchester star looked in sensational shape in his first fight back since his loss to Kubrat Pulev last October and knew that he had to put on a solid performance for the fans and viewers on Channel 5.

Fury took command from the start and was the aggressor as he landed with sharp jabs and unloaded with hard power punches to Norrad’s head and body, midway in the first round he landed with a hard right to the back of Noarrad’s head that hurt the Canadian. 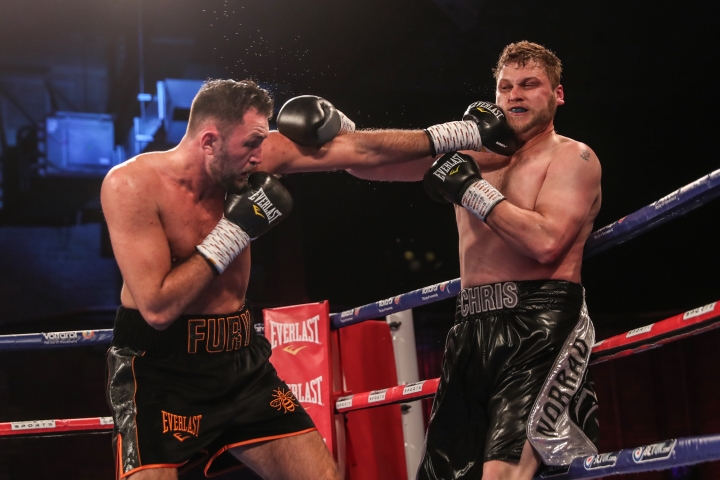 In the second, Fury was on the front foot again and asserted his power and halfway through the round two big right hands dropped Norrad, up at the referees count of nine he was still hurt and it was waved off at 1:51.

Afterwards, Fury thanked his team of father and trainer Peter and renown strength and conditioner Kerry Kayes for transforming his diet and training, he said “I felt a lot strong and a lot fitter and I’m ready now to fight anyone. All the experience I’ve had including the losses is all experience, I’m young and making me the final article for the future.”

On the undercard, female sensation Savannah “The Silent Assassin” Marshall demolished Borislava Goranova - who had not been stopped in nearly seven years - in the first round with a hard left hook to the body that flattened the Bulgarian.  The WBA Intercontinental Super-Middleweight Champion from Hartlepool continues to close in on a mega-showdown against undisputed World Champion Claressa Shields.

Hughie is one of the more comical scenes of boxing,we have the same old same old i'll fight anyone and then his father pulls him back ...gets the easy fights and finagles title shots ,then repeat. All in the while…

"It's time to fight back, that's what Hughie said!" 2Pac - Changes

[QUOTE=hugh grant;19775315]Yes joyce is being ducked by wilder, wilder opting for ortiz again for some reason[/QUOTE] Ducked by Wilder? Joyce is the guy that called out then ducked Ortiz. A few months ago. Not ready for Ortiz but ducking Wilder.…

[QUOTE=Squ□redCircle34;19775245]Needs to get that Mexican beef connect[/QUOTE] Correction: it was 'uncastrated wild boar'. Haha