Hughie Fury’s bid to fight for a world title suffered a setback this evening with a points loss against Kubrat Pulev at Armeec Arena in Sofia, Bulgaria.

The brave 24-year-old was undeterred in his quest for a world title shot in making the decision to fight in Pulev’s home town, facing a hostile partisan crowd on the walk to the ring.

Fury started brightly as he looked to get his jab going from the off, but was caught by the Bulgarian in a scrappy second round exposing a cut above his left eye that he was carrying into the fight. 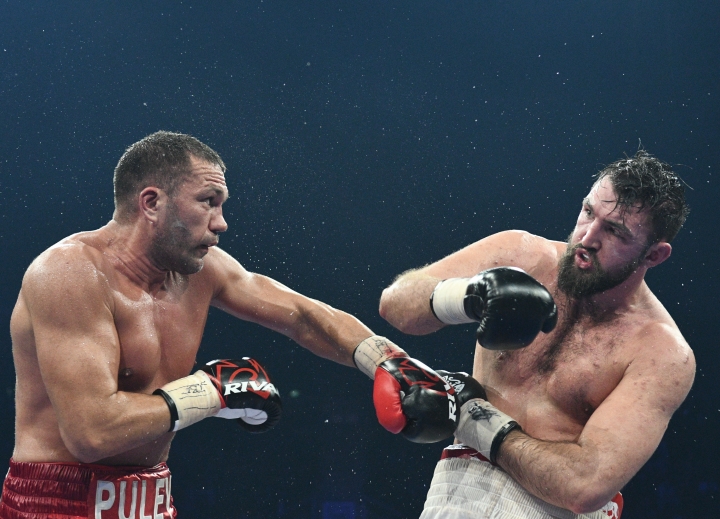 Unfortunately it was not to be for Fury on this occasion, but trainer and father Peter Fury was very proud of his man, strongly in the belief that we would have seen a different champion tonight in different circumstances.

Speaking after the fight, Hughie said: “It wasn’t my night – the cut I suffered a few weeks ago opened up and it affected my performance. Despite that, I gave it my all, went the full twelve rounds and ran him close.

“It was a big ask for my fans to travel all this way and I want to thank them for coming out in force to show their support.”

Trainer and father, Peter Fury added: “Hughie came into the fight with a cut above the eye. He was stitched up two weeks ago but they [the doctors] said it would heal in time for the fight and obviously it didn’t.”

“Pulev caught him with a jab and split it right open. From that moment in the second round it was an uphill battle. I’m proud of my son – he was fighting on away soil, injured, yet he still went the full distance.'

“If the cut hadn’t happened we would have seen a different outcome.”

On the undercard, Hartlepool’s Savannah Marshall put on a dominant display to claim a unanimous decision victory over Argentina’s Yanina Orozco, and with it the Women’s WBA super-middleweight Intercontinental Championship strap.

Both women started the first round brightly, with Orozco catching Marshall in the opening exchanges. Marshall soon found her rhythm and the bout looked set for an early finish as Marshall felled her opponent in the opening stages of the second, only for Orozco to rise from the canvas before the count.

Marshall weathered something of an Orozco fightback in the sixth, but the Argentinian couldn’t muster the quality to seriously trouble her superior opponent.

In the final two rounds Marshall looked to finish off her opponent with some slick combinations and, in particular, a powerful uppercut that rocked her opponent in the tenth, but somehow Orozco stayed on her feet and saw out the round.

Having had her hand raised after the final bell, Savannah Marshall said: “I hadn’t seen much of her, just a short, little 30 second clip online, and she didn’t fight anything like that tonight. She was strong and I think she caught me with a couple of shots in the first round.

“I caught her in the second round and she went down, but she got back up and then after that she was just on the back foot, so then it was just me going for her. But, you know, I did the full 10 rounds, I feel like I could have done 12. I’m happy with it and I’ve got a belt.

“She was strong and she was present and I threw everything I had at her.

“It’s all the hard work paid off. I couldn’t be happier.”

[QUOTE=Robbie Barrett;19228877]Maybe when Ortiz actually starts fighting these guys and beats them like you say. Doubt Ortiz ever will though, he gets hyped doing nothing.[/QUOTE] I doubt any of these guys will give Ortiz the chance.

Good riddance, this guy tried to fight purely on amateurish style of boxing! Points win just by touching his gloves with his opponents body and move around then rinse and repeat! He needs a new trainer cuz he looked flabby…

[QUOTE=alexjust;19231852]Agree with Price. The rest are a bit of a stretch, maybe except for Chisora, who is a B- purely because he gave Whyte quite a fight. Who are you comparing them to? Mike Tyson and Ali? I think it…

[QUOTE=Jkp;19229825]Plenty of other c grade fighters in the UK for him to fight . .. price, whyte, chisora, bellew, Dubois, joyce etc...[/QUOTE] Agree with Price. The rest are a bit of a stretch, maybe except for Chisora, who is a…

Fury: before the fight talking smack, after the fight making excuses. This hype job need to go back to domestic level opponents.