Heather Hardy will have to pay a heavy price for the biggest fight of her boxing career.

"The Commission has issued Ms. Hardy a $10,000 fine and 6-month suspension, as well as a medical suspension," Mercedes Padilla, spokesperson for NYSAC confirmed to BoxingScene.com.

The test was conducted on Sept. 12, one day prior to their DAZN-streamed title fight which marked the first such contest between female combatants to have been subject to random drug test through the WBC-created program. Because of the amount of time required to properly test submitted samples, results were not known at the time of the fight, and were only revealed nearly three full weeks later on Oct. 3. The substance in question, furosemide is a water pill used to prevent the body from absorbing too much salt. It is classified as a diuretic and on the banned substance list, as it has also been used by past offending athletes as means to cut weight or as a masking agent. 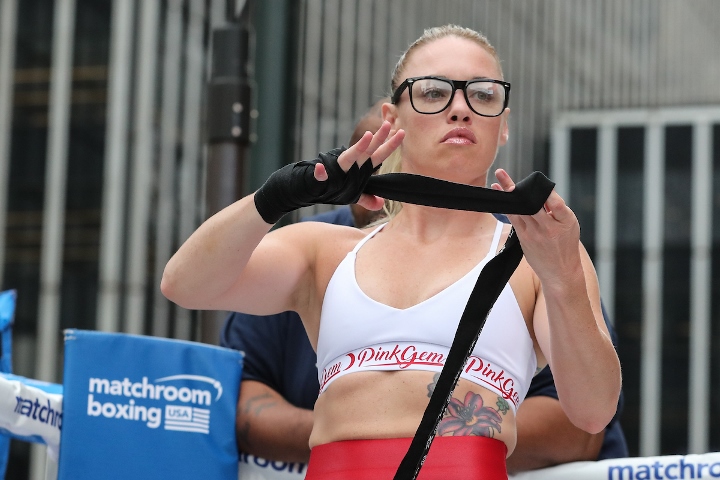 Brooklyn’s Hardy (22-1, 4KOs) has attributed the adverse finding to “a prescription [medication] for period symptoms” and that she had personally alerted testing officials as such beforehand. The 37-year old dual sport athlete—who also competes as a mixed martial artist—was forthcoming in revealing the test results herself, vowing to clear her name.

As is the case with all drug testing results, however, athletes are responsible for whatever product enters their body. Therefore, a positive test result creates the scenario of guilty until proven innocent.

Even in the event that the prescription medication is disclosed in writing, athletes are still required to file for a Therapeutic Use Exemption (TUE) in order for the substance in question to be cleared by the contracted testing agency or the presiding commission. To date, no such paper trail exists to validate such steps were taken.

Hardy and Serrano (37-1-1, 27KOs)—a Puerto Rican southpaw who was raised and still resides in the Bushwick section of Brooklyn—were among the first wave of female athletes to willingly enroll in CBP, which prior to this spring had been limited to male participants.

Serrano tested clean and will use VADA for all fights moving forward. Included among that lot is a long-discussed and potential super fight with Ireland’s Katie Taylor, a two-time Olympian, 2012 Olympic Gold medalist and reigning World lightweight champion who moves up in weight to challenge 140-pound titlist Christina Linardatou this weekend in Manchester, England.

As first reported by BoxingScene.com, Taylor’s clash with Linardatou is the first female fight in history to undergo full random drug testing directly with VADA. Taylor has previously insisted that all of her fights moving forward—beginning with this bout—will have to come with such testing standards.

Meanwhile, Hardy’s next fight in the ring will have to come with proper clearance from the NY commission. Along with the current suspension and fine, she will be required to provide a clean testing sample upon reapplying for a boxing license.

Hardy also has the right to appeal the decision, if she and her team so choose.

"Ms. Hardy has 30 days from Notice of the Suspension to request an administrative hearing on the matter, should she choose to challenge the Commission’s action," confirmed Padilla.

[QUOTE=ShoulderRoll;20150218]:lol1: The NYSAC doesn't mess around. UKAD on the other hand...[/QUOTE] That’s not even important. As I always say about the knowledge of boxing fans... do they know what “post” means? Meaning after. To make it worse, this article states…

[QUOTE=MED_1978;20152828]This is not fair that Hardy has to pay $10k when the women's boxing purses are not great. I think 1K would've been fairer. I hope she appeals this decision, especially as she told the commission prior to the fight,…

This really just re-iterates the ridiculousness of the BBBoC's process...seriously is it a 1 person'd operation?? As for the fine...10k seems incredibley high considering the average purse of her career. Don't get me wrong, cheating is disgusting! However potentially bankrupting…

This is not fair that Hardy has to pay $10k when the women's boxing purses are not great. I think 1K would've been fairer. I hope she appeals this decision, especially as she told the commission prior to the fight,…