Heather Hardy’s greatest attribute is her honesty. Whether in the ring or outside it, there is no question about where she stands; that’s led her to a world championship and a 22-0, 1 NC record when she has the gloves on. When she’s outside the ropes, it means that a question is responded to with a straight answer.

So about the power of her opponent on September 13, Amanda Serrano…

“Of all the people in my life that I’ve gotten into fights with – sparring, MMA, kickboxing, fights on the street – I never got punched as hard as Amanda hit me,” said Hardy who sparred with the seven-division world champion early in her career.

Despite this, Hardy is more than ready to take the fight to her fellow Brooklynite in Madison Square Garden’s Theater next week. And she’s not concerned with the power that has ended 27 of Serrano’s 36 wins.

“Hell no,” said Hardy. “I ain’t scared of nobody with two hands. You know I’m always here to talk about my mama, and my mama always told me, ‘Nobody will beat you like me,’ and she was not lying. (Laughs) She never told me one lie. Nobody will hit you like your mama.”

“The Heat” may be joking, but then again, she’s is dead serious when it comes to Serrano’s power and her willingness to take it. That willingness to walk through the fire hasn’t always been there for Serrano’s foes once they take a shot or two.

“If anyone’s gonna stand in there with Amanda, it’s gonna be somebody that’s not afraid,” said Hardy. “It’s a boxing match, a 10-round match, you’re gonna get touched. I think a lot of these girls that she’s stopped so early feel that power and they’re like what the hell was that. It’s shocking to get hit that solid. I’ve been hit by it and I remember, ‘Man, this girl hits like a dude.’ So I’m ready for that.”

Hardy remembers those days in the gym when she was brought in by Serrano’s manager / trainer Jordan Maldonado for some work. They weren’t easy sessions for the Gerritsen Beach native, but nothing has ever come easy for Hardy.

“I think Jordan was more impressed that I could take an ass whupping like I did way back when and still come back for more,” she said. “It’s hard for her to find durable bodies who were willing to come and get punched by her. And I was willing to come back and come back, so I think Jordan respected me for that, and then we kind of went our separate ways as far as building our names and our careers.” 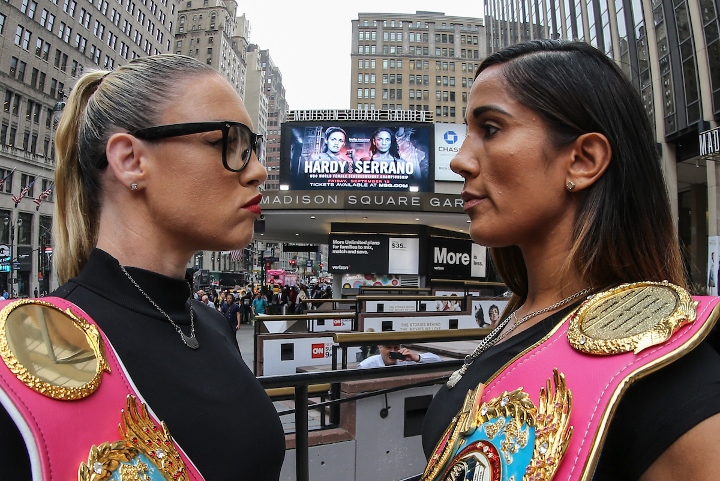 The two remained friendly, Serrano even going as far as to tell me a few years ago that she would rather fight her sister Cindy than Hardy, so it surprised many in the New York City area when this bout was announced, including the champion.

“I honestly couldn’t tell you what happened,” said Hardy. “You’d have to ask her. Jordan always said from the beginning that we’re not gonna use each other to bring ourselves to the top and if we each ever get to a spot where we can make some money off fighting each other, then we’ll talk. I don’t listen to what people say; I just work, and then one day I got a call that said Amanda Serrano was challenging me for my belt and the WBO was ordering that I either vacate or take the fight. So here we are. But it actually did take me off guard. She has titles in seven different weight divisions, so it was kind of like, ‘Hmm, I wonder why you want to come for this one?’ But it’s not my place to wonder, I’m just here to fight.”

And fight Hardy does. Whether it’s under boxing rules, in mixed martial arts or in life, the 37-year-old never leaves anything for the swim home. That approach has had its ups and downs, but there’s no doubting that when it’s time to put the mouthpiece in, she’s going to be in the fray for as long as she’s able. That makes next week’s bout an intriguing one, because while Serrano has cemented her place on the pound-for-pound list as one of the elite in the game over the years, what happens in the late rounds if she hits Hardy with her best shots and “The Heat” is still marching forward? Hardy doesn’t think her challenger will fold.

“A lot of people seem to think that Amanda isn’t battle tested, and she really is,” said Hardy. “She knows how to walk through the fire, just like I do. And if anyone stands a chance in there with a vicious puncher like Amanda, it’s somebody like me. I’ve got the hardest head in the business.”

Many fans and pundits aren’t giving Hardy a chance, making her a sizeable underdog for the first time in her career. That’s no news to the woman making the walk that night, and again, she’s paying no mind to it, though it’s easy to tell that it stings a little.

“After you get to a certain point, it’s like if I don’t win, I kinda lose who I am,” said Hardy, whose last trip to the ring was her title-winning effort in a rematch with Shelly Vincent last October. “This fight is important to me because I am a big underdog and everyone’s already written me off. People are already talking about her fighting Katie (Taylor). One writer wrote, ‘This is gonna be the hardest win of her career.’ (Laughs) Okay. People like me, they love me, they want me to win, but nobody thinks I could really do it, except for the people who see me every day, like my team, my coaches, my sparring partners.”

That’s really all she needs, though in truth, all she needs is her own will and her own two fists. No one will be in the ring with her on September 13 except Serrano and a referee, and in a fistfight, Hardy will always feel good about her chances, even if she’s being looked at by some as the B-side as Serrano moves towards a SuperFight with undisputed lightweight champion Katie Taylor. But a fight with the Irish star is on the table for Hardy as well if she wins, and with so much at stake, how could anyone count her out?

“Everyone’s hyping up Amanda, the promoters are hyping up Amanda,” said Hardy. “I was almost called her tune-up, her warm-up, her step getting ready for Katie. It’s like I’m fighting everybody to win this one, but I don’t mind. In boxing, I’ve never been the underdog. In my real life, I’ve been fighting my way up from the bottom since I was a little one. That speaks real highly of your character because your character comes from how you fight when you’re at the bottom. I know what it’s like to fight from the bottom to the top. When people say that I couldn’t do it or I wouldn’t do it, or nobody could do it, I did things nobody would have ever dreamed I would. Imagine in 2012, when I turned pro and I won my first fight. Imagine me getting on the microphone and saying, ‘Guys, in five years, I’m gonna win my first world title on HBO.’ How many people would have laughed at me?”

Maybe a few, but they’re not laughing now. Heather Hardy delivers on her promises, and there are still some left to take care of.

Hardy looked like an amateur boxer in MMA ... never seen her in a boxing match and have no interest in it

Amanda Serrano vs Amanda Nunes. One in the ring and one in the cage!

Serrano should Win by KO or UD.

I like Heather, but unless all that weight hopping has hurt Amanda, she's got her work cut out for her.

Pride comes before a fall , hardy is tough but cannot punch , and with being brave this combo means she cannot force Serrano back or keep her off so will have to take the shot .. she gets bashed…