Promoter Eddie Hearn admits that it's looking less likely that his two scheduled pay-per-view events will proceed as planned in the month of May.

On May 2 in Manchester, Dillian Whyte is scheduled to collide with former world champion Alexander Povetkin.

And on May 23rd, Oleksandr Usyk will take part in his second heavyweight contest, against Dereck Chisora at the O2 Arena in London. 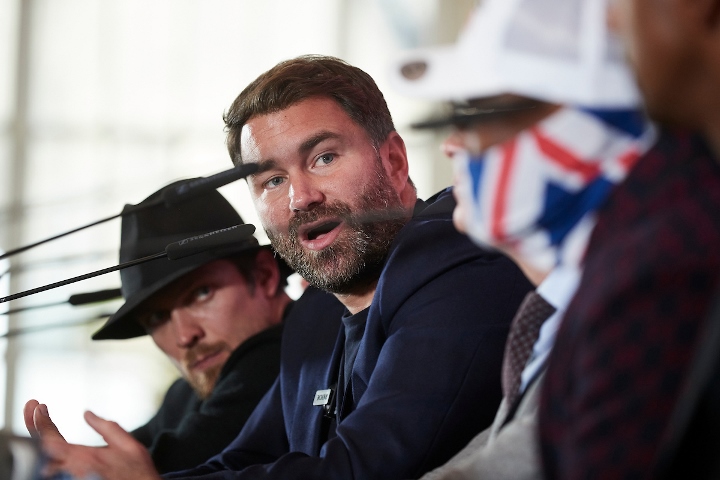 Hearn has already canceled all of his scheduled events for March and April.

And now May appears to be in jeopardy of being pushed back, with Usyk-Chisora and Whyte-Povetkin being postponed.

“I think so. We’ll make an official announcement this week regarding those two shows. But right now the chances of boxing in early May are very limited and even in May at all – and maybe in June," Hearn told IFL TV.

“It’s not just about a period being over, a quarantine being over and we just go: ‘Okay, Saturday night – who is coming?’. It’s going to take time for people to gain confidence, trust and want to go out again.”

As previously reported, Hearn already has backup plans for those two events in place.

"We have contingencies in place to move Dillian Whyte to the middle of June, to move Derek Chisora-Usyk back into the end of June, early July, and of course Anthony Joshua, who was due to go June 20, at Tottenham Hotspur football club," Hearn said to Sky Sports.

"Really relies on the run of the Premier League now, because if the Premier League extend their season, Spurs will need their stadium. We already have a reserve date that we're discussing with Spurs of July 25 for Anthony Joshua against Kubrat Pulev at Tottenham Hotspur Stadium."

I want to see those fight badly. At this pace, all boxers are going to fight tuneups. :nonono:

AJ VS PULEV IS ALSO PUSHED BACH PULEV WAS RIGHT! HEARN THE SCAMMER TRYING TO WAIT TILL THE LAST SECOND LIKE A PARASITE.... :hijacked:

Yeah but I don't think Whyte wants to fight Usyk.

These 2 fights are pointless. No one outside of British boxing cares about these 2 fights. Why waste time, chance of upset and injury? The 2 that should be fighting is whyte vs usyk.