Hearn: We Can't Put Haney In Against An Unknown, In A One-Sided Beatdown

Haney’s promoter says he wants to make competitive fights for DAZN once the COVID-19 pandemic allows them to start putting together a schedule for the second half of 2020. Hearn told DAZN’s Chris Mannix for the most recent episode of the Sports Illustrated podcast that practical approach will include matching Haney, who has not fought since he underwent surgery on his right shoulder in December.

“He has to. He has to,” Hearn said in reference to Haney facing a legitimate opponent next. “There’s no value – and I’ve had the conversation with Devin and Bill [Haney, Devin’s father and trainer]. And he’s a good example of someone that actually wants to be in proper fights. The difference is with Devin, and the slight disadvantage he has, is he is coming off shoulder surgery. You know, so notoriously, you would give that guy a slightly easier fight.

“We’re not gonna do ourselves any favors if we put on Devin Haney against someone you’ve never heard of, in a one-sided beatdown. I feel like we’re losing the opportunity to expose ourselves in a short window, with a poor product. So, there’s no reason why Devin shouldn’t fight Luke Campbell, he shouldn’t fight Javier Fortuna, he shouldn’t fight Jorge Linares in his first fight back. You know?” 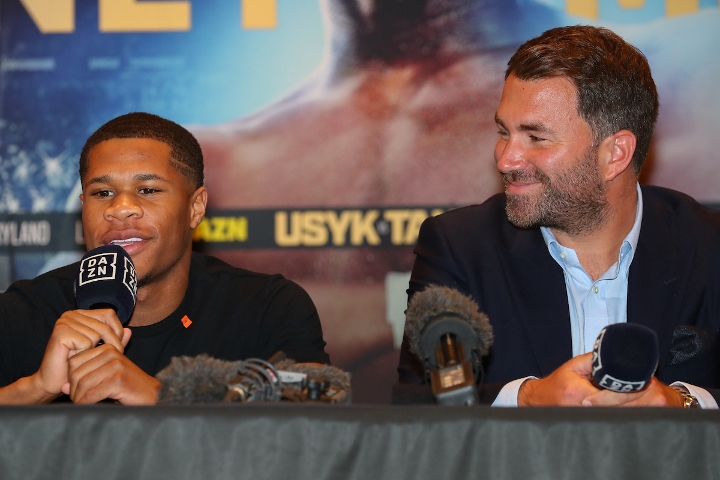 The 21-year-old Haney had surgery the following month, which led the WBC to relegating him to its lightweight champion in recess. The WBC since has reinstated Haney as its 135-pound world champion and ordered him to fight the winner between Javier Fortuna, its number one contender, and second-ranked Luke Campbell.

The Dominican Republic’s Fortuna (35-2-1, 24 KOs, 1 NC) and England’s Campbell (20-3, 16 KOs) were supposed to fight April 17 at MGM National Harbor in Oxon Hill, Maryland, but that fight was postponed due to the coronavirus crisis. Mauricio Sulaiman, the WBC president, told BoxingScene.com recently that the Fortuna-Campbell bout will be rescheduled.

Haney must fight the winner, who will be his mandatory challenger, but he will be allowed to make a title defense against an optional opponent before facing Fortuna or Campbell.

Yvan Mendy is your guy, tough rugged vet, Campbell fought him being too green as a pro and lost, can Haney pass this test

can't no white boy beat him

All Hearn has given Haney are unknowns in one sided beatdowns.

[QUOTE=RJJ-94-02=GOAT;20572781]Hearn: “we can’t put Haney in with an unknown”. In Haney’s last fight Hearn matches him against the infamous and much renowned Alfredo Santiago. The public school nonce is something else man...:lol1:[/QUOTE] He obviously meant they can't do it anymore.

He wants to put Haney in with a known no hoper. Like a name on a sacrificial lamb makes a difference. Orlando Cruz Comes to mind.