Promoter Eddie Hearn is very open to the idea of staging big fights behind closed doors.

Due to the ongoing coronavirus pandemic, Hearn was forced to postpone numerous events - including Anthony Joshua vs. Kubrat Pulev, Alexander Povetkin vs. Dillian Whyte, and Derek Chisora vs. Oleksandr Usyk. 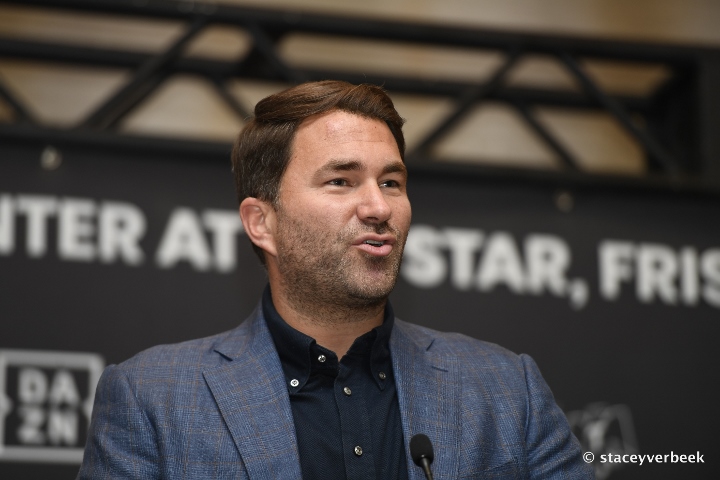 Joshua-Pulev was scheduled for June 20, and pushed back to July 25 - but that date could very well fall out as well. Hearn prefers to have a crowd for that contest, in the UK, but realizes that he may be forced to take the show on the road.

"Those visual impacts are so important for Joshua’s brand, for the sport of boxing, for our country – I don’t want to do that behind closed doors. I want to give ourselves every opportunity to stage an AJ fight in front of a crowd. We may have to bite the bullet and say he’s only going to box once this year. ‘If that’s the case, we’re okay to go in September or October. Don’t want to go much longer than that. Then it’s a year since he last boxed," Hearn told IFL TV.

On the other hand, fights like Whyte vs. Povetkin and Chisora vs. Usyk have more of a chance to take place behind closed doors.

Hair plugs better do something since deadzone USA is SINKING

HAIRPLUGZ HEARN HAS NO CHOICE :chairshot

You don't need doors Edward. Get creative!!! Put a boxing ring in the middle of a jungle, on the deck of an aircraft carrier, in a derelict warehouse, an empty mall, an amusement park, observation deck of a skyscraper... Think…