Hearn: Usyk, Parker Are Frontrunners For Chisora's Next Fight

According to promoter Eddie Hearn, heavyweight contender Derek Chisora could have a major fight in his next ring return - with former world champions Oleksandr Usyk and Joseph Parker as the frontrunners.

Chisora was scheduled to face Parker last month, but the former champion withdrew with an illness. Parker was replaced by Olympic bronze medal winner David Price, who was stopped in four rounds.

There is some talk that Chisora could even fight for the vacant WBO title. 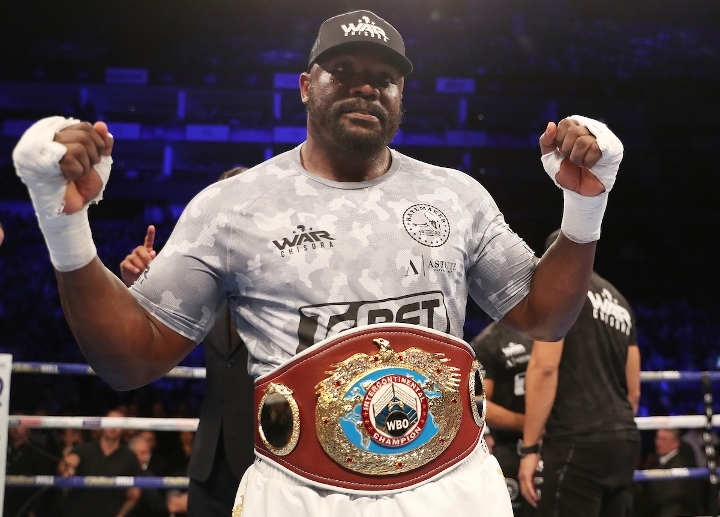 Andy Ruiz is staking the WBO, IBF, IBO and WBA belts against Anthony Joshua on December 7 in Saudi Arabia.

The winner of that fight will be obligated to face Usyk, who is currently the WBO's mandatory challenger.

Hearn could see the scenario of either Joshua or Ruiz vacating the WBO belt - which in turn would create the possibility of an Usyk vs. Chisora clash for the vacant title.

Although Chisora wants to return on the Ruiz-Joshua undercard, his next fight is likely going to take place in early 2020 - with a date in February being the current target.

"The Joseph Parker fight is ready to go," said Hearn. "Del Boy is the 'Benjamin Button' of British heavyweight boxing. Big fights out there for him and opportunities, and he'll be training hard.

"I owe David Haye a call. I think they are even trying to jump on the Saudi card as well. But early next year I think you'll see the return of Derek Chisora - and Usyk and Parker are the frontrunners."

I want Usyk against Chisora. It would be competitive with 2 big names and Chisora is like the gatekeeper to the top-10 so will be a good measure of how Usyk perfroms at heavyweight

usyk aint fighting until he gets his wbo shot so stop talking **** hearn. also parker has been told he cant get on the dec 7th card so how can chisora get on it. it will be parker v chisora…

I want Usyk against Chisora. It would be competitive with 2 big names and Chisora is like the gatekeeper to the top-10 so will be a good measure of Usyk

Parker is better fight for Chisora I guess. It is hard tom believe Chisora has a chance against Usyk.

Chisora is a credible name and easy UK money. They will line up to fight him.