Hearn: Don't Be Surprised if Joshua is on DAZN in the US in June

Enough has changed between now and then for Joshua’s team to accept the reality of moving away from that date in efforts to secure his next ring adventure.

Joshua (22-0, 21KOs)—the unbeaten, unified heavyweight titlist and a leading box-office attraction—remains no closer to firming up plans for his next title defense than was the case immediately following his knockout win over Alexander Povetkin last September in London. 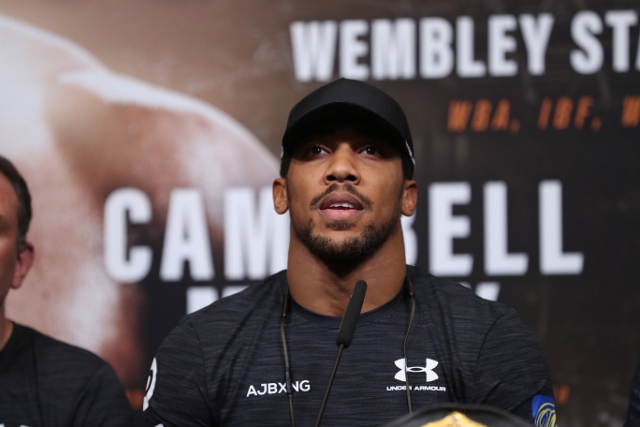 It’s not from a lack of trying, as promoter Eddie Hearn has made offers to all of the leading heavyweight candidates. Wilder has remained focused on finalizing terms for a rematch with Tyson Fury, with whom he fought to a 12-round draw in their title thriller last December in Los Angeles, the event and its commercial success greatly changing the dynamic that a showdown with Joshua is the only heavyweight fight that matters.

Joshua handed Whyte (25-1, 18KOs) his lone career defeat, scoring a 7th round stoppage in their Dec. ’15 clash when both were unbeaten rising contenders. It was Joshua’s last fight before his first title win, crushing Charles Martin in two rounds the following April to begin a heavyweight title reign now coming up on three years.

Whyte has won nine straight since then, including two over longtime rival Dereck Chisora and a 12-round nod over former heavyweight titlist Joseph Parker. The stretch has enabled the 30-year old from England by way of Jamaica to position himself as a leading contender for two alphabet titles—one held by Wilder and the other by Joshua.

For months, it was believed that Whyte was the frontrunner to land the lucrative assignment in the absence of a superfight with Wilder or Fury. Now it seems that neither Whyte or even an April 13 return is next for Joshua.

“Whyte is (unhappy),” Hearn acknowledged of the heavyweight contender, who is now a promotional and network free agent currently in the United States fielding other offers. “He’s got his price tag for the fight. Anthony’s got his price tag, it’s a voluntary shot for Dillian Whyte.”

In accepting that potential scenario playing out, the more likely option for Joshua’s next ring appearance could also serve as his U.S. debut. It could be an easier event for Hearn’s Matchroom Boxing to finalize, as the USA extension shares promotional rights to unbeaten Brooklyn-bred heavyweight Jarrell “Big Baby” Miller (23-0-1, 20KOs) who is now an official entry in the Joshua sweepstakes after months of baiting the unbeaten Brit.

“Part of me wants to see Anthony Joshua in the United States,” Hearn admitted, even teasing a date, location and opponent for that very scenario. “Jarrell “Big Baby” Miller, he’s creeping into the Top 5 right now. To be a credible (worldwide) superstar, at some point you have to fight in America.

“To see Anthony Joshua fill up Madison Square Garden with 21,000-22,000 in attendance – that’s a real statement to be made. We’ll see what happens. I think you’ll get a decision (made) next week. If he can’t get Wilder or Fury or Dillian, I think you have to come to America and Jarrell is at the front of that queue… but don’t be surprised if we see Anthony Joshua on DAZN in the United States in June.”

At this point, it would seem less surprising than Joshua returning on April 13 against an opponent credible enough to warrant a stadium fight.

They only offered whyte 4 million pounds?

I would rather this than seeing him pummel Whyte again

[QUOTE=Kannabis Kid;19454499]Joshua is the a-side only in Europe lol I'm tired of these damn AJ fans talking about this **** its obvious that guy doesn't want to fight they know Wilder is going to rematch Fury in a bigger fight…

[QUOTE=KTFOKING;19451711]Actually Hearn was fine with it being in the US as he said it will make more money here but Joshua insisted the fight take place in the UK. And guess what? He has every right to demand that. Joshua…

[QUOTE=Fabes88;19450893]Lol this comment here is proof that no matter what aj does next there will be someone crying about it.[/QUOTE] This is how deep down, everybody clearly expresses that Anthony Joshua is the number 1 heavyweight in the world 'The…