Hearn Could See Many Boxers Leaving The Sport For Other Jobs

Promoter Eddie Hearn could easily see a scenario where many boxers will be forced to leave the sport - as a direct result of the ongoing coronavirus pandemic.

On Monday, the British Boxing Board of Control extended the suspension of all boxing events until May. The prior order had suspended everything until the end of March.

Hearn had anticipated this possibility and his company had already pushed back all of their events in March and April. 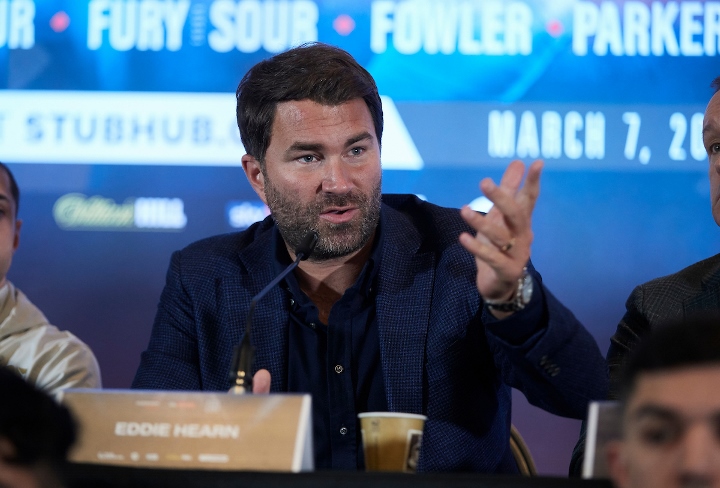 In the United States, most events - including those promoted by Hearn - have been canceled in March and April. Hearn has also canceled events in other countries, like Italy.

The financial impact, as boxers are not able to compete and earn money, could force many of them into other professions.

"The coronavirus is going to have a massive impact on every business, particularly boxing," Hearn told the BBC Radio 5 Live Boxing podcast.

"If this drags on to September, October, November, December we will have fighters that have not boxed this year. The fighters at the top end are going to be fine but the fighters coming through, small hall fighters, ones starting their careers or those who do not have a sponsorship deal face big concerns.

"We do not want people to leave the sport, we want the more fighters the better. But look at the Olympics, these people have grafted for four years to achieve their dream and fight in Tokyo. There's no chance of these Olympics taking place so what are they going to do? Everything is going to be a complete reshuffle of every sport.

"The Premier League moving back four months affects next season, the Euros have been cancelled, what will happen to the Olympic cycle? What will happen with our shows? We're delaying events in place and fighters are delaying their time to peak and earn, everyone is holding their breath to see how long this lasts - the message right now is do as people say. We hope to return to action in late or mid summer but no-one knows."

I agree with Eddie Hearn here. This is going to suck fighters and people in general, their economy. Fighter with love to the sports are going to back, that is definitely and others drop their dreams for the purpose of…

[QUOTE=greeneye99;20477628]Sell dope? This post is sooo Racist[/QUOTE] AJ the convicted drug dealer is the most experienced at selling dope

Majority of top fighters are not very educated, the only jobs available for them are construction, driving big rigs or driving Uber.

Go work on the oil rigs. BIG money out there.