Hearn Says Joshua vs. Whyte Rematch is Getting Closer

ANTHONY JOSHUA is close to sealing a rematch with Dillian Whyte.

AJ is on the hunt for his next opponent, with another date at Wembley Stadium pencilled in for April 13.

WBC champion Deontay Wilder is set to lock horns with Tyson Fury again in a rematch of their controversial Los Angeles draw back in December, so a second bout with Whyte initially seemed the unified heavyweight chief’s most logical option. 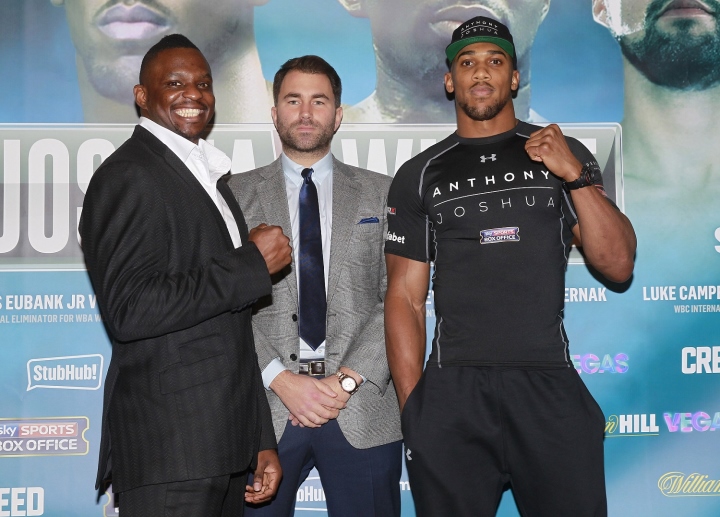 Yet, 'The Body Snatcher' has so far failed to agree on terms with Joshua and his team, meaning unbeaten American Jarrell Miller has moved into contention to take his place.

Hearn, though, says Joshua vs Whyte 2 is ‘close’.

“It is close, Whyte and AJ is close,” he told ThaBoxingVoice.

“There is a chance if we don’t go April 13 with AJ Whyte, we can still do that in May or June in England.

“The Jarrell Miller fight is an option for June. It’s just a case of weighing up if it’s the right time for AJ to come and make his debut in America.

Anthony Joshua is on the hunt for his next opponent

“I do think there’s value in doing that, but you can’t really win in this game because people always say Joshua is a home boy. [When he says] he’ll come to New York and fight this loud mouth in New York, he’s then running from the others.

“I just think at some point he needs to make that US debut and in the landscape at the moment, this would be an interesting time. It all comes down to who actually wants it.”

Miller, 30, has claimed 20 of his 23 professional victories by way of knockout.

The Brooklyn man says he is waiting to find out if he will face Joshua next, but insists he is yet to receive anything in ‘black and white’.

“If AJ fights Dillian Whyte, or maybe I get to knock him out in June. We're waiting on finding out exactly what's going to happen with those two guys first,” he told Sky Sports.

“I’m not the kind of guy that gets gassed up. When I see pen and paper, then that's when I take it more serious.

“All been verbal talk. We start seeing something formally in black and white, then we'll get a little more serious. Right now it's all talk.

“They are finding ways to make it happen. They can, I don't think it was a big problem. I think AJ really wants the easier fight, which is Dillian Whyte, but they're trying to give Dillian Whyte the benefit of the doubt.”

[QUOTE=Sickmerch1990;19484843]Ortiz only victory of any note was 4 years ago vs Jennings who isn't even a top 20 fighter Parker imo would beat wilder 100% got some chin on him Parker and if wilder ain't knocking you out then a…

[QUOTE=Ake-Dawg;19475541]Rankings are subjective and not some authority. As far as Whyte earning his rematch...meh. He beat some C level guys and Parker...barely. Better names than say Ortiz but a lot of people give Ortiz more credit for almost beating Wilder…

[QUOTE=Phenom;19475548]Maybe because he looked like **** against Parker and a shot Chisora? At least Miller and Ortz are not going life and death with 8 loss fighters Whyte would earn the rematch if he was a Mando and at that…

[QUOTE=JWHardin;19479094]What is Ortiz supposed to do if they all of a sudden go into hiding after he publicly accepts their challenge? He waits for a response and offer, and if none, signs for another fight. No, you shouldn't blame Ortiz…

[QUOTE=lolasif;19476585]Yes, Whyte called out Ortiz. Then Ortiz signed to fight Kaufmann. Joyce called Ortiz, then Ortiz proceeded to sign to fight Hammer. In both situations, Ortiz was the first one to sign a fight. I don't entirely blame Ortiz for…