Hearn on U.S. Market: Feels Like We're Getting Great Momentum

With each show in the U.S., the growing pains heal a little easier for Eddie Hearn.

For years the leading promoter in the United Kingdom, Hearn’s Matchroom Boxing USA model took some time to get off the ground but looks to have hit its stride with its recent run along with what lies ahead. A big step forward came in the success of a recent DAZN-streamed show live from Philadelphia, which featured a healthy mix of local and Irish flavor to help kick off St. Patrick’s Day weekend.

“It feels we’re starting to get some great momentum, and not just with May 4th and Canelo (Alvarez)-Daniel Jacobs and the June 1st (Anthony) Joshua-(Jarrell Miller) Madison Square Garden show” Hearn told BoxingScene.com. “The March 9 show with Dmitry Bivol and Joe Smith—on paper—was a step in the right direction but didn’t quite click the way we hoped.

“The show in Philadelphia, the lineup (we had) was one of shows I’ve been the most excited bout. It’s probably our most stacked and competitive cards without the big names. Katie (Taylor) in a lightweight title unification bout, Tevin (Farmer) and Jono Carroll at the top, a great Philly trade fight (Avery Sparrow edging out Hank Lundy) and the middleweight title eliminator of sorts (Maciej Sulecki barely outlasting Philly’s Gabe Rosado).” 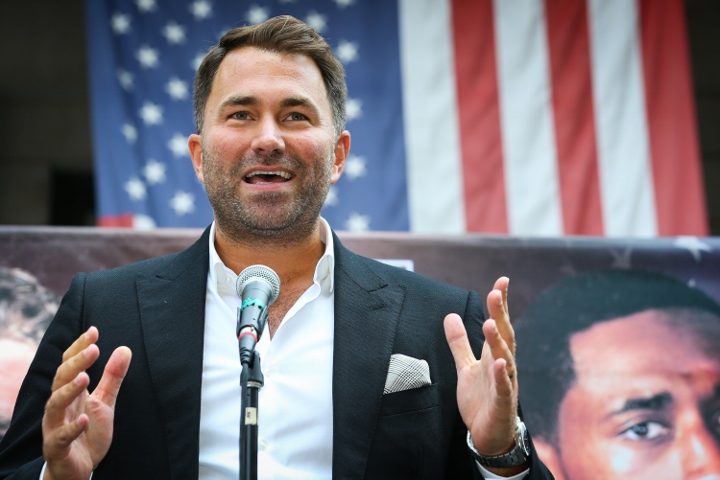 The March 15 event at the Liacouras Center drew rave reviews from those watching the livestream along with the rabid crowd in attendance. Greatly assisting in the effort was the grassroots work put in by Hall of Fame promoter J Russell Peltz and marketing strategist-turned-rising promoter Michelle “Raging Babe” Rosado, with the combined efforts of all involved putting 5,246 in attendance, none of whom left disappointed.

“When you have people turn up to these events, you want them to walk away saying, ‘Wow, that was fantastic,’” notes Hearn, who admits that developing a fan base for his U.S.-based boxers has been a challenge he’s determined to conquer.

“Shows like this, that’s how you build your audience. The crowd you draw here, 5,000 or so, you put on a great performance and then next time Tevin defends his title in Philly, that crowd becomes 6,000-7,000 and then 8,000-9,000 the one after that. You have to remain consistent in the promotion of the event and the fighters’ performance. It’s not difficult at all, this is just what happens.”

The formula has been easler to apply on the other side of the Atlantic, where the British fans have proven a faithful and loyal audience through the years—even at the cost of Hearn himself drawing a chorus of boos from any given UK crowd.

He came to the U.S. already armed with the biggest gate attraction in the world today, as Joshua has sold well over 300,000 tickets over the course of his last four title defenses after selling out smaller venues (read: 12,000-18,000 seat arenas) in a manner of minutes after going on sale to the general public. Hearn’s UK arsenal, however, didn’t seem to mean very much to U.S. audiences—or athletes—right out the gate.

“I admit, I was a bit naïve to think I could just stroll in and sign everyone from day one,” Hearn reflects, although his U.S. roster continues to grow as the DAZN platform continues to invest more heavily into the sport. “So for me and for our team, the challenge was understanding the market place and the mindset of the average customer.

“In the UK, I can tell you every major city and how to sell an event there. You build a fighter, grow him into an attraction. It’s quite simple. Over here, though, it doesn’t quite happen that quickly. So we’ve changed our approach a bit and I think what’s gone unnoticed in our development is the young fighters we’ve recruited. We’re talking about all top-level U.S. amateur stars, 18 and 19 years old we’re adding to the roster.”

Two such boxers both made their respective pro debuts on back-to-back weekends.

Beginning with a stacked April 26 show in Inglewood, Calif.—topped by the rematch between Srisaket Sor Rungvisai and Juan Estrada, along with a 122-pound title unification clash between Daniel Roman and TJ Doheny—comes an avalanche of top-shelf talent all the way through late June.

“The two shows we just had, now leading into April, I really feel like we finally have some great momentum going. The April 26 card has gotten a tremendous response already. The big one on May 4 with Canelo and Jacobs—the first of three big middleweight shows in the next couple of months, with Demetrius Andrade and GGG (Gennady Golovkin) fighting (jn separate bouts, and likely on separate shows) in June.

“AJ-Miller at MSG. (Oleksandr) Usyk (tentatively slated for May 18)… that’s not even the whole DAZN roster (for the spring). It’s not about what can we do on DAZN for the next 3-5 shows; we’re looking to see what we can do in the next 3-5 months, while we keep growing the talent. It’s a great time for boxing and we’re really building some nice momentum.”

[QUOTE=Mammoth;19599578]I'd probably watch the Usyk fight live and watch Wilder knock Breazeale out on DVR. It's just bad business to try to compete with Wilder.[/QUOTE] Hearn said today the Usyk fight is probably going on May 17. Smart decision not…

Hopefully we get to see more up & coming US prospects fighting in the UK & vice versa. The experiance & exposure of fighting abroad is invaluable for young up & comers.

[QUOTE=giant_king;19601199]Like I said USA holds the key to a.j. being known world wide.if he's able to beat wilder then he'll be on LeBron James Usain Bolt and babe Ruth level[/QUOTE] He must be to a boxing casual or a guy…

Like I said USA holds the key to a.j. being known world wide.if he's able to beat wilder then he'll be on LeBron James Usain Bolt and babe Ruth level

[QUOTE=BoxingIsGreat;19600660]It's your opinion. I don't agree. With all the money Hearn and Dazn are throwing around, she deserves much better. She's one of their bigger stars. I don't care for feminism, I care about human rights.[/QUOTE] how is it human…