Hearn: Nobody Can Say Demetrius Andrade Still Isn't A Draw

PROVIDENCE, R.I.—With each event, Eddie Hearn is able to navigate a little easier within the American boxing market.

The latest scrapbook-worthy moment for England’s leading promoter came in Saturday’s DAZN livestream in Providence, Rhode Island. The city played host to its first major title fight in 28 years, courtesy of local hero Demetrius Andrade, who defended his middleweight title in a 12-round shutout of Poland’s Maciej Sulecki.

The bout played to an announced crowd of 7,136 in attendance at the Dunkin’ Donuts Center in Providence, far exceeding initial expectations.

“Initially, we hoped for 4,000,” Hearn told BoxingScene.com. “It would’ve still been a good crowd, it’s a nice solid number for his first fight here.” 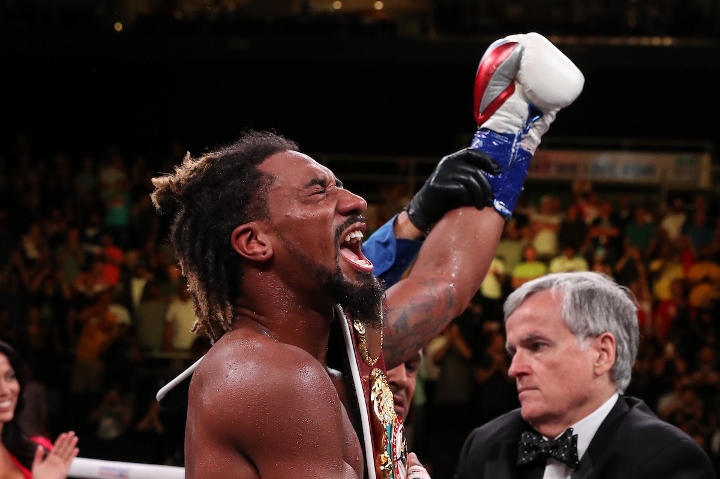 That number was reached relatively early into the promotion, with the New England town embracing Andrade’s long overdue homecoming. While having fought elsewhere in the region, Saturday marked the first time in his 11-year career where the unbeaten southpaw enjoyed a true homecoming.

“It just baffled me in 11 years that he’s never fought at home,” noted Hearn. “And it only hurt his marketability and the ability to generate any kind of buzz wherever he fought. If you’re from Providence and you’re fighting in Los Angeles, for example, how do you expect to create an atmosphere.

“But when you fight him here in his hometown, tonight it was vibrant. There was just an energy, it was electric.”

Andrade (28-0, 17KOs) gave the crowd plenty of reason to cheer early on, fighting at a far more aggressive pace than at any point he ever has before at this level. Sulecki (28-1, 11KOs) was floored in the opening round, but managed to survive until the final bell although without even coming close to winning a round.

The crowd cheered wildly whenever Andrade let his hands go, which was less frequent in the second half of the contest but still enough to make it feel like a homecoming event. The turnout helped erase the notion that he is not a draw or doesn’t bring anything from a marketing perspective to the table.

That went out the window the moment tickets went on sale for this event two months ago. Not only does it change public perception of his drawing power but also motivates Hearn’s Matchroom Boxing staff to make the next one even bigger.

“What we did, originally we just opened the bottom tier which holds 5,900,” revealed Hearn. “Then we had to open the upper tier.

“We had 2,300 seats which we didn’t open for tonight, which we hope to do as the next phase for when he comes back.”

Whenever that is, remains to be seen. The hope was to travel to Las Vegas for a showdown with Saul ‘Canelo’ Alvarez, the World middleweight champion and current unified titlist. The backup plan, a showdown with Golovkin in the event the former pursues another angle—such as a rumored shot at 175-pound titlist.

“The hard thing now is getting him the right fights,” Hearn said of his unbeaten client, a three-time titlist in two weight divisions. “Because to be honest, if I’m Oscar, I’m not letting Canelo fight him. If I’m GGG, I’m not fighting him. So now it’s up to the broadcaster to say, these are the fights we want to see.

“The difference now is, nobody can go in there and say that he’s not a draw. We erased that with this show tonight.”

So add the Rhode Island commission in the category of being extremely difficult to get any ticket sales information from. I don't know if it just an East Coast thing or what, but unlikely we will see the real numbers…

Even if he is a draw he's still just too dangerous

Joining DAZN and Matchroom has been dope for his career. Became MW champ of the world and has started pulling in 7k, in less than one year. WAR ANDRADE!

[QUOTE=BIGPOPPAPUMP;19871799]PROVIDENCE, R.I.-With each event, Eddie Hearn is able to navigate a little easier within the American boxing market. The latest scrapbook-worthy moment for England's leading promoter came in Saturday's DAZN livestream in Providence, Rhode Island. The city played host to…