Hearn: No Journalist, Media Outlet Can Tell a Fighter Where To Earn

Eddie Hearn, promoter for Anthony Joshua, is not in agreement with the ongoing criticisms regarding the decision to bring the rematch with Andy Ruiz to Saudi Arabia. The rematch takes place on Saturday.

Writers, media outlets and human rights groups have been very critical of the move - claiming the Saudi authorities are using high profile sporting events to take away the attention from the human rights issues within the country.

Amnesty International released several statements - attempting to persuade Joshua to walk away from doing the fight in the country. 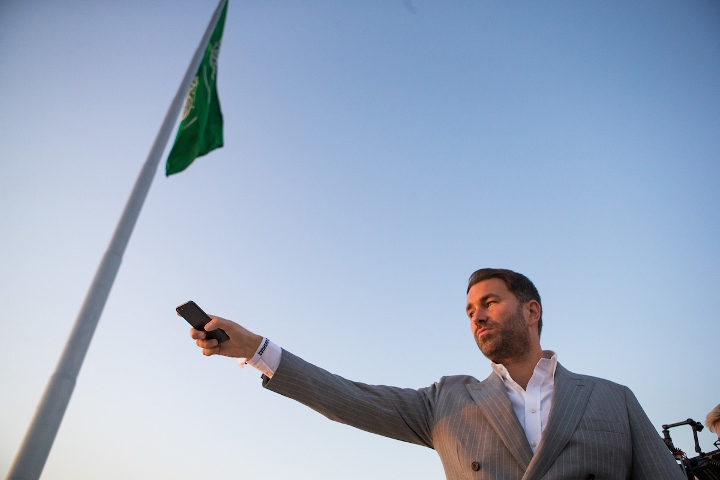 Hearn explained that his company's decision to bring the event to Saudi Arabia should not be viewed as some type of endorsement of any political or human rights issues within the country.

The decision was obviously a financial one, as Saudi officials offered up significant amount of money to secure the fight. According to reports, Joshua could earn as much as $80 million, with Ruiz earning a career high $10-12 million.

“It can’t in any way be seen to be endorsing anything, other than our job to provide life-changing opportunities to our clients who take part in one of the most barbaric and dangerous sports that exist,” Hearn said to The Guardian.

“No journalist or media outlet can possibly tell a fighter where they can’t go to earn money in a sport like this, to be honest with you. There are so many hypocrites.

“Anthony is going to go down in history – like the Thrilla in Manila and the Rumble in the Jungle – two events that also had similar controversy. He’s going to be a pioneer and change the face of boxing in the Middle East.”

For his part, Joshua states that he's only focused on the rematch - not on the negative backlash.

“I haven’t known much about Amnesty [International] because I’ve spent most of my time in Finchley just training. But as an individual I try to bring positivity and light everywhere I go. I’m just seeing it from my eyes alone but for sure the country in itself is trying to do a good job politically," Joshua told The BBC.

“For the sporting side of things, I just feel I’ve got a fight to focus on. For the future maybe I can bear a different kind of flag but at the minute it’s just the world championship flag I’m trying to bear.”

It's a little ironic seeing people voice concerns and outrage...on laptops, phones and PCs that were made in China and funnier still, driving around in cars that are fueled by Saudi oil.

[QUOTE=Tecnoworld;20235240]In fact Hearn is exactly like Don King back then. Exactly the same.[/QUOTE] i believe king killed a man,, and did time.>?

In fact Hearn is exactly like Don King back then. Exactly the same.

[QUOTE=Koba-Grozny;20233312]Absolutely believe that we should be boycotting the Saudis but I hope that those from both the UK and US who are suddenly showing outrage now are aware of the $ / £ billions in arms deals signed by both…

[QUOTE=jreckoning;20233337] Yeah, everybody over the age of 12 is a hypocrite. While taking random shots at Hearn is probably true, it is a much bigger event worldwide than the WBSS SMW finals so I can see why people would voice…