Although there are still many skeptics because their United States subscription numbers are unknown, there is no disputing that DAZN has made a big impact on the world of boxing.

Eddie Hearn of Matchroom Sport has been instrumental in DAZN's rise and his company provides the bulk of their event content.

However, he admits that his ongoing penetration of the United States market has been tougher than expected.

“I was probably a little naive thinking that the other promoters and networks would roll over and succumb to the offers I made,” Hearn told a group of reporters at the Golovkin-Derevyanchenko press conference to announce their fight on DAZN. "They stepped up as well. It was a little more difficult than I thought it would be, but we still are spending.. I haven’t spent it all. I got a lot of spare cash from the budget. We've been a little reckless. We had to make an impact on the market. But now we got the fighters, now we got the subscribers, and the platform.” 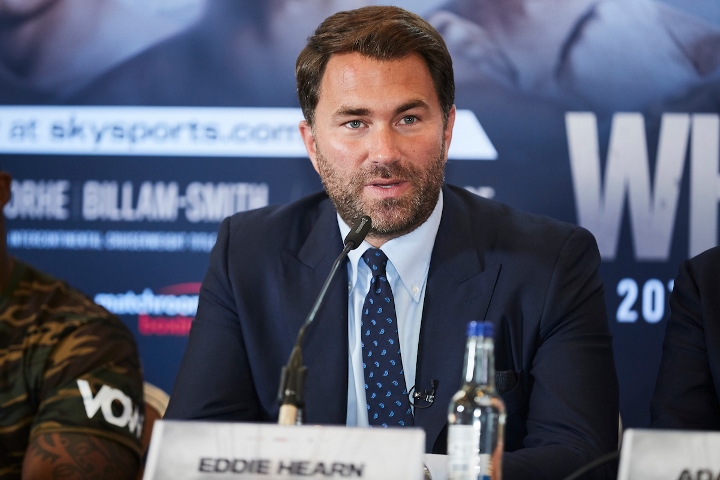 Hearn admits that he has to be a little careful with the way the marketplace is.

One fighter Hearn has tried vehemently to sign has been four division champion Mikey Garcia (39-1, 30 KO’s). Hearn has heard the rumblings from Mikey’s trainer and brother, Robert Garcia, who recently informed BoxingScene.com that they received a very lucrative offer from the British promoter.

“I saw that, one that he really can’t turn down.. they’ve lost their leverage, I might reduce the offer since he said that,” joked Hearn.

“A year ago I spoke with Mikey Garcia.  He looked at me like I was mad. He didn’t know who I was and what DAZN was... and I said to him in one year, I said give me one year and let’s talk. It’s been 10 months and look what’s going on. It’s not just Mikey Garcia. It's 5 or 6 other guys looking to jump ship to DAZN.”

[QUOTE=Oldskoolg;20009972]I’d look for individuals at middleweight, super middleweight, and possibly Nery....along with the names you mentioned[/QUOTE] Nery have been on a few PPV cards, I would think he would be in their future plans. PBC might be getting Callum Smith.…

[QUOTE=Travis scott;20010274]All the top 147 guys are with pbc though except Crawford and he ESPN[/QUOTE] He’s not a 147 pound fighter though lol. Jose ramirez got 2 of those 140 pound belts. That’s Mikey’s weight class

[QUOTE=Travis scott;20012995]You mad I caught you lying[/QUOTE] Lying about what?? Punk I've got no reason to lie about anything!