Hearn: Jacobs To Fight Canelo in May If He Beats Derevyanchenko

NEW YORK – The vacant IBF middleweight title won’t be the only thing at stake for Daniel Jacobs a week from Saturday night.

If Jacobs can defeat Sergiy Derevyanchenko in what should be a difficult 12-round, 160-pound title fight, promoter Eddie Hearn thinks there’s a “very, very, very good chance” Jacobs will earn a shot to challenge Canelo Alvarez on May 4. That’d also require the heavily favored Alvarez to defeat England’s Rocky Fielding – who, like Jacobs, is promoted by Hearn – on December 15 at Madison Square Garden and return to the middleweight division for his following fight.

Now that Alvarez has signed a five-year, 11-fight deal to have his fights streamed by DAZN, Hearn figures it’ll be easier to make an Alvarez-Jacobs bout. 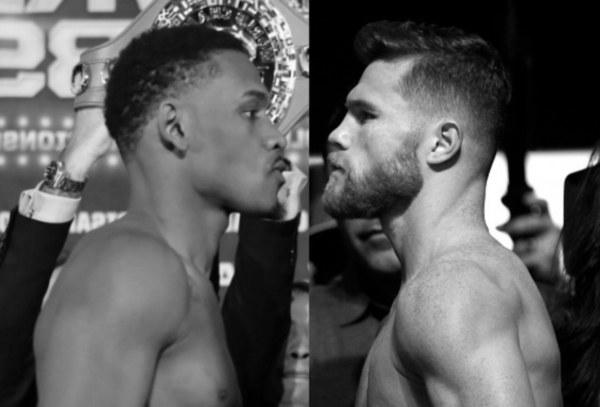 “Obviously, we’re all in the same boat,” said Hearn, whose company, Matchroom Boxing, has 32 dates per year with DAZN. “We’re all on the same platform, so I think that there’s an excellent chance that if Danny Jacobs can win the world title next Saturday that he will go on to fight Canelo in May. … That’s the carrot for Danny Jacobs.”

Oscar De La Hoya, Alvarez’s promoter, and Alvarez ultimately will choose his opponent after he faces Fielding. An Alvarez-Jacobs bout makes sense because Hearn also is aligned with DAZN and it’s seemingly more appealing than an Alvarez-David Lemieux matchup.

Jacobs’ tough fight versus Derevyanchenko (12-0, 10 KOs) will mark the end of Jacobs’ multi-fight agreement to box exclusively on HBO, which will air their fight October 27 from The Theater at Madison Square Garden. The premium cable network announced last month that it’ll move away from broadcasting boxing, which could lead Jacobs (34-2, 29 KOs) to fight exclusively on DAZN.

Alvarez’s handlers reached out to Jacobs’ manager, Keith Connolly, when negotiations stalled in June for Alvarez’s rematch against Gennady Golovkin. Jacobs was willing to battle Alvarez on September 15, but Alvarez (50-1-2, 34 KOs) and Golovkin (38-1-1, 34 KOs) ultimately came to an agreement and Alvarez won a majority decision that night at T-Mobile Arena in Las Vegas.

“The fight was actually in negotiations,” Jacobs said late in August, following a press conference to announce his fight against Ukraine’s Derevyanchenko. “Obviously, I was preparing for just the idea of it once I got the phone call. It was exciting and it was something that I would’ve took on the fly. But I don’t know, they might’ve just been using me as a pawn. You know how De La Hoya could be.”

If Brooklyn’s Jacobs does get the opportunity to face Alvarez, he is sure their fight wouldn’t go to the scorecards.

We'll see. Promoters, all promoters, talk more than they deliver.

Fair enough. Good fight. Still not sure why Charlo either isn’t stepping up or isn’t being offered. Charlo balked at a GGG eliminator, so I have to question how bad he really wants it.

Helluva fight. Jacobs doesn't have an easy task yet though! Damn I love boxing :boxing:

Got Devry in an upset. Just when you think DAZn will have all the Middleweight titlist, watch an upset will happen. I think it is more likely here than Andrade and the Namibian. Dont be surprised if Devry stops Jacobs…

[QUOTE=Ray*;19207278]Well for anyone to beat Canelo they would need to stop him, we knew that before, i dont see Charlo stopping him at this point. Jacobs is quite big for a Middleweight, and he isn't totally war-torn yet, so i…