Hearn: As it Stands, Whyte is Frontrunner To Fight Joshua

By Aaron Stokes, courtesy of The Daily Star

DILLIAN WHYTE is now the frontrunner to face Anthony Joshua in April, according to Matchroom promoter Eddie Hearn.

The 30-year-old beat Dereck Chisora for the second time last weekend, stopping his counterpart in the 11th round.

Whyte then called out Joshua in the ring after the bout, demanding a rematch between the pair next year. 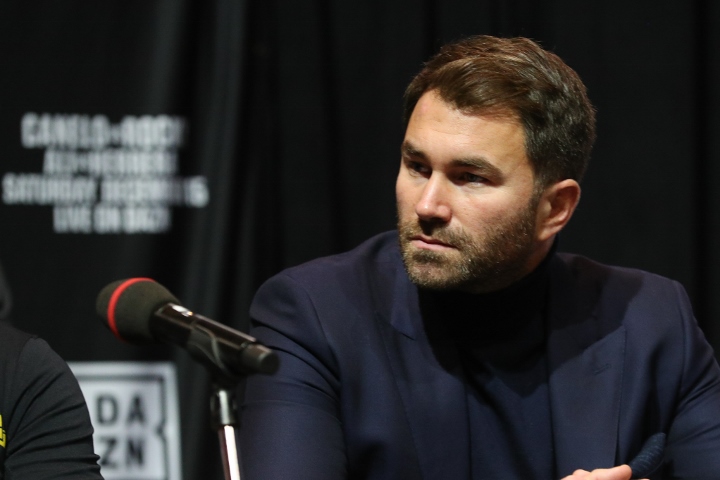 But the heavyweight champion seemed less than keen, insisting Deontay Wilder was still the front-runner for April's showdown.

However, Hearn has now offered Whyte hope, claiming the recent victor could well be at the front of the queue due to continued disinterest from Wilder's camp.

“As it stands today, I would probably say that judging by the response from Wilder’s team, Dillian Whyte is probably the front-runner,” he told IFL TV.

"They don’t like each other, but there’s a lot of money to be made in that fight. It’s a really good fight.”

But Hearn admits his side still want to make a fight with Wilder happen if possible.

“Our priorities have not changed to make the Deontay Wilder fight,” he added.

“I can’t exactly say it looks like they want the fight. We’re ready to fight Wilder.

"But maybe they can’t do a deal with Fury in the rematch.

"If you look at the polls. I saw a poll the other day. It said, ‘who do you see as the best heavyweight in the world?’ It was 44 percent Joshua, 40 percent Tyson Fury, and 6 percent Deontay Wilder.

"Although his [Wilder] profile has risen out of the Tyson Fury fight, if you’re Tyson Fury now, what deal do you accept to fight Deontay Wilder?

"But also Joshua against Whyte is a really, really good fight."

Crazy Eddie strikes again. This guy should definitely stay away from the media. He talks so much nonsense and is so desperate now that he is even talking Fury vs Joshua. Wow. Hearn ceases to amaze me with his delusional…

[QUOTE=Boxingfanatic75;19396274]I guess tongue in cheek escapes even the feeble minded. I don’t think I need to explain this to you do I?[/QUOTE] You're going to have to I'm afraid, because I don't know what you're talking about.

[QUOTE=Throwingbombs;19395080]This could well happen. Whyte is a much more dangerous fight than Wilder so AJ is legit playing with fire taking the Whyte fight.[/QUOTE] Wilder is the most dangerous heavyweight.. don't pretend like everyone doesn't already know this.. after Wilder…

Absolutely no surprise here, the management of AJ by his team is making him look like a complete b|tch.

[QUOTE=EnglishOxide;19395459]Sorry to burst your bubble champ. "I do not want to fight Joshua and will not even if Hearn offers a fair deal". That is a stone cold quote from your boy. We already know he has 35% on the…