Promoter Eddie Hearn of Matchroom has pegged Dillian Whyte (23-1, 17 KOs) vs. Joseph Parker (24-1, 18 KOs) as a must-win encounter if either boxer is entertaining the idea of going for a world title in the immediate future.

Their showdown is scheduled for July 28th at the O2 Arena in London. 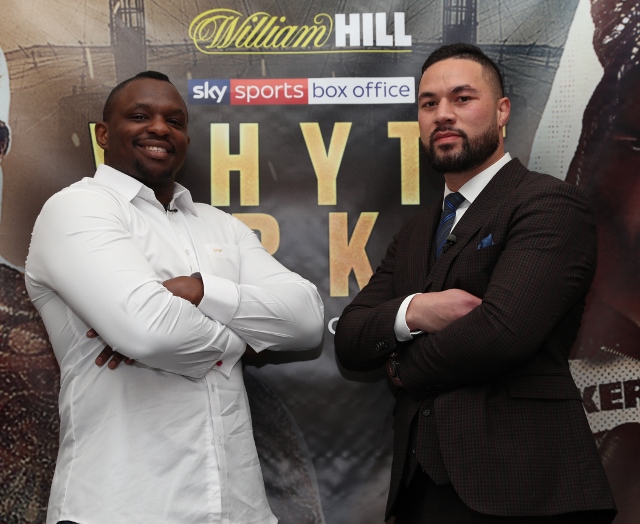 Parker became the first boxer to last the full distance with Joshua back in March, and Whyte suffered a seven round knockout loss to the British superstar in 2015.

Hearn is wrangling to make this fight a WBO final eliminator - in order to position the winner for a mandatory crack at Joshua in the future.

Joshua is scheduled to return in the fall, likely in a mandatory defense against the WBA's top rated contender, Alexander Povetkin.

Following the fight with Povetkin, the next target would be a unification with WBC champion Deontay Wilder.

Hearn is actually surprised that both boxers accepted this contest - as a loss would seriously damage each boxer's pursuit of contests against Joshua and Wilder.

"That's why Dillian should be admired by fans and I've got to say the same on Joseph Parker," Hearn told Sky Sports.

"He has just been in one of the biggest heavyweight fights of all time, against Anthony Joshua, was the first man to take him the distance but he's rolling the dice again, in a fight that could determine his future in the world heavyweight division. For Dillian Whyte, a major victory for him against Joseph Parker, could really make that Anthony Joshua fight a huge, huge potential.

"I was shocked when they both agreed to this fight because of the dangers for both guys. It is an absolute must win if they want to go on and challenge for a world heavyweight title."

Whyte is harder to deal with then Parker and is expected to win this decisively at the point hes at now ,so once again the forum majority should be wrong . Whyte is one of the few style wise that…

[QUOTE=4truth;18883393]Wtf does that even mean? Potential for what?? Potentially make Hearn a wealthier man? No one with a brain wants to see this rehash.[/QUOTE] Hearn is a carnival barking snake oil used car salesman with a stable of trash boxers…

Wtf does that even mean? Potential for what?? Potentially make Hearn a wealthier man? No one with a brain wants to see this rehash.

[QUOTE=Corelone;18882545]And this will generate 100 million dollars? Is this one of those "AJ can make more money if he fights two or three of these" type fights? He already beat both of these guys. What is Hearn trying to sell…