Hearn: I Can Only See Garcia-Vargas Being An All-Out Mexican War

FRISCO, Texas – When Jessie Vargas initially likened his fight against Mikey Garcia to one of the most unforgettable battles in boxing history, Eddie Hearn hesitated to believe him.

As they move closer toward their 12-round main event Saturday night, Hearn is becoming more and more convinced that Garcia and Vargas will produce a classic of their own.

“Jessie Vargas came up to me when we signed this fight, and he said, ‘You know, this is gonna be like Morales against Barrera,’ ” Hearn recalled during a press conference Wednesday at the Omni Frisco Hotel. “And I said, ‘Wow! That’s strong. That’s the sort of thing that a promoter would say.’ And as we get closer and closer, I can only see this fight being an absolute war, an all-out Mexican war.” 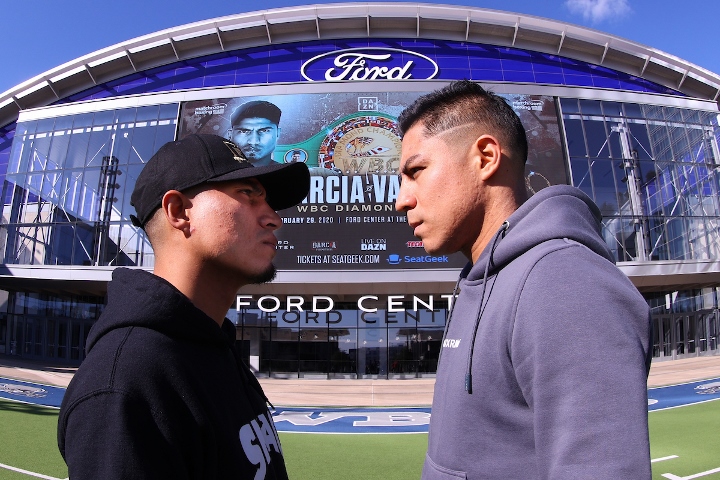 Mexican legends Marco Antonio Barrera and Erik Morales engaged in one of the most brutal brawls of the 21st century when they first fought in February 2000 at Mandalay Bay Events Center in Las Vegas. Their spectacular slugfest, a 122-pound championship match Morales won by split decision, was voted “Fight of the Year” for 2000 by numerous media outlets.

That’s obviously an extremely ambitious benchmark, but Hearn senses Garcia (39-1, 30 KOs) and Vargas (29-2-2, 11 KOs) will deliver memorable performances in a fight DAZN will stream live from Ford Center at The Star, the Dallas Cowboys’ training facility.

“Mikey Garcia is a four-weight world champion, one of the greatest fighters of the modern era, also one of the most stubborn individuals in the world,” Hearn said. “Because everybody says to him, ‘Mikey, you’re better at 140.’ [Garcia says], ‘No, I can win a world title at 147.’ Jessie Vargas was moving up to ’54. I said, ‘Do you like the Mikey Garcia fight at 147?’ [He said], ‘Sign me up.’ That’s exactly the kind of fight that I want in boxing. These two are an absolute credit to the sport of boxing. It is such a great fight.”

The 32-year-old Garcia, of Moreno Valley, California, will end nearly a one-year layoff versus Vargas. The former four-division champion hasn’t boxed since IBF/WBC champ Errol Spence Jr. (26-0, 21 KOs) soundly defeated him in his 12-round, 147-pound debut last March 16 at the Cowboys’ AT&T Stadium in nearby Arlington.

The 30-year-old Vargas also has experienced a lengthy layoff. Las Vegas’ Vargas last fought April 26, when the ex-two-division champion knocked out Mexican veteran Humberto Soto (69-10-2, 37 KOs) in the sixth round at The Forum in Inglewood, California.

“For Mikey Garcia, who has so much to prove at 147 – nothing to prove in the sport of boxing, but can he do it?,” Hearn said. “Can he become a five-weight world champion, and win the WBC diamond belt on Saturday and go on and challenge for a world title this year? For Jessie Vargas, a two-weight world champion, can he cause what some may see as an upset? But as the weeks have gone on, the phone calls have come in, saying, ‘You know what? I think Jessie Vargas is gonna do this, you know?’ A lot of people in boxing are starting to get on that bandwagon.”

Garcia is consistently listed as at least a 4-1 favorite over Vargas.

Garcia is being paid 7 million and is not in shape. Looks like an out of shape chubby lightweight.

I got my money on the Mexican

[B][I]Jesse needs to employ the same strategy as Spence May not be able to completely sweep Mikey the way Errol did but it should be effective enough to win the fight. OR jus war it out.[/I][/B]

[QUOTE=megas30;20429741]Vargas has fallen into that "Power" Trap. Since hurting Bradley and Stopping Sadam Ali, Vargas has seemed to believe he has dynamite in his fists and have abandoned his boxing ability, albeit being a damn good boxer.[/QUOTE] He does seem…

This should be a great fight. I'm looking forward to it.