Eddie Hearn, promoter for heavyweights such as Anthony Joshua and Dillian Whyte, was never really impressed with Tom Schwarz.

Last week, he predicted a mismatch would take place when Tyson Fury made his Las Vegas debut against Schwarz at the MGM Grand in Las Vegas.

The contest was even less competitive than anyone expected, as Schwarz was blown out in two one-sided rounds. 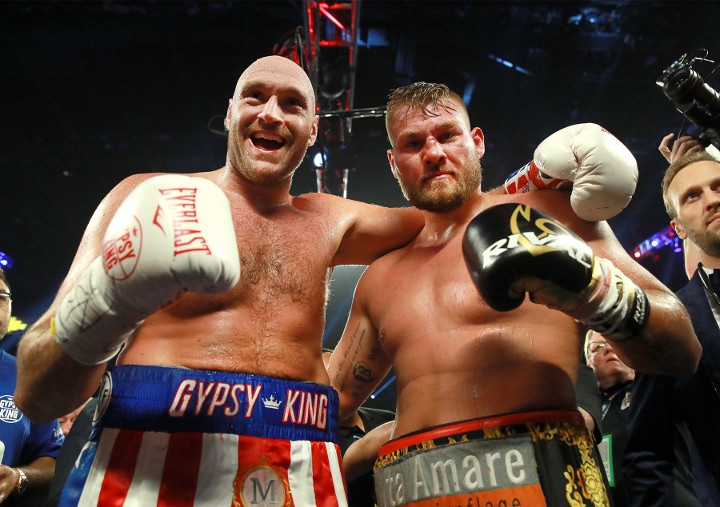 It was Fury's first bout since going to a controversial draw with WBC world champion Deontay Wilder.

The contest was also Fury's first of a lucrative multi-fight deal with Top Rank and ESPN.

Hearn was far from impressed with the win, and felt the undercard was a huge stinker.

"What do I think about Tyson Fury? I think congratulations, you made great money to fight someone who probably couldn’t win a European title, or couldn’t win a British title, in Tom Schwarz. Tyson is an amazing entertainer, a great fighter etc. etc. but it was what it was. It was an exhibition, that’s what it was, it was never going to be a competitive fight, there was no undercard whatsoever," Hearn told IFL TV.

Hearn states that if he placed Joshua in a similar fight, with a similar undercard, the media would have crucified him.

"I don’t want to criticise Tom Schwarz but I’m not sure he’d win a British title," Hearn told Boxing Social.

"For Tyson, again… amazing entertainer, and good luck to him, made a load of money from a fight that was never going to be competitive for one second.

"You get a lot of stick, you look at the product you are producing ie: Joshua vs Ruiz and everything that went underneath it [on the undercard], and then you look at that as a pay-per-view event, and I think, 'f*** me, you do get away scot-free' because I would have got hung if I put that [Fury-Schwarz card] on.

Shut up Hearn you worm, just because you weren't involved.

[QUOTE=Jkp;19843755]I give Anthony Johnson full credit for being able to make this illusion last as long it did. The black david price can now rest easy knowing he banked a few pay days, and bought a few belts before he…

I didn't even bother to watch it, I knew I'd be spending 20 mins max on youtube watching this whole fight. How you can justify charging people in the UK £19.99 for that night of boxing I'll never know.

Show for las vegas audience. Wake me up when Fury fights top 20 guy.