Hearn Explains Why WBC Was Wrong To Order Loma-Campbell

Earlier this week, the World Boxing Council made a controversial decision to order a world title fight, for the vacant WBC lightweight belt, between Luke Campbell and Vasiliy Lomachenko.

The title was recently vacated by Mikey Garcia, who back in March moved up to the welterweight division to challenge Errol Spence.

Campbell was the mandatory challenger to the title. Lomachenko was not even ranked by the WBC, and he was the world champion of two rival organizations - the WBA and WBO. 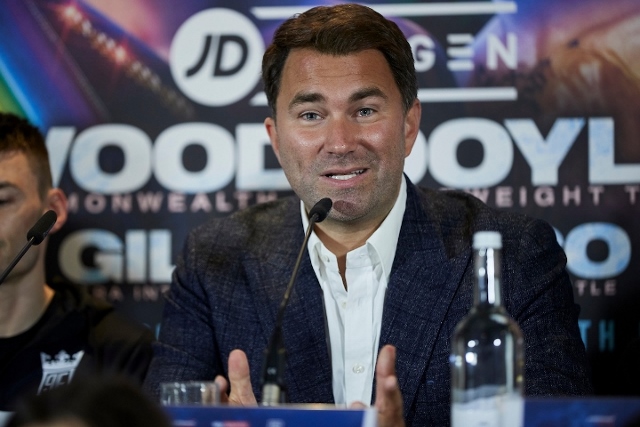 Under normal circumstances, with any other sanctioning body, the two highest ranked, available contenders, would fight for the vacant belt.

Hearn, promoter for Campbell and undefeated Devin Haney, was expecting his two fighters to battle for the vacant belt in July.

Haney was ranked at number three by the WBC. The number two ranked fighter is Zaur Abdullaev - but Hearn was concerned that Abdullaev, due to Ramadan, would not be available to face Campbell.

To make matters worse - Abdullaev and Haney were ordered to take part in a four man tournament to determine a mandatory challenger - Teofimo Lopez and Javier Fortuna were the two other boxers thrown in to this tournament. [The WBC issued new rankings on Friday, where Lopez is now ranked at three and Haney was demoted to four.]

Even before this order was issued, Lopez was never going to be in this tournament, as the boxer is already scheduled to take part in an IBF final eliminator.

Hearn believes, and so do many other observers, that the WBC made this odd decision in order to achieve their goal of having Lomachenko as their world champion.

And to make things even easier for Lomachenko, the WBC created a four man tournament to bypass their own longstanding rule - where a fighter who wins a vacant world title is then obligated to make back to back mandatory defenses. If Lomachenko defeats Campbell, and is then ordered to make back to back defenses - the WBC knows he would quickly vacate. But a four man tournament would stall a mandatory defense until late 2020 at the earliest.

"The downside with [the WBC's order], in my opinion, is that it was the wrong decision from the WBC. Because I saw Ron Lewis tweeted today... he said, ‘The WBC, all they’re doing is putting the best fighter in the world in with the mandatory challenger.’ But what about all the other people that have been working up - not just Devin Haney, but Abdullaev, who was number two," Hearn told IFL TV.

"I’m not sulking because Devin Haney didn’t get the shot. I’m just saying that the whole point in working your way up a governing body, challenging for and defending minor titles, paying sanction fees, being loyal to one governing body, is that when a title frees up, it goes down the ranking and you get your shot. So if I’m Abdullaev and I’ve won the silver title and I’ve defended it a couple times - I’m thinking, ‘This is great, Mikey Garcia’s vacated, it’s Luke Campbell versus me.’ That’s the rules of the WBC, the first two available fighters [will go for the vacant title].

"What’s worse than that is another rule of the WBC... is if there’s a vacant title, the winner must fight two mandatories. Well now they’ve done a semi-final elimination thing between Haney and Abdullaev, which is an eliminator that was already ordered, and now Fortuna against Teofimo Lopez, who’s actually taken another fight anyway. But where’s Fortuna come from? It should just be Haney vs Abdullaev for the mandatory. It’s a mess.

"I completely understand why the WBC have done it - because they want Lomachenko as their champion. I understand that, I just don’t think it’s fair for the others. But at some time the shoe will be on the other foot, and one day if the heavyweight WBC championship becomes available - I’m sure they’ll allow [Anthony] Joshua to fight the mandatory for that title.

"But would they allow [IBF champion] Richard Commey to fight for the vacant WBC world title against Luke Campbell? Absolutely not. I just felt they should go down the rankings. What has Lomachenko done to deserve a WBC shot? He’s just won a couple of other [world titles] and just strolled straight in. You’re not ranked if you’re a champion with another governing body - but you know [how it goes]."

[QUOTE=victorythagr8;19737074]Both party of our government is corrupt and bought off by lobbyist. Both Mitch McConnell and Nancy Pelosi have history of **** **** in this country.[/QUOTE] True! We should be focused on lowering taxes for the middle class but neither…

[QUOTE=MisanthropicNY;19733655]Well the Democratic Party is 100% corrupt and Arum is a member = Arum is corrupt. Arum basically runs the WBC when he wants to put together a fight.[/QUOTE] Both party of our government is corrupt and bought off by…

[QUOTE=WBC WBA IBF;19736917]You're wrong. Hearn has more pull in the WBA than any promoter in the world and he lobbied hard. He may have publicly pretended it was all Klitschko's idea, but don't act like you have any idea what…

[QUOTE=Fabes88;19734040]Hearn didn’t actively partition for that fight to be for the belt[/QUOTE] You're wrong. Hearn has more pull in the WBA than any promoter in the world and he lobbied hard. He may have publicly pretended it was all Klitschko's…

This is no different that the time the VACANT WBA title was on the line and AJ was allowed to fight for it. Wald petitioned the WBA to sanction the fight and at first they said no. Then an additional…