Hearn Explains Why PEDs are 'A lot Worse' in U.S. Boxing Market

Veteran promoter Eddie Hearn believes the United States market has a much bigger PED [performance enhancing drug) crisis in comparison to the UK - at least when it comes to boxing.

Hearn was blown away by what recently happened with heavyweight contender Jarrell Miller. 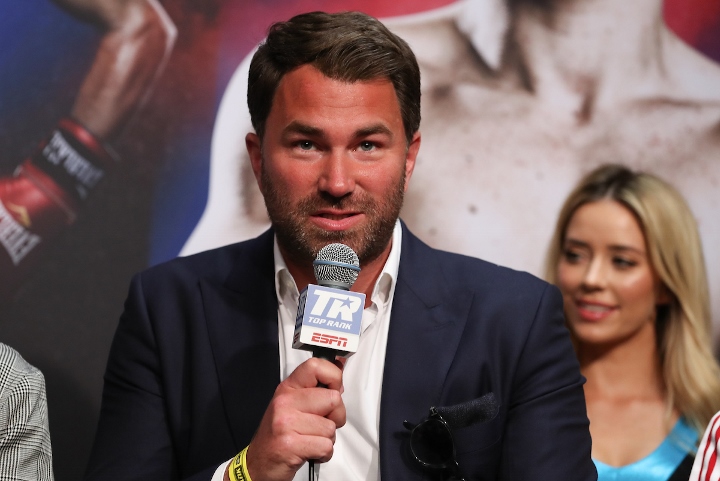 But then Miller failed three pre-fight drug tests - coming up positive for banned drugs like EPO, HGH and GW1516.

In the UK, the British Boxing Board of Control is always randomly testing boxers through UKAD [UK Anti-Doping].

Hearn explains that no similar system exists in the United States, and there are even boxing enrolled in the WBC's Clean Boxing program who are not tested on a regular basis - and some not tested at all.

“The more time I spend around American boxing, I do feel the problem is a lot worse over here than it is in the UK,” Hearn said to BoxingScene.com.

“Only because the British Boxing Board of Control have UKAD random testing for fighters, you have absolutely no testing over here. The WBC testing, they’re doing a great job, but they can’t be tested all the time.

“I’ve got guys who have signed with me and signed up to WBC testing, they’ve never been tested. There are fighters out here who are never getting tested until fight night. It just opens the door, there’s no fear of getting caught. With what’s at stake in the sport right now, these people will be cheating to get an edge to win.

[QUOTE=Nehnenqui;19693740]My post you replied to I said 95% of U.K. fighters are TRASH and get put in their place by NORTH AMERICANS. The United States and Mexico are in North America you retard. I listed the best the U.K. has…

[QUOTE=Sid-Knee;19693176]You wrote all this without giving me wins over Brits that Americans have over the last 40 years? Well, if you're retarded and want to waste time for no need you would. What this has to do with Mexicans only…

[QUOTE=TheCell8;19692212]Boxing needs a random program like the UFC has with USADA where fighters are randomly tested year round. That's the only way it's truly effective. [B]The issue is that it's very expensive to test every fighter out of competition randomly.[/B][/QUOTE]…

[QUOTE=LetOutTheCage;19693230]Canelo the cheat? Yeah that really worked out right? I said it recently, the US have a problem with PED use, people can try and deflect and give example of UK fighters but that doesnt change the fact that an…