Hearn Explains Why DAZN Venture Can't Be Compared To PBC

Last week, it was announced by Eddie Hearn of Matchroom Sports the formation of an American affiliate (Matchoom USA) and a new streaming platform(DAZN) that will produce 16 fight cards in the States a year beginning this September and will have a budget over a billion dollars over an eight year stretch.

The venture is a partnership between Hearn and international media company Perform Group.

Hearn made it clear that he will be signing new boxers to add to his already deep stable that includes IBF heavyweight titlist, Anthony Joshua (who at least initially will not be a part of this package). 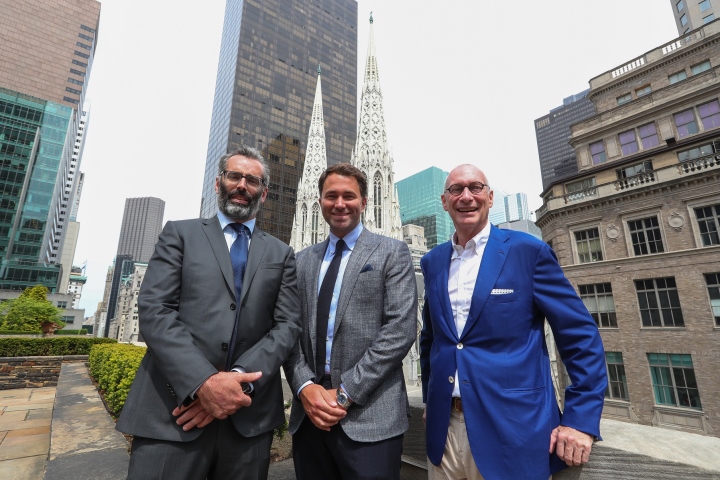 Some wonder if this is just another version of what the Premiere Boxing Champions [PBC] tried to do a few years ago as they flooded the market back in 2015.

PBC came out flying, with a war chest of money from investors, as they signed an army of fighters and were staging fights on NBC, Spike TV, Fox, Showtime and other outlets.

But eventually the war chest of money dried up, and so did the televised dates - which were predominantly time buys.

"Well, they didn't have a platform, they bought airtime - that's the first thing. They had no broadcaster paying them money. They had an investment group that gave them money to acquire fighters, which they did very well but they didn't make progress with the money," pointed out Hearn, when he was asked this question.

Hearn pointed out,"We have bigger rights fees than HBO, Showtime put together. But if I fail, I've really done a bad job."

[QUOTE=Scipio2009;18787788]You're drastically overstating the reach of the World Cup, especially to countries with no team in the tournament and to countries without a real chance to win. Germany is a really good national team; if you're earnestly trying to argue…

[QUOTE=Szef;18786094]World Cup isn't a 'secondary' event. It's the biggest sport event on the planet, along with Olympics. As the poster said, getting the rights to world cup is a statement. Germany isn't America where domestic leagues are the most important…

[QUOTE=Scipio2009;18786055]Getting Bundesliga in Germany would be a far stronger statement of intent, because that's the type of thing that they're competing against to become "Netflix of Sports". Picking off events that are secondary or further to the home market can…

[QUOTE=Randall Cunning;18784520]Theyve just got the World Cup in Germany, thats pretty damn major. Some statement of intent[/QUOTE] Getting Bundesliga in Germany would be a far stronger statement of intent, because that's the type of thing that they're competing against to…

[QUOTE=Scipio2009;18779561]DAZN has been in Germany for however long, are supposed to be flush with all this money, yet they can't get Bundesliga? Beyond that, you're overstating BT Sports' position in a pretty silly way; they have Champions League, but Sky…