Promoter Eddie Hearn has always had a hard time when it came to negotiating with Chris Eubank Jr. and his father, Chris Eubank Sr.

In 2016, Hearn was attempting to put together a deal with Eubank Jr. As part of that deal, Eubank Jr. would have collided with then unified middleweight world champion Gennady Golovkin in the UK.

The deal never came together, with then IBF welterweight champion Kell Brook accepting the monetary terms. Brook jumped up by two weight classes to fight Golovkin. 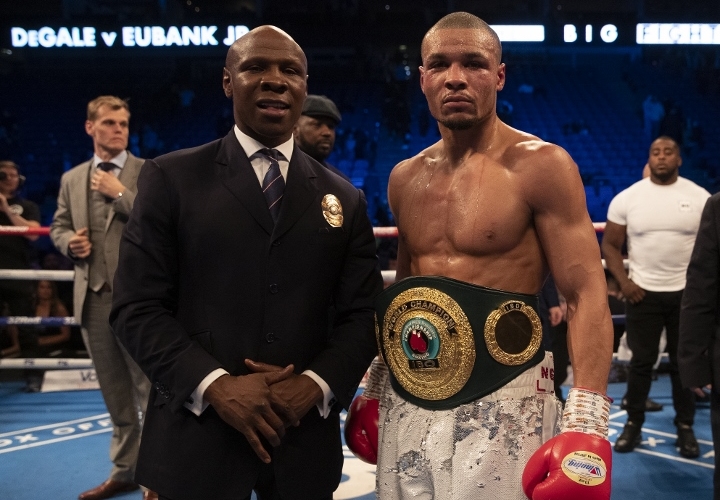 It's explained by Eddie that in order to close the agreement, Eubank Sr. (negotiating on behalf of his son) was demanding a particular photo in Barry Hearn's office. A photo that the elder Hearn refused to part with.

“So I was trying to do a deal with Chris Eubank Jr. It was me, Chris Eubank Jr and Chris Eubank Sr negotiating a deal. We’d agreed all the terms of the deal," Eddie Hearn told BBC5 Live, according to Talk Sport.

“Then Chris Sr looked at me and said, ‘Edward, there’s one more thing. In your father’s office is a picture of me punching Nigel Benn. It also has the official scorecards from the fight, you must remove the picture and give it to me. If you do I will sign the deal.’

"So I’m like, ‘Okay, I’ve just given you a load of money and everything you want, and now you want a picture off the wall in my Dad’s office?’ ‘Yes, this is correct.’ I said, ‘Okay, sounds alright to me.’ Went into my Dad’s office, ‘Alright Dad, it was quite painful, but we’ve done the deal. Just one thing, you know that picture over there, can we have that?’

“He said, ‘Well what do you mean?’ I said, ‘Well Eubank said if you give him that picture the deal’s done.’ He said, ‘Tell Eubank to go and stick it up his behind, that is my favourite picture in the world and there is no way I’m removing that from my wall.’ I said, ‘It’s only a picture, innit?’ He said, ‘No, no, no, son. Not even up for discussion.’ So I had to go back and say to him, ‘Chris I’m really sorry, we’ve got a deal, but I can’t deliver you the picture.’

“He said, ‘Then there is no deal because the picture will paint a thousand words and this is part of the deal, a major moment to secure the paperwork.’ And I just said, ‘Leave me alone, go away.’ And we’ve never worked together again. No deal.”

[QUOTE=Curt Henning;20561982]i respect you for keeping it real with that post and yeah degale had another fight...but i dont think it was anything special...they could have scrapped that fight for a bigger fight degale/golovkin.....but golovkin didnt fancy that type of…

[QUOTE=Curt Henning;20562026]i respectfully agree to disagree[/QUOTE] I hear ya man. World would be a dull place if we all saw things the same way anyways.. :lol1:

[QUOTE=Citizen Koba;20562020]It's an opinion, man. I followed the dude from about 2011 and through all the ups and downs, all the big fights he tried to get but fell through for one reason or another, often genuinely through events that…

[QUOTE=Curt Henning;20562006]nah i totally hear you...the mark of intelligence is to be able to hear/understand both trains of thought without accepting them as truth i get it....its just...when i look at golovkins career and how it has played out i…

[QUOTE=Citizen Koba;20562002]Sure I'm open to the possibility, man. I already said it ain't impossible... I don't trust any of these f[I]u[/I]ckers.:lol1: Equally though my approach is to give the benefit of the doubt to [I]all[/I] fighters until it's proven otherwise.…