Hearn: Davis A Bigger Name, Should Get 60-40 For Farmer Fight

The British promoter now knows how hard it is to sell boxing tickets in the United States, thus he was beyond impressed with the capacity crowd of 14,686 that turned out for Davis’ last fight, July 27 in his hometown of Baltimore. Hearn readily admits Davis is a bigger star than Tevin Farmer, the 130-pound champion Hearn’s company co-promotes.

Where Hearn disagrees with Mayweather and Ellerbe, CEO of Mayweather Promotions, is how they should go about putting together and televising or streaming the Davis-Farmer fight, which Mayweather has said he wants to make next. 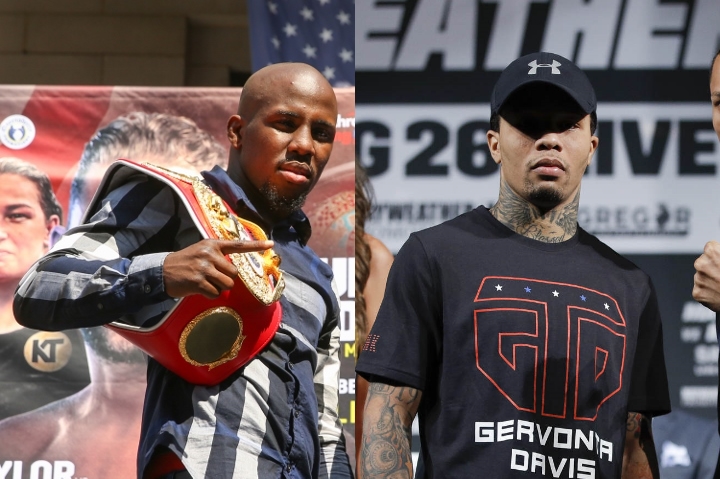 Hearn has offered Davis (22-0, 21 KOs) what would be a career-high purse of $5 million to fight Farmer if DAZN were to stream their 130-pound title unification fight. Philadelphia’s Farmer was offered $2 million to face Davis in what presumably would be a pay-per-view fight distributed by Showtime, which has televised Davis’ past six fights either live on that premium cable network or as part of a pay-per-view card.

“Me and Floyd should just agree what the split for that fight should be, all right?,” Hearn told a group reporters after the Gennadiy Golovkin-Sergiy Derevyanchenko press conference Thursday at Madison Square Garden. “For me, Gervonta Davis is the bigger name. All right? He sells more tickets; he’s a big star. Tevin Farmer’s a star, but he’s coming through. For me, it’s a 60-40 split. See if they agree with that. If they don’t, we can talk about that. So, me and Floyd, we meet up, we both put our bid in the envelope and we open it together. And whoever pays the most money for that fight gets the fight on their platform. Just one fight. All right? So, you haven’t got to sign a long-term deal. Just let the fighters earn their money.”

Hearn believes Davis, the WBA “super” 130-pound champion, wants that long-discussed fight just as much as Farmer, the IBF junior lightweight champ. He also realizes Davis is committed to following Mayweather’s plan, which includes Mayweather remaining loyal to Showtime, with which he made record-breaking purses toward the end of his celebrated career.

“Tevin Farmer wants that fight,” Hearn said. “Gervonta Davis wants that fight. If you said to Gervonta, ‘Do you want $5 million to fight Tevin Farmer?’ He’d be like, ‘Yes, please. I’ve got a unification [fight]. I’ve got the biggest payday of my career. And I’ve got a fight that I want.’ But it’ll probably be more than that [$5 million], if we do closed bids. So, I don’t know whether they’ll agree to that, but like if you wanna out-bid, you’re Floyd ‘Money’ Mayweather. I’m just little, old Eddie Hearn. I ain’t got your kind of money. So, let’s go in there, agree to split beforehand, find the number that everybody’s willing to fight [for] and say, ‘Good luck to the fighters.’ Because that’s what really matters – the fighters.

“So, let the fighters earn their money. Don’t let the ego or networks, because DAZN don’t have the ego … where they’re saying, ‘No, we are not letting Tevin Farmer fight on another [network].’ They said to me, ‘Eddie, you do what you feel is right.’ And what I’m saying is right is never obstruct a fighter from making a career-high payday if he has to take a fight on another platform. Jose Ramirez just did it. Bob Arum let him do it. He come back with two belts [after beating Maurice Hooker]. You know, if Gervonta’s as good as he says he is, and he is a good fighter, he comes back to Showtime with two belts.”

Gervonta should get 80%. Farmer is nobody and he beat nobody good.

[QUOTE=BoloShot;20021163]True that any top level opponent would smoke him. He actually has quite a leaky defense. Drops a lot of rounds (to lesser opposition no less) for a supposedly untouchable slickster.[/QUOTE] Very Leaky defense youre right. He should just fight…

[QUOTE=jas;20016410]davis should get way more than 60% probably 75% [B]showtime offered farmer [U]2mil[/U][/B] dazn offered davis 5 mil presuming showtime would have given davis 5 mil themselves, thats a 70-30 split which is fair the notion that showtime or davis'…

[QUOTE=BoxingIsGreat;20018468]This Farmer fight isn't necessary. Mismatch. Not sure Gervonta even cares about the belt he has. He should drop it and save his money. Don't you think so? Take a tune up against Fortuna at 135 next and then fight…

[QUOTE=Calibaloc;20016780]Exactly. I dont see why people are so big on him. He will get exposed soon. I dont even think he beats Jojo Diaz far less Tank smh[/QUOTE] True that any top level opponent would smoke him. He actually has…