Hearn: Crolla is Fine, Never a Disgrace To Lose To Lomachenko

Anthony Crolla emerged from a conclusive fourth-round stoppage by Vasyl Lomachenko with his health and pride intact, according to promoter Eddie Hearn.

Crolla’s challenge for the WBA and WBO lightweight titles held by Lomachenko ended in brutally one-sided fashion in the early hours of Saturday morning at Los Angeles’ Staples Center.

The former world champion from Manchester survived a standing eight-count in the third but the fight was over a round later. 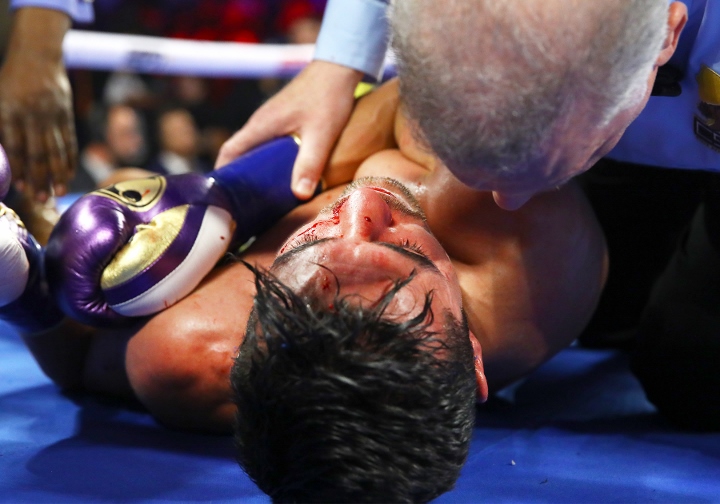 “After he was counted out he got up and was fine. But he’s devastated. He said: ‘I’m just so gutted for the team because of the work they did’. I’m like: ‘Don’t worry about the team, you just fought pound for pound number one’.

“Everybody said to him – (promoter) Bob Arum, every fighter at ringside – ‘There’s no disgrace in that, mate’.

“You’re mandatory challenger, what else are you going to do? You get a shot at Lomachenko, you’ve got to take it. But he was just too good.

“Unfortunately in the fourth round Crolla knew he had to do something and go for it. When you do that against Lomachenko, you leave yourself wide open with gaps. Lomachenko was too good for Anthony.

“This shot came against the head, you can’t not take this opportunity. Losing to Lomachenko is never a disgrace.

“He can have zero regrets because he prepared the best he could, it’s just about levels. Who is going to beat Lomachenko?”

Lomachenko, a two-time Olympic champion, justified his overwhelming favourite status with a clinical 13th win of his professional career.

Agree with everybodies comments , I'll just add this thirst for greed , leverage and power in boxing will ruin a lot of people's lives .

Amazing that Crolla was pit through thay, considering not long ago he was in a coma with a fractured skull after being attacked by thugs. He definitely did not look alright on that stool.

I guess if you say it enough people will start believing it.

Mikeys gonna pull a Canelo and drop his belt... no need to get pummeled by Spence and then end your career with a Loma "No Mas" or Lights Out!

That was one of the biggest mismatches of the year, 100 to 1 at the bell. Other than that and he got run over like a penny on the train track, it wasn't a disgrace.