Haye: Usyk-Chisora Likely To Be Rescheduled For Some Point In October

Oleksandr Usyk and Dereck Chisora apparently won’t have to wait too much longer for their fight to be rescheduled.

David Haye, who manages Chisora, told Sky Sports News on Wednesday that Usyk-Chisora likely will take place sometime in October. The former heavyweight and cruiserweight champion didn’t mention a date or site for their heavyweight fight, which will headline a Sky Sports Box Office pay-per-view event. 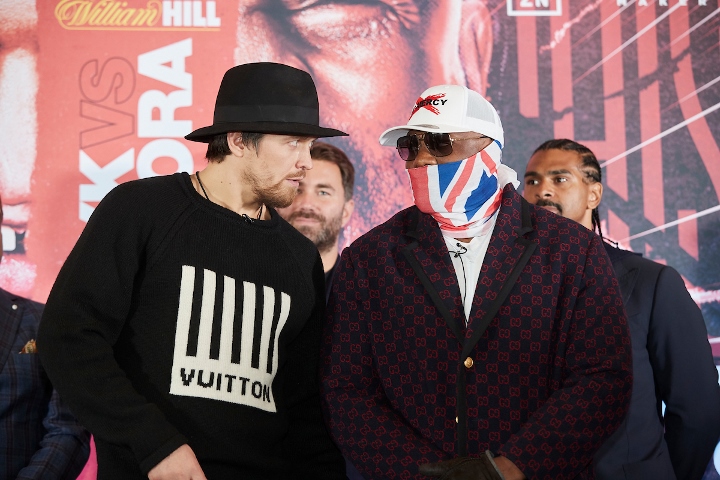 Ukraine’s Usyk (17-0, 13 KOs) and England’s Chisora (32-9, 23 KOs), both of whom are promoted by Hearn’s Matchroom Boxing, were supposed to meet May 23 in a 12-round heavyweight fight at O2 Arena in London. Their 12-round bout was postponed indefinitely due to the COVID-19 pandemic.

The 33-year-old Usyk, a former undisputed cruiserweight champion, is the WBO’s mandatory challenger for one of Anthony Joshua’s four heavyweight titles. The 2012 Olympic heavyweight gold medalist also is ranked second by the WBA and WBC, and third by the IBF.

Chisora is rated ninth by the IBF, WBA and WBO, and 12th by the WBC.

The 36-year-old Chisora has nine losses, but he is a more imposing opponent than Chazz Witherspoon. The left-handed Usyk stopped Witherspoon after seven largely lopsided rounds October 12 at DePaul University’s Wintrust Arena in Chicago.

Usyk’s win against Witherspoon (38-4, 29 KOs) marked his first fight in the heavyweight division after giving up the IBF, WBA, WBC and WBO cruiserweight titles last year.

The Zimbabwe-born, London-based Chisora last fought October 26, when he stopped England’s David Price (25-7, 20 KOs) in the fourth round at O2 Arena. He has won three straight bouts since Whyte knocked him out in the 11th round of their closely contested rematch in December 2018 at O2 Arena.

Nearly september and this fight is gonna happen in october? Has anyone heard something about this?

[QUOTE=LoadedWraps;20683237][COLOR="Green"] I'll pay for it. A great fight to me on paper. Hard to find a better gatekeeper gauge for Usyk, we know who Chisora is and he is willing to bang and comes to fight. A good fight to…

If Del Boy can't impose his size/strength on Usyk and allows Usyk to get into his rhythm I can see a corner stoppage. If Usyk is outboxing him in the later rounds with Del being gassed and it is clear…

[QUOTE=LoadedWraps;20683405][COLOR="Green"] I do have the disposable income and I will. I'm doing very well right now, rebounding after a tough stretch, and am in a good place. I don't disagree from principle stand point, most PPV and subscriptions are over…

[QUOTE=REDEEMER;20683394]Kabyle did nothing but run and get hit by the cleaner shots which is why one judge scored it a draw but besides that are you stating Kabayel is better then Whyte and some other guys he fought because Kabayel…