NEW YORK – Lorraine Villalobos nearly ruined what was supposed to be an important moment Saturday night for Louisa Hawton.

Villalobos knocked down Hawton and gave her a much more difficult fight than Villalobos provided a year ago. All three judges still saw the action the same, 95-94, for Hawton, who won a unanimous decision and retained her WBC interim atomweight championship on the Jermall Charlo-Dennis Hogan undercard at Barclays Center in Brooklyn.

Los Angeles’ Villalobos gave Hawton everything she could handle, however, by consistently connecting with her left hook. One of those counter left hooks dropped Australia’s Hawton (10-2, 5 KOs), better known as “Bang Bang Lulu,” late in the sixth round. 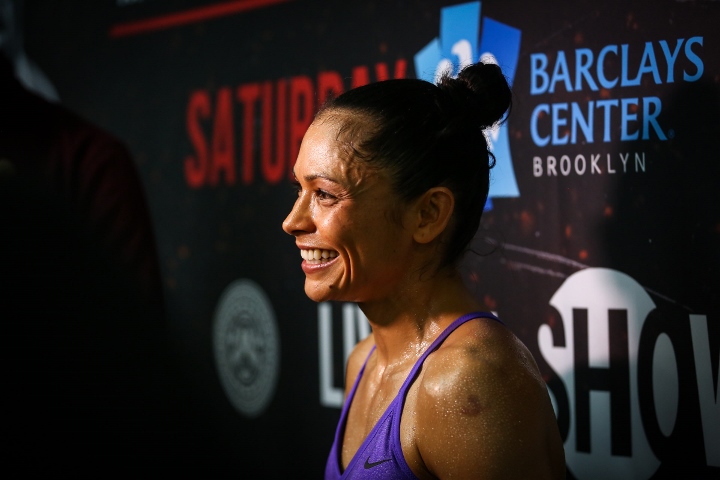 Hawton withstood that trouble and pressed the action as Villalobos (4-3, 2 KOs) wore down during the final few rounds.

The 34-year-old Hawton retained her title in a division for women who compete at a 102-pound limit. Hawton hopes her win Saturday night leads to a shot at the WBC’s world atomweight champion, the Czech Republic’s Fabiana Bytyqi (15-0-1, 5 KOs),

Hawton stalked a fading Villalobos in the final two rounds and kept the challenger on her back foot. Villalobos had trouble fending off Hawton in those final four minutes and resorted to holding at times.

Villalobos and Hawton hammered away at each other with power punches during the final 10 seconds of the eighth round. Hawton finally did a better job in that round of blocking Villalobos’ left hook.

Hawton came back from a sixth-round knockdown to make the seventh round competitive.

A counter left hook by Villalobos knocked down Hawton just before the sixth round ended. Hawton took her time, but she beat referee Sparkle Lee’s count.

The round ended before the action could continue.

Hawton had more success in the fifth round than she experienced in any of the first four rounds.

Hawton connected with an overhand right late in the first round. Villalobos had some success with her jab earlier in the opening round.

This fight was better than the Bodybuilder vs the Mexican Butterbean. I'd definitely let Hawton blow me for sure - she can have the honor. One of the best female boxing fights I've ever seen and one of the only…