Hatton: I Would've Beaten Anyone Night I Fought Tszyu, Including Mayweather

Ricky Hatton is convinced no one would’ve beaten him on the night he upset Kostya Tszyu.

Not even Floyd Mayweather.

One of England’s most beloved boxers explained during the newest episode of Sky Sports’ “The Boxing Show” that the way referee Dave Parris permitted him to work versus Tszyu in June 2005 would’ve enabled him to defeat even the best boxer of his generation.

“Against Kostya Tszyu, with a referee who let the fight flow at a distance and up close, I would have beaten anyone that night, including Floyd,” Hatton said. “I’m not saying I was a better fighter than Floyd. But the right tactics on the right night at the right time? Even the best can be beaten. If I fought him on that night, I think I might have beaten him.” 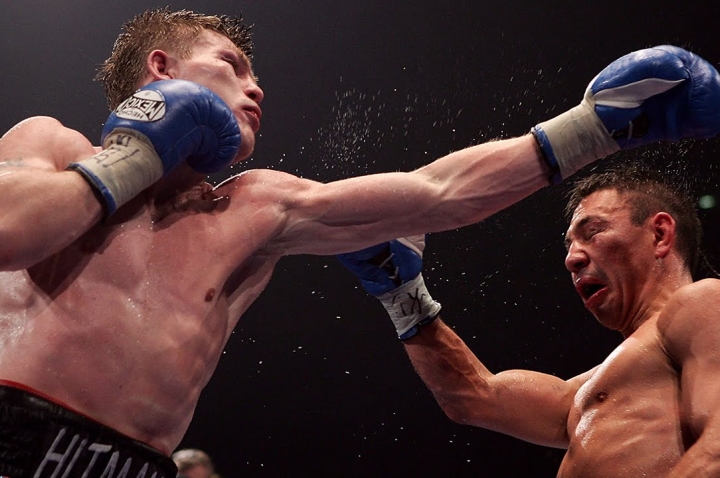 Mayweather stopped a then-unbeaten Hatton in the 10th round of their fight for Mayweather’s WBC welterweight title in December 2007 at MGM Grand Garden Arena in Las Vegas. Hatton moved up from the junior welterweight limit of 140 pounds to 147 to challenge Mayweather.

Beating Tszyu 2½ years earlier to win the IBF 140-pound championship was the crowning achievement of Hatton’s career, though. Hatton roughed up and out-worked the heavily favored Russian, and eventually made Tszyu quit on his stool following the 11th round at a sold-out Manchester Evening News Arena in Manchester, England, Hatton’s hometown.

A 26-year-old Hatton was unbeaten but unproven at the elite level when he encountered the respected Tszyu.

“The tactics? Make a fast start because he was the older man [35], and had been knocking people out so quickly,” Hatton recalled. “He hadn’t had plenty of rounds under his belt. I had to stay safe and not take chances. We got off to a good start. Kostya, after two rounds, knew he had to up the pace to stay with my work rate. He settled into a rhythm where he was putting rounds in the bank. I felt it was slipping away. Billy Graham [Hatton’s trainer] said, ‘Keep working and eventually he will break.’

“After nine rounds, Billy asked, ‘How does he feel?’ I said, ‘He feels weak as a kitten now.’ He said, ‘Then now is the time to jump on him!’ That’s what I did. It was hard. But I knew it was my chance. The game plan we’d worked on, I know I could be a few rounds behind, but when he dwindled, I had to put my foot on the gas and take advantage. I knew I might have to dig deep. Down the home [stretch], I recaptured the momentum and he quit on his stool. I can’t describe that feeling.”

Hatton went on to fight the two biggest stars of his era – Mayweather and Manny Pacquiao – but he lost both bouts by knockout. The Philippines’ Pacquiao knocked Hatton unconscious with a vicious left hand in the second round of their May 2009 fight at MGM Grand Garden Arena.

“I would have done better against Mayweather and Pacquiao if I hadn’t burned the candle at both ends,” Hatton said. “People said that one day my lifestyle would catch up to me. When it came to those fights, it caught up to me.”

[QUOTE=Monty Fisto;20597950]Hatton wasn't a real fighter? The mind boggles. As for 'if you think you could beat Floyd on a different night then why didn't you try again???' I think you'll find his comments were about the night he fought…

I see that floyd is still living in Ricky's head rent free, Hatton was a good old fashioned type fighter. Very 1 dimensional and only really affective when roughhousing and bumrushing opponents, more if a one trick pony. PAC and…

[QUOTE=LetOutTheCage;20596387]Nope he loses and deep down he knows it[/QUOTE]Thats what I think.A prime Hatton never beats a prime Mayweather.