Whereas Smith Jr. suffered a lopsided loss—and a broken jaw— at the hands of the Miami-based Cuban boxer, Hart made his splash in the light heavyweight division with a clear-cut points win over Barrera last June. By his own admission—to the point of insistence—it has nothing to do with how their own head on collision will play out this weekend.

“That’s the past. I’m coming in confident, but more so confident in my boxing ability,” Hart (26-2, 21KOs) said of his mindset heading into his clash with Smith Jr. (24-3, 20KOs), which airs live on ESPN from Hard Rock Hotel & Casino in Atlantic City, New Jersey. “I’m not [just] saying I’m gonna win this fight. I’m saying I have to hurt Joe Smith to the best of my abilities because he hurt me personally.” 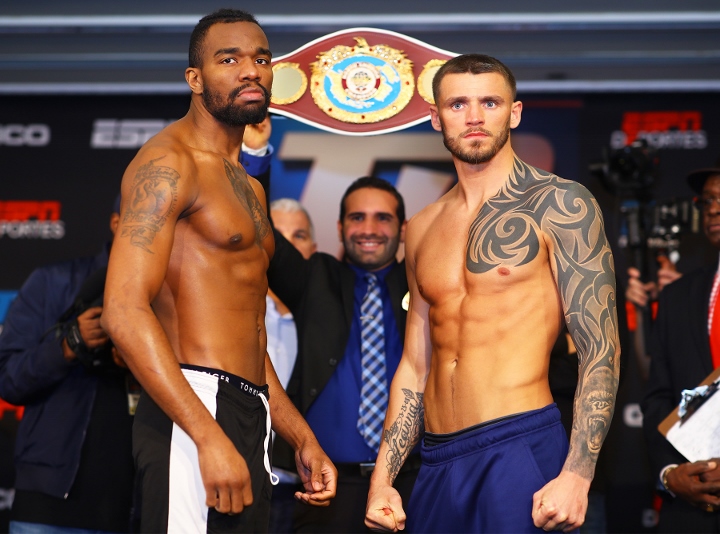 The personal side of it for Philadelphia’s Hart stems from his childhood idol and local hero, Hall of Fame former two-division champion Bernard Hopkins suffer a career-ending knockout loss to Smith Jr. more than three years ago. The bout served as the driving force behind this fight being made, with Hart sacrificing a lofty sanctioning body ranking for no other reason than to exact revenge on behalf of his fighting-proud city.

At no point were his two superior performances over Barrera and Tyrell Hendrix—scoring a 1st round knockout against a 10-2-2 version in 2013 who went on to get stopped in three rounds by Smith seven months later—factored into his desire to get the Long Island native in the ring. Much has been made about Smith enjoying success against a proven contender like Barrera, while Smith struggled against Barerra and in general since his breakout 2016 campaign.

“It’s not about who won (versus common opponents). I might not fight the way I fought Sullivan Barrera,” points out Hart. “Who knows? I might step to Joe. We both got power. That’s what I want to do. I don’t know how nobody else thinks about this, but this fight.. if you listen to Todd duBoef about how this fight got made, Jesse asked for Joe Smith. This wasn’t about rankings, this wasn’t about politics. This wasn’t about, oh I gotta take a step further to get in line for a title shot. This was strictly my mentality. I want to fight Joe Smith. Let’s go. This is a fight, it’s not a boxing match.

If Smith throws a short sharp straight right and lands solid on Hart's jaw... I'm thinking it's over. I just don't have much confidence that Hart can withstand that level of power. Joe does have trouble sometimes hitting his target,…

Come on kid, with your chin if you step to Joe Smith Jr you're getting knocked out. You know you're going to try to box him and s*** out a decision win in a geographical area that favors you over…

Yeah I don't buy it. Just trying to hype the fight like the whole manufactured drama around Bhop. What was Joe supposed to do not punch him so hard cause he was an old man? It was a boxing contest,…

You aint stepping to smith, he gonna KO your ass in the quickness!