ONTARIO, California – Tony Harrison and Jermell Charlo were well behaved at their weigh-in Friday for their rematch.

Harrison taunted Charlo on stage while holding the WBC super welterweight championship belt he took from Charlo last December. Other than that, Charlo and Harrison didn’t do anything out of the ordinary after making weight for the grudge rematch FOX will televise Saturday night from Toyota Arena.

The final time they came face to face before boxing again was nothing like all the emotional moments they’ve shared while promoting their rematch. 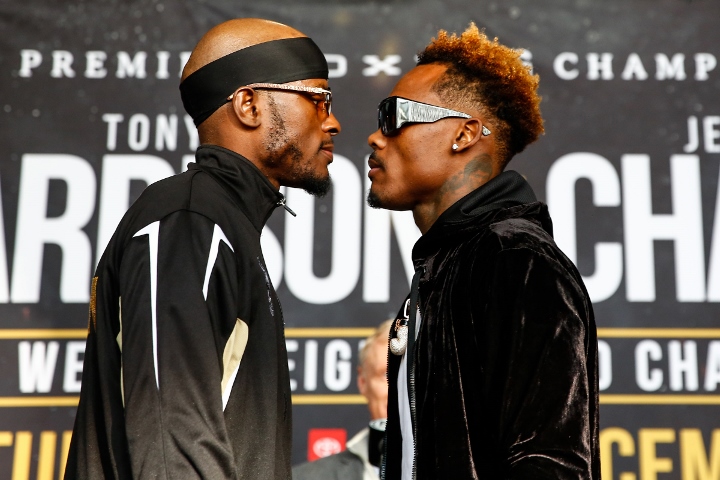 Charlo, 29, is consistently listed as a 3-1 favorite to beat Harrison in their second fight and avenge his only professional defeat. Harrison, also 29, was about an 8-1 underdog when he upset Charlo by unanimous decision in their 12-round championship match last December 22 at Barclays Center in Brooklyn.

Harrison and Charlo first were scheduled to fight again June 23 in Las Vegas. Harrison withdrew from that fight due to an ankle injury, which caused nearly a six-month postponement.

Charlo knocked out Mexico’s Jorge Cota, who replaced Harrison on about three weeks’ notice, in the third round June 23 at Mandalay Bay Events Center.

Harrison will end a one-year layoff, the longest of his career, when he makes the first defense of his WBC 154-pound championship against Charlo.

Just before Charlo and Harrison made weight, Nigerian heavyweight prospect Efe Ajagba officially weighed 237½ pounds for his 10-round heavyweight fight against Georgia’s Iago Kiladze, who weighed 230¼ pounds. Ajagba (11-0, 9 KOs), a 2016 Olympian, and Kiladze (26-4-1, 18 KOs) will meet in the second of three fights FOX will televise.

Karlos Balderas and Rene Giron made weight for their eight-round lightweight fight before Ajagba and Kiladze stepped on the scale.

The bout between Balderas and Giron will start FOX’s tripleheader at 8 p.m. ET/5 p.m. PT.

Why they are not commenting in one of the best fight of this weekend. :boxing: