BoxingScene.com has learned that former featherweight titlist Heather Hardy tested positive for the banned substance Lasix through random drug testing surrounding her title-losing effort to record-breaking seven-division titlist Amanda Serrano. Results of the test were not known at the time of their featherweight title fight, which took place Sept. 13 at Madison Square Garden’s Hulu Theater in New York City, mere miles from the Brooklyn homes of both boxers.

The fight marked the first time that both combatants in a female boxing event were subject to random drug testing through the World Boxing Council (WBC) Clean Boxing Program (CBP), with their pre-fight test conducted by Voluntary Anti-Doping Agency (VADA). Ironically, Hardy has long served as an advocate for more stringent testing, which was nonexistent for female fighters prior to 2019 when the WBC extended its program to all boxers, regardless of gender.

Serrano (37-1-1, 27KOs) produced clean test results throughout the event, which resulted in her entering her second tour as a featherweight titlist.

As much could not be said for Hardy (22-1, 4KOs), although she didn’t at all shy away from the finding even before it was made public.

“My VADA test results just came back, negative for Performance Enhancing Drugs, but detected a prescription drug used to treat kidney and heart problems,” Hardy noted through her verified social media account on Thursday. “I told the testing & [medical] professionals what I took heading into the fight, a prescription [medication] for period symptoms.

“They acknowledge this, and my now team is getting to the bottom of the findings.”

Lasix—also known as furosemide—is a common diuretic which is on the banned substance list for both VADA and World Anti-Doping Agency (WADA), the latter whose guidelines are adhered to worldwide. VADA’s specific list of outlawed substances and far stricter than any other testing protocol, for the simple fact that the Las Vegas-headquartered company considers all listed items to be prohibited at all times, unlike WADA who permits certain products when used for period deemed ‘out of competition.’ 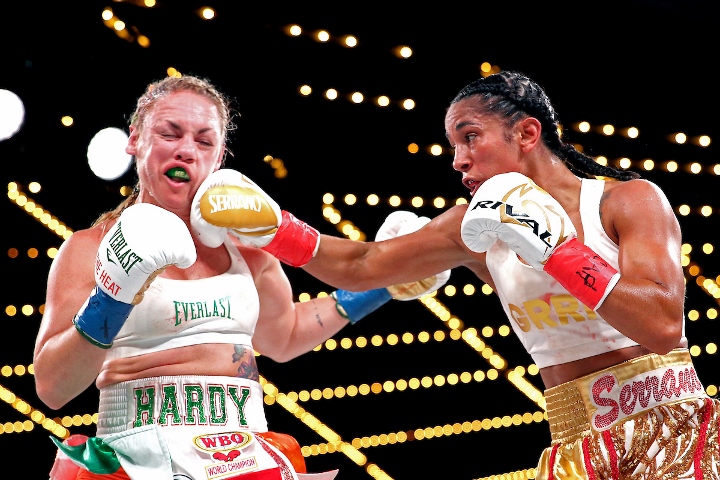 Diuretics and masking agents do not fall under the category, however.

Where Hardy might be without a proper alibi is VADA’s strict policy of an athlete being responsible for whatever product enters their body.

A statement on the company’s website outlines its stance on the usage of any dietary supplements, even if such products are disclosed in advance.

“Although VADA may, in its discretion, review a list of supplements provided by a participating Athlete for “red flag” substances, VADA does not and cannot endorse or approve the use of any supplements, regardless of the fact that an Athlete may have disclosed use of the supplement to VADA. In other words, a doping violation will have occurred even if the relevant prohibited substance can be traced to a supplement product that was disclosed to VADA by the Athlete.

“Athletes can help protect themselves by avoiding any supplement products altogether, especially those that have not been tested and certified drug-free by a qualified outside organization.”

The only allowed exception is for an athlete to apply and be granted approval for a Therapuetic Use Exemption, which was not the case here.

Either way, the loss will remain on Hardy’s record, her first as a professional boxer. The bout was marked her first attempted defense of the featherweight title she claimed in a 10-round decision over Shelly Vincent in their rematch at this very venue last October.

Serrano’s win entered her second tour as a featherweight titlist, having claimed belts in a record seven weight divisions. The Puerto Rico-born, Brooklyn-bred southpaw fought at the two extremes of her weight jumps in her previous two outings, moving up to 140 pounds to win a title last September before dropping all the way down to super flyweight, where she added to her own record following a 35-second knockout of Eva Voraberger this past January also at Hulu Theater.

Through her glory—having captured more major titles than any other female boxer or Puerto Rican athlete—regardless of gender—have come questions of whether her record setting run was through clean and fit training. Her team was more than willing to put those rumors to rest ahead of her all-Brooklyn clash with Hardy, with both willfully entering the Clean Boxing Program—despite a WBC title not initially being at stake when the fight was first signed (its interim featherweight title added late in the promotion)—and submitting to full VADA testing.

“I see Heather’s excuse for testing (positive),” Jordan Maldonado, Serrano’s longtime trainer and manager told BoxingScene.com, as they also plan to further look into the matter from a safety perspective, given Hardy's claim of making testers aware of the product she took in advance of the fight. “All I know is, if this was Amanda, she would be vilified by the media and every single win she ever had called into question.”

Next up for Serrano is an expected superfight with Ireland’s Katie Taylor, a two-time Olympian and 2012 Olympic Gold medalist who has since claimed the undisputed lightweight championship. By far the biggest boxing star to come out of Ireland in the 21st Century, Taylor will first attempt to become a two-division titlist as she faces super lightweight titlist Christina Linardatou on Nov. 2 in Manchester, England.

Serrano will likely enter a mixed martial arts bout to remain active ahead of their pending superfight, which is targeted for the first quarter of 2020. Their bout will also come with full random drug testing, as Taylor is also enrolled in the Clean Boxing Program.

no wonder she survived round 1

[QUOTE=MrFynest;20099971]Another reason it's banned is because diuretics supposedly helps mask PED's[/QUOTE] Only Oral PEDs which are excreted in the Urine, helps you flush them out faster so if you're microdosing Orals and take a Diuretic it's almost impossible to detect.…