Amanda Serrano is by far the best opponent Heather Hardy has ever faced in the ring (or the octagon) but she’s already won the biggest fight of her career just by arriving on this stage.

The unbeaten featherweight titlist has long been the voice for equality in sports—boxing, in particular—and an outspoken critic of the level of disrespect historically shown towards female boxers. All eyes will be on her first title defense, an all-Brooklyn showdown versus seven-division titlist and pound-for-pound entrant Amanda Serrano (36-1-1, 27KOs).

“I’m grateful, I’m really blessed to be here,” Hardy (22-0, 4KOs) humbly stated of her return to the ring and to the venue where she claimed her first major title. 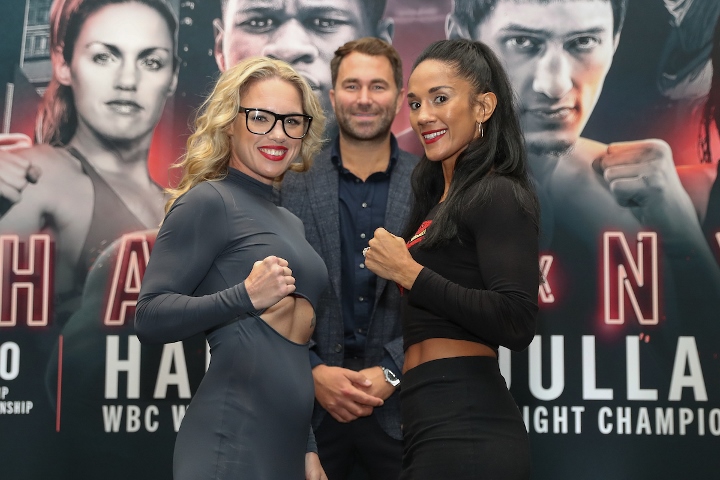 Since debuting in the U.S. market last fall, DAZN-streamed cards have featured at least one female bout on nearly every card. It’s come at a time when other stateside platforms have all but abandoned that side of the sport beyond singular boxer showcases—Showtime deeply invested in two-time Olympic Gold medalist and two-division champ Claressa Shields, ESPN with 2016 Olympian and unbeaten contender Mikaela Mayer—but getting to this stage is not anywhere close to the end game.

“This is a terrific women’s fight. This is as good as it gets,” notes Lou DiBella, who promotes both Hardy and Serrano and has for years fought with network executives over doing more for female boxers. “They are the two best female fighters in New York and they’ve been carrying the torch for years in this city.

Hardy did just that ahead of her title-winning effort last October. The 37-year old Brooklynite fought just as hard to appear live on HBO as she did in her repeat win over Shelly Vincent to claim a featherweight belt.

The bout was among the last ever cards to appear on the network’s long-running boxing series before bowing out of the game by year’s end. Upon learning that her bout wasn’t going to make the televised cut, Hardy personally plead with Peter Nelson, executive vice president of HBO Sports for her bout to air live on the premium cable outlet.

Her wish was granted, though with a paltry $10,000 payday along with a percentage of all tickets she personally sold. Hardy will receive a similar supplemental package for Friday’s fight, though this time with a career-best payday. It’s still not close to what a male boxer would make for a title defense versus a pound-for-pound entrant, nor is Serrano–who has won titles in seven weight divisions, the most ever by a female boxer or by any Puerto Rican prizefighter—but it’s a refreshing feeling to know her voice is finally heard.

“I’ve really become known as the voice for (equality) in women’s boxing,” notes Hardy. “But it was never a reflection of how grateful I’ve always been. Just looking at fight posters with my picture on it, I looked at my mom like ‘We did it. We’re here!’

“I’m ready for Friday night. I know how good Amanda Serrano is… but I’m the toughest girl that I know.”

Can't wait. I admire both of these women's courage & perseverance. I always say that being a female boxer is a thankless job that they legitimately have to love to partake in.