Friday’s DAZN-headlining landslide win over Russia’s Zaur Abdullaev (11-1, 7KOs) at Madison Square Garden’s Hulu Theater in New York City netted the Las Vegas-based boxer the interim World Boxing Council (WBC) lightweight title. The idea is to parlay the strap into a shot at the full version of the title, which is one of three belts currently in the possession of Vasiliy Lomachenko (14-1, 10KOs).

“I’d love to offer enough money to convince Lomachenko to take that fight next,” promoter Eddie Hearn. “Honestly, he should be making three times what he’s currently being paid. But the reality is, he fights on (ESPN’s platform) so it’s not a fight we can just (demand) on our own terms.” 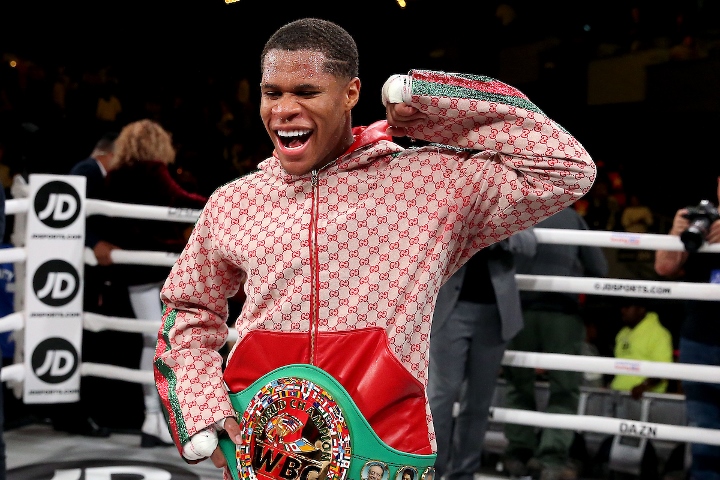 Lomachenko added the vacant WBC belt to his collection with a 12-round win over England’s Luke Campbell (20-3, 16KOs) in a pairing of 2012 Olympic Gold medalists last month on the road in London. The WBC has yet to commit to naming Haney as his mandatory challenger, nor would it result in an immediate showdown as Lomachenko is eyeing a crack at the winner of the Dec. 14 clash between reigning International Boxing Federation (IBF) titlist Richard Commey and unbeaten challenger Teofimo Lopez.  That will already put him out until next spring, with a showdown versus Haney no earlier than the second quarter of 2020.

“I don’t get it with these top guys,” Haney told BoxingScene.com after Friday’s win. “I keep hearing from these other guys that I’m not ready, I’m too green. Well, if I’m too green why not just fight me right now? If that were me, and I had a chance to make good money to fight a green opponent, I’d grab that in a heartbeat.

“These top guys, they better fight me now, because I’m only going to get better.”

It's funny how they talk until they're offered a fight... Anyway, this kid should take notes from Tank: there's no reason for him to suffer (the potentially career-ending) ass whooping Lomachenko will whip out, before his career even gets off…

I think he should fight some more decent opp

The only reason I have heard about this guy is some fans say he can beat Lomachenko lol. Make the fight than.

[QUOTE=P4P Forever;20067565]What are you talking about??? Loma just fought a mando and Devin just won the intrem last week. Who says there not fighting? [/QUOTE] What Mando did Loma fight?