Both boxers made weight ahead of their interim lightweight title fight, which streams live on DAZN Friday evening from Madison Square Garden’s Hulu Theater in New York, NY. Las Vegas-based Haney (22-0, 14KOs) tipped the scales at 134.6 pounds, as did Russia’s Abdullaev (11-0, 7KOs) for his United States debut.

The winner of Friday’s main event will be named as the mandatory challenger to unified three-belt lightweight titlist Vasiliy Lomachenko. 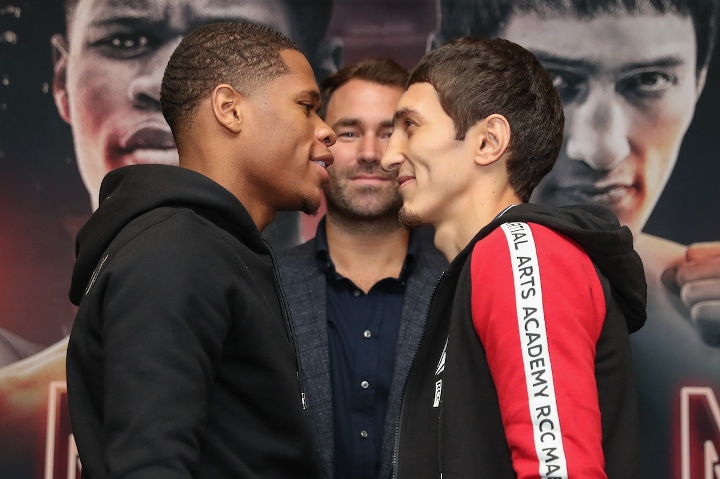 Haney turned heads with his DAZN and Matchroom Boxing USA debut, scoring a highlight reel knockout of Mexico's Antonio Moran this past May in Oxon Hill, Md.

Abdullaev arrived on the title stage courtesy of a decision win over veteran Hank Lundy last September. He's since added a 10th round knockout of Humberto Martinez in his most recent start this past March.

Heather Hardy and Amanda Serrano made weight for their all-Brooklyn featherweight battle, as both came in at an equally fighting fit 125.8 pounds.

The evening’s chief support features Hardy (22-0, 4KOs)—who hails from Gerritsen Beach and is a major draw in the New York area—in the first defense of the featherweight title she claimed in this very venue last October.

She comes in as a considerable underdog versus Serrano (36-1-1, 27KOs), who fights out of the Bushwick section of Brooklyn. The Puerto Rican southpaw has won titles in seven different weight divisions, more than any other female or Puerto Rican boxer (male or female) in history.

A win for Serrano on Friday will keep her in line for a contractually promised superfight with Ireland’s Katie Taylor, a two-time Olympian who claimed a Gold medal in 2012 and is now the unbeaten and undisputed lightweight champion.

Kuzmin was three pounds heavier than for his last fight, a hard fought 10-round decision over veteran gatekeeper Joey Dawejko.

Hunter—whose late father of the same name was a heavyweight contender in the 1980s and 1990s–weighed his heaviest since his first fight back at heavyweight last April following a cruiserweight which ended with a title fight loss to Oleksandr Usyk.

Murodjon Akhmadaliev (6-0, 5KOs) hoped to contend for his first major title (two titles, in fact), but saw that dream put on hold when unified titlist Daniel Roman suffered a shoulder injury and was forced to withdraw from the show. Uzbekistan’s Akhmadaliev remains on the show, as the 2016 Olympic Bronze medalist weighed for 123.5 pounds an eight-round super bantamweight contest versus Colombia’s Wilner Soto (22-6. 12KOs) who weighed 123.75 pounds for just his second career fight in the United States.

Kazakhstan's Daniyar Yeleussinov (7-0, 3KOs) weighed 147.5 pounds for his intriguing welterweight bout versus Killeen, Texas' Reshard Hicks (12-0-1, 6KOs) who weighed 147 pounds. Yeleussinov is a two-time Olympian who captured a Gold medal for Kazakhstan during the 2016 Rio Olympics.

By fight time he will be a Jr Middleweight easy.

Devin bout to whip this boy.