Hammer: Shields is Beatable, I Already Won The Mental Battle

The unifying world middleweight fight between two-time Olympic champion Claressa Shields and Christina Hammer will change the face of women's boxing, the German said in preparation of the biggest bout of her career.

The 28-year-old Hammer, a multiple world champion over two weight divisions, is undefeated in her ten-year pro career with 24 victories from 24 fights, but knows the bout against Shields is as big as they get.

The main event on Saturday night in Atlantic City's Boardwalk Hall with Showtime televising and a big crowd, the fight is billed as the biggest in the history of women's boxing and Shields is a worthy opponent. 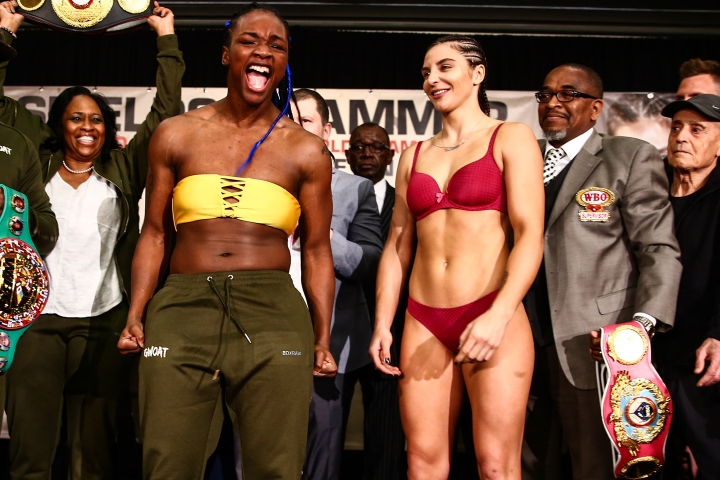 Unbeaten in her eight bouts and with two Olympic golds from London 2012 and the Rio 2016 Games under her belt, the aggressive 24-year-old Shields has three of the four belts and is seen as a slight favorite on home soil.

Hammer is very confident of victory.

"I've worked really hard for this. I've sacrificed everything for this fight and it's time to show who's the real champion and who Christina Hammer is. I feel like I'm the stronger one, mentally. I showed her at the stare down that I'm not scared. Every fight, there's a mental battle and I think I won the mental battle for this fight," Hammer said

"I have to stick to my game plan and not worry about hers. Shields is beatable. Hanna Gabriels showed that. I have to make her pay for every mistake. We've analyzed her a lot and I've known for a long time that I would one day fight her.

"I'm not scared of her one bit. Why would I be scared of her? I worked really hard for this opportunity and now it's the point where I have to show it. I have to focus in every single round. This will be a tough fight and I know my opponent also wants to win but on Saturday night, I will be the undisputed champion of the world.

"I hope that a lot of women will be inspired by this fight. I want women to know that if they work hard, they can make it to whatever level they aspire to be in whatever sport it is they do."

It's this fight tomorrow?

Hammer is a real butterface

This fight should be huge with thousands of sponsors flying to get their name in on this but this is modern boxing, considered the 10th or 12th watched sport in America! I think Shields wins in the toughest fight of…