Hammer: Fight With Shields Will Be Biggest Women's Fight Ever

Masonic Temple in Detroit, Michigan -  In a lopsided win in her highly anticipated U.S. debut, Christina Hammer (23-0, 10 KOs) remained undefeated with a unanimous decision against Tori Nelson (17-2-3, 2 KOs). The scores were 100-90, 99-91 twice, to retain her WBC and WBO Middleweight World Title belts.

“It would have been better to get a KO,” said Hammer, who is 27 years old and from Dortmund, Germany. “I tried everything I could to get the knockout. She was tough. I hope the USA is good with this and I’m still the champ.”

“I’m really looking forward to fighting Claressa. She will try and fight me on the inside but my footwork and my reach will make the difference. The fight with Claressa will be a game-changer. It will be the biggest women’s fight ever. I would like to fight her at a neutral site.”

“I’m very disappointed in my performance tonight,” said an emotional Nelson after the fight. “It’s a loss, of course it’s disappointing. I wasn’t busy enough, I guess.” 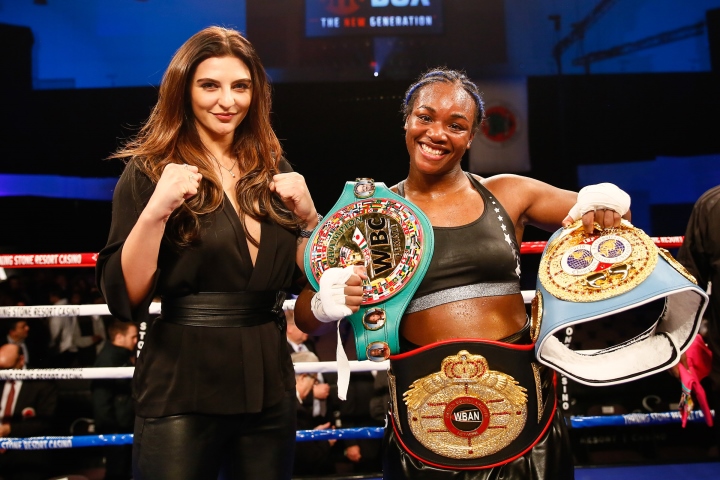 In her last fight, Nelson lost a unanimous decision to Shields back in January. “Claressa is better,” Nelson said. “Shields has a jab and uses the ring. Claressa stands there and wants to fight. She has all the punches. Hammer only has one.”

In the telecast opener, Umar Salamov (21-1, 16 KOs) connected on a lethal right hand in knocking out Brian Howard (13-2, 10 KOs) 53 seconds into the ninth round of a scheduled 10-round light heavyweight bout.

Salamov, from Alkhan-Kala, Russia, was making his United States debut and trains at the famed Kronk Gym in Detroit with Javan “Sugar” Hill Steward. In a fight between two long and lanky fighters, Salamov landed 34 percent of his power punches compared to 27 percent for Howard and was ahead on all three judges’ scorecard at the time of the knockout.

“I was hurt a little bit in the second round from one of his shots, but I didn’t let it bother me because this is my U.S. debut,” said Salamov, a six-year pro who is 24 years old. “I just kept fighting. After I got hit with that punch, I started coming forward and as soon as I did that, the fight changed.”

Salamov said he knew once he connected on the first right that Howard was hurt. “I knew as soon as I landed the punch that he would be very hurt,” he said. “I felt it up to my elbow. I didn’t want to hit him after that because I knew he was finished.”

The former cruiserweight Howard had a couple of highlights and was able to effectively land his right hand on several occasions, including one powerful right cross in the seventh round that seemed to stun Salamov.

“I would say I did fair, I did OK,” said Howard, a former minor league football player who lives outside of Atlanta and was making his SHOWTIME debut. “I was fortunate to get the call by Salamov’s team and by SHOWTIME. I’ll be back.”

[QUOTE=Queen_Leia;18889136][B]“Claressa is better,” Nelson said. “Shields has a jab and uses the ring. Claressa stands there and wants to fight. She has all the punches. Hammer only has one.”[/B] This is nonsense...Hammer gave Nelson a boxing lession, Shield did not.…

Hannah Gabriels gets the winner. What a fight her and Shields was. Shes kinda sexy when she gets goin too. I wanna see her against Hammer! Even if Shields wins its viable at some point. it has to happen!!

[B]“Claressa is better,” Nelson said. “Shields has a jab and uses the ring. Claressa stands there and wants to fight. She has all the punches. Hammer only has one.”[/B] This is nonsense...Hammer gave Nelson a boxing lession, Shield did not.…

Yea lala Ali and Ann Wolfe was pretty heavy. Filled up the gulf coast coliseum in Biloxi. Mr ALI walked in the arena and it was standing ovation for 20 min. TI, Rick Ross, Roy Jones and I think Roger…

Laila Ali vs. Christy Martin. I remember the ppv was $20 bucks. I watched this one with my dad. Ali was was bigger than Martin