The Croatian contender didn’t make any excuses for her lopsided loss, either. She just wasn’t impressed by Shields’ power.

“Well, she doesn’t have power,” Habazin said during a post-fight press conference. “She’s constantly [punching] and that’s actually why she’s winning. From all fighters [that] I fought, the biggest puncher of all of them was Cecilia Braekhus.” 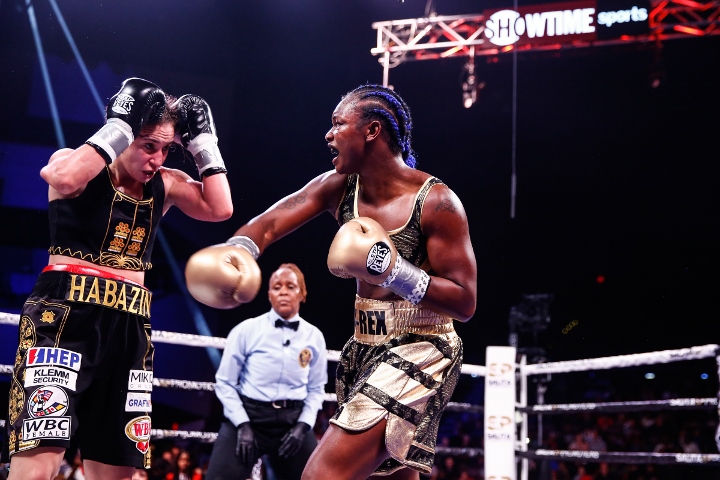 Braekhus beat Habazin rather easily, too, in their 10-round fight for the Colombian-born, Norwegian-bred champion’s IBF, WBA, WBC and WBO welterweight titles in September 2014. The 38-year-old, unbeaten Braekhus has just nine knockouts in 36 professional fights, only a slightly higher knockout ratio than Shields (10-0, 2 KOs).

Shields predicted she would knock out Habazin inside of six rounds when they fought for the vacant WBC and WBO 154-pound titles at Ocean Resort Casino’s Ovation Hall. It looked like Shields might deliver on that promise when she made Habazin take a knee after landing two body shots in the sixth round.

When Habazin got up, there still were 44 seconds to go in the sixth round, plenty of time for Shields to finish her. Shields tried to capitalize on that momentum, but Habazin survived and made it to the seventh round.

“I need to give her credit for a liver shot,” Habazin said. “I think that even she didn’t realize that she hit me. It was the first [body] shot, but I still keep moving. After [the] second shot, I knew that I needed to stop and take a break because maybe they will stop the fight and I didn’t want to quit. So, I tried my best, you know? It was like my brain want to do something, but my body didn’t. But there is no excuses.”

Shields couldn’t hurt her again in any of the final three rounds and Habazin (20-4, 7 KOs) made it to the final bell. It marked a sixth straight fight in which Shields has gone the 10-round distance.

The 24-year-old Shields has been criticized for not scoring more knockouts, but the Flint, Michigan, native did dominate Habazin.

[QUOTE=markther;20323015]That’s a great point. I was thinking the same thing.[/QUOTE] Maybe she has hollow bones? Usually a person with tree trunk legs has power, shields has none. Ive seen her really sit on her shots too so its not like…

[QUOTE=PredatorStyle;20323462]And you sound like someone who has never boxed a round in his life. It's mainly fatigue and oxygen debt that sets up a knock down like that. The fact she made it through the fight makes her comment justified.[/QUOTE]…

[QUOTE=Nusky;20322702]Women's boxing has potential but they need to make it 3min. rounds and 12rds for championship fights. You'll see More KO's and better fights overall if that were the case. Habazin, you and every other fighter in the history of…

[QUOTE=famicommander;20322365]She's comparing Shields to the likes of Ann Wolfe, Lucia Rijker, Anne Sophie Mathis, and Cecilia Braekhus because those are the ladies Shields has been claiming to be better than. Habazin has actually fought Braekhus so I believe her when…

[QUOTE=Boris Johnson!;20321909]no women fighters hit hard, the only power a woman has is in the bedroom[/QUOTE]