There was no news conference, no statement issued by promoter Top Rank and not so much as a tweet or Instagram post from the fighter. Instead, there were only brief comments from manager Egis Klimas earlier this month that former light heavyweight world champion Oleksandr Gvozdyk had retired from boxing.

At age 33 and having lost his world title by 10th-round knockout to Artur Beterbiev in a unification showdown in October at the Liacouras Center in Philadelphia, Gvozdyk has indeed decided to hang up his gloves.

“My mind is completely OK and I feel OK and I just right now feel it was the right time to make some changes,” Gvozdyk said in an interview with BoxingScene.com, his first since the retirement revelation.

The fight with two-time Russian Olympian Beterbiev was the first light heavyweight world title unification bout between undefeated titleholders and it was an action-packed scrap. It was also highly competitive until Beterbiev began to wear Gvozdyk down late in the fight, ultimately notching three knockdowns in the 10th round before the fight was waved off with Gvozdyk ahead 87-84 and 86-85 on two scorecards and Beterbiev leading 87-83 on the third.

After the fight, Gvozdyk, accompanied by trainer Teddy Atlas, walked out of the arena to a waiting ambulance to be taken to Temple University Hospital, where he underwent a battery of tests, was diagnosed with a concussion and spent two nights.

Gvozdyk (17-1, 14 KOs), a Ukraine native, who lives in Camarillo, California, said that the rough ending and subsequent hospital stay had nothing to do with his decision to retire.

“Going to the hospital was just a precaution because of those things that happened with fighters recently. A couple of guys died so that’s why (I went),” said Gvozdyk, referring to the fight-related deaths of Maxim Dadashev, with whom he shared Klimas as a manager, last July and Patrick Day just two days before Gvozdyk-Beterbiev.

“And you know Teddy” Gvozdyk continued. “He always wants to be sure in every situation and he forced me to go to the hospital. Not really forced me, but he told me I needed to go. Everything was good.” 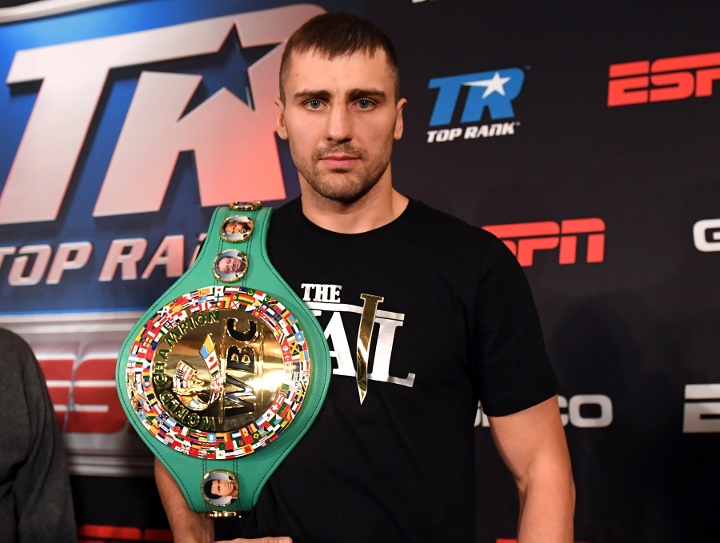 In fact, it was not that long ago that Gvozdyk said he was thinking about a return to the ring, where he hoped for a rematch with Beterbiev.

But the combination of the coronavirus pandemic shutting boxing down in mid-March and the fact that Beterbiev, whose next fight will be a mandatory defense against China’s Meng Fanlong, has shown no serious interest in a rematch led Gvozdyk to retire.

“With this situation with coronavirus I knew I’d have to almost start over with everything,” Gvozdyk said. “Nobody was going to give me a chance to fight for the title right away. This is first thing. And second one, for right now with all this uncertainty with coronavirus, I felt I am 33 years old, I am healthy and I want to be healthy. I’m looking for new opportunities in my life besides boxing. I am healthy and I feel stronger than anytime in my life. I’m glad to have my health.

“I always try to be sober. I understand for right now why is Beterbiev supposed to give me a rematch? There were no (rematch) clauses in the contract, so it’s up to him. But I agree he is not supposed to give me one. If I was him I probably wouldn’t as well. He is looking forward to unifying the titles and becoming undisputed champion. Why is he supposed to look back and fight me again? I realize he has no interest in making that happen. So, he is supposed to just to do it for me? No, we are not friends.”

But there was not a hint of bitterness in Gvozdyk’s voice. He gave Beterbiev ample credit for his victory.

“Somebody was prepared better. It was him. I was less prepared for this fight. Things happen, you know? Sh—happens,” ” Gvozdyk said with a laugh.

Had he wanted to continue boxing, Top Rank, which promoted Gvozdyk since his professional debut in 2014, would have certainly given him a slot on one of the ESPN-televised cards it is putting out without spectators twice a week at the MGM Grand in Las Vegas. But Gvozdyk said that the idea of fighting a lower-level bout just did not interest him. So he said he would look instead toward opportunities in the business world.

“Being in the sport for 22 years I established a lot of relationships with boxing people and business people as well,” Gvozdyk said. “I’m not going to give you any comments about what I’m going to do but believe me I’m good.”

Gvozdyk began boxing at age 10 and went on to claim a bronze medal in the 2012 Olympics for the vaunted Ukrainian national team that also included his close friends Vasiliy Lomachenko and Oleksandr Usyk, both of whom won gold medals and also have won professional world titles.

Gvozdyk was the last of the trio to win a world title, doing so in the first of his three fights with Atlas as his trainer. Gvozdyk traveled to the home turf of Adonis Stevenson in Quebec City in December 2018 and won the WBC and lineal titles by punishing 11th-round knockout that ended his career and sent Stevenson to the hospital in a coma, which he survived.

“I always said give me the best (opponents),” said Gvozdyk, who made one successful defense by fifth-round stoppage of Doudou Ngumbu in March 2019. “In real life in their minds a lot of fighters say that but they don’t do it. They see those (top) guys in their nightmares. Most guys say give me this, give me that and then eventually when it’s time to take action they say, ‘No, oh, something happened.’

“I wanted to be champion and I meant it when I said I wanted to fight the best and I am responsible for my words, so, of course, I realized all the risks, risks which I have to take and I did it. Unfortunately, it didn’t work out. OK. So, I will look for something else.”

The championship victory over Stevenson, who was one of his boxing’s most feared punchers, will go down as his career highlight.

“I became a world champion and I put my name in little letters in boxing history,” Gvozdyk said. “That’s what it means to me.”

He also said he was happy to have been able to convince Atlas to return to training to take him on for his title shot.

“Teddy is part of my team. Teddy is my friend and I’m glad he supports me (in the decision to retire),” Gvozdyk said. “I am glad that I have a relationship with Teddy even after I finished my career.”

But would Gvozdyk entertain the possibility of a ring return?

Then Gvozdyk added, with a laugh, “I’m open to negotiations. I would consider it but it’s not what I’m looking for.”