Ward stated that his team contacted Golovkin for a super middleweight showdown and GGG's promoter, Tom Loeffler of K2 Promotions, requested a catch-weight of 164-pounds. Ward says a second approach was turned down very quickly.

Due to his inability to make any progress with Golovkin, Ward made a decision to move up in weight and is now a leading contender at light heavyweight - with a planned fight against world champion Sergey Kovalev in November. 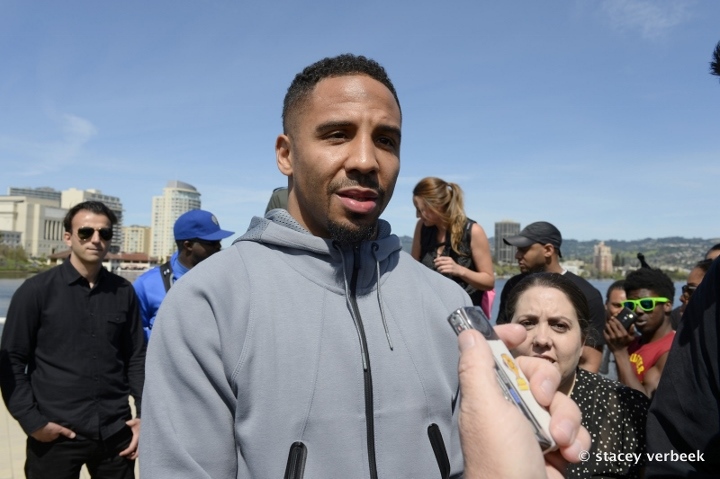 Sanchez claims there was never a request for a weight of 164 - because the two sides had never negotiated any terms or entered negotiations at any point time. He also claims Ward was requesting a handful of tuneup fights.

"Words have been spoken [back and forth]. Words have been said, but people have to remember that it takes a willing participant to negotiate for a fight. When they say we turned them down or asked him to come down to 164, well that's not true. That's not true. That's something that Dan Rafael wrote.. something about a 50-50 thing with the money and the weight and everything, and we never asked for 164. The fight has never been negotiated," Sanchez told Hustle Boss' Chris Robinson.

"And Andre claims that a proposal was sent to Tom. And that's true. It was sent, it was sent about 15 or 20 minutes after we agreed to the Lemieux fight.  And it also said that it wasn't going to be a fight in 2016, it was going to be 2017 because he needed a couple of tune-up fights. It's impossible for us to keep a man who's 33-years-old, like Gennady, on the shelf waiting for Andre Ward to be ready. But I would love to see a fight like that. It may still happen, who knows."

Ward never fancied it. He'd have been jabbed to death and his clinching wouldn't have worked

[QUOTE=Kali_KO;19170035]Ward couldn’t even make 168 at that time, he was fighting at 172, that’s why he went to 175 and now is talking about fighting Cruiserweight, crazy to think GGG would have changed his whole schedule around to fight a…

[QUOTE=Kali_KO;19170035]Ward couldn’t even make 168 at that time, he was fighting at 172, that’s why he went to 175 and now is talking about fighting Cruiserweight, crazy to think GGG would have changed his whole schedule around to fight a…

Ward couldn’t even make 168 at that time, he was fighting at 172, that’s why he went to 175 and now is talking about fighting Cruiserweight, crazy to think GGG would have changed his whole schedule around to fight a…

In theory, why would Abel acknowledge not "waiting" for Ward when Gennady was always fighting and expected to fight for HBO dates? What would Ward's schedule have to do with GGG's schedule if after some fights both would meet?

ADD COMMENT VIEW COMMENTS (91)
Advertisement
Top Headlines Liam Smith: Brook's Not Ducking Me, But He's Scared Of Losing To Me McCracken Does Not Expect British Boxers To Turn Backs on Olympics Jack Rafferty Inks Agreement With MTK Global Fenech Explains Why He Left Mike Tyson Over Face Tattoo Eubank Jr. Warns: I Know I Can Beat Golovkin - I'd Take Him Out! Michael McKinson Motivated To Keep Proving Doubters Wrong Goossen, Bernstein, Weeks Reflect On Epic Corrales-Castillo Fight Showtime Will Replay Canelo's Coach Explains Why They Don't Want Munguia Fight Fury-Wilder Location Could Depend on Which Area Recovers Quicker Ngannou Believes He Can Match Up With Fury, Joshua, Wilder Floyd Mayweather Finalizes Deal To Manage His Digital Likeness UFC 249 a No-Go, ESPN & Disney Make Dana White Stand Down Mike Tyson: Boxers Will Always Make More Money Than MMA Fighters Fortuna's Promoter Wants Luke Campbell First, Then Devin Haney Kerman Lejarraga Accepts The Challenge of Sergio Martinez Hearn: Joshua Would Embrace Underdog Role in Fury Fight Derrick Jefferson Transferred Out Of ICU, Continues To Recover From COVID-19 Top Rank Prez: Crawford Wants Spence or Pacquiao, Brook is Option Liam Smith Reflects on Street Fighting Days, Rivalries With Brothers Jose Ramirez: I'm Going To Stay Active In A Very Precautioned Way James: Spence Made Bigger Statement Beating Porter, Garcia At What They Do Best Adrien Broner Ready To Focus 120% On Boxing; People Bank On Me To F--k Around Andrade: Liam Williams Is Not Gonna Be The One To Stop This Train Fernando Vargas Compares His Generation To Current Era Benavidez vs. Angulo: Sampson Secures License in Arizona Canelo's Coach: We Want GGG at 160 - But We'll Make A lot of Noise at 168! Jarrell Miller: A Fight Against Tyson Fury is Inevitable WBA Prez Discusses The State of Boxing During The Pandemic Boxing Will Be Back, But How Much Will It Cost? Canelo's Trainer: I Promise, Golovkin is Getting Knocked Out! Frampton vs. Herring To Land in Late Summer or Early Fall Warren: Tyson Fury Glove Allegations Are Pathetic, It's Stupid! Stevenson: I'm Moving Up To 130 For Sure, Unless It's Warrington Next Carlos Cuadras Eager For Revenge Against Juan Francisco Estrada Sergio Martinez Wants Kerman Lejarraga as Comeback Opponent Devin Haney Reinstated As WBC Lightweight Champion Fury: Coronavirus Can Take Anyone Out, Regardless of How Invincible We Feel Hearn: Joshua Has To Box By Mid-August To Fight Twice in 2020 Mares: I Still Want To Perform At The Highest Level Like I Always Have Parker's Manager: Junior Fa's Demands Were Stratospheric
Advertisement
Latest Boxing Videos Charles Martin Reacts To Helenius Stopping Kownacki Robert Helenius Reacts To Shocking TKO of Kownacki Adam Kownacki Reacts To TKO Defeat To Helenius Joseph Parker Reflects on Fury-Wilder, Talks Return Mikey Garcia Reflects on Fury-Wilder, Talks Vargas Eddie Hearn Reflects on Fury Stopping Wilder, More Kenny Porter Reacts To Tyson Fury Stopping Wilder Jose Ramirez Reacts To Tyson Fury Stopping Wilder Caleb Plant Reacts To Tyson Fury Stopping Wilder Michael Hunter Reacts To Tyson Fury Stopping Wilder
Recent Top Stories Boxing Will Be Back, But How Much Will It Cost? Aaron Aponte: Tremendous Feeling To Know My Life is Gonna Change Real Soon A Golden Boy Looks at 60: Lalonde Reflects on 'Sugar' Highs and Money Lows Sugar Ray Leonard vs. Marvin Hagler - Boxing Classic Turns 33
Advertisement
Latest Forum Threads
Advertisement
Advertisement
This website may contain adult language.
TM & © 2020 BoxingScene. All Rights Reserved.