IBF, IBO, WBA, WBC middleweight champion Gennady "GGG" Golovkin won the fight with his jab, landing an average of 9 out of 30 per round. Jacobs had a 144-126 edge in power shots landed. 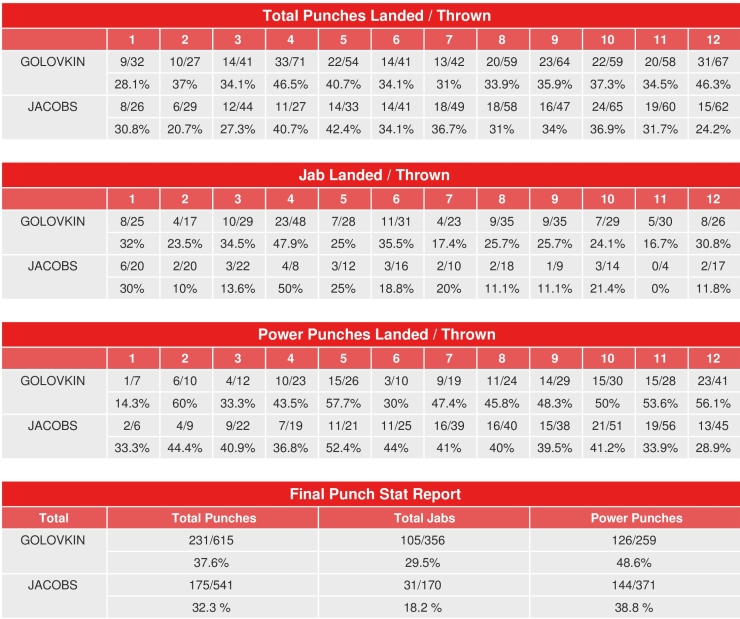 Gennady Golovkin is still unbeaten as he defended his middleweight titles in a unanimous points decision against Daniel Jacobs after 12 rounds.

Golovkin was pushed the distance for the first time since 2008 but the Kazakh boxer was too good at Madison Square Garden on Saturday as he improved to a flawless 37-0 (33 KOs) record.

Golovkin's WBA super, WBC, IBO and IBF belts were up for grabs in New York, though American Jacobs (32-2) was ineligible to win the IBF title after skipping a weight check in the morning of the bout.

And it was a very cautious opening to the main event in the Big Apple, with both fighters wary of each other's power.

Golovkin was the aggressor for the majority of the contest as Jacobs looked happy to bide his time and work his opponent, until he was floored in the fourth round.

A pair of right hands knocked down Jacobs early in the round but the cancer survivor was strong defensively as he held off Golovkin.

As the fight wore on, Jacobs grew in confidence, turning to the crowd with his arms pumped as tempers threatened to boil over in the seventh round.

The pair continued to go toe-to-head in an even fight approaching the 12th and final round, where Golovkin was not to be denied as a blockbuster showdown with Saul 'Canelo' Alvarez looms large.

Close call against a guy many consider a bum.

Kudos to jacobs for the fight. He has done enough to win it no matter what the judges are saying. But I'm still a GGG fan.