Gennady Golovkin is setting out to regain a title he held for over half a decade as it has been revealed that the Kazak's showdown with Ukranian standout Sergiy Dereyvanchenko will also be for the IBO world middleweight title. The vacant IBF title is also at stake.

Golovkin first picked up the IBO version of the world title back in 2011 with a brutal first-round knockout of Lajuan Simon in Dusseldorf, Germany. In under 12 months 'GGG' had really landed on the world scene, as he put on a clinic against Grzegorz Proksa on his US Debut at the Turning Stone Resort in upstate New York before proceeding to have a blood bath against Gabriel Rosado, a fight that's iconic images still live fresh in the mind of boxing fans throughout the globe.

International Boxing Organization President Ed Levine has always been a big advocate of discovering talent and giving them the opportunities to box for world titles. Golovkin is one of those and arguably the most notable fighter in recent times to emerge with the IBO title around his waist. Levine opened up about his relationship with Golovkin and his team throughout the years. 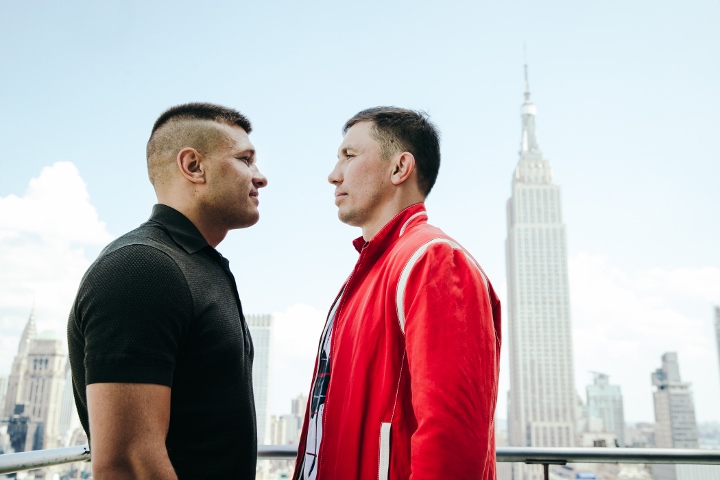 The Florida based figurehead stated, "Gennady and his team have been fantastic to work with over the years. They are some of the most open and honest people I have ever worked with in boxing and that is what the IBO stands for as an organization. So working with the likes of Gennady and his team has always been a pleasure.

"Gennady has represented the IBO in a fantastic way. He is an honorable and fighting champion. That is what being world champion is about and that is what the IBO as an organization wants as its champion. Gennady is an absolute credit to the sport of boxing."

Standing in the way of Gennady Golovkin on October 5 at Madison Square Garden is the excellent Ukranian Sergiy Dereyvanchenko, whom many consider an undefeated fighter, having only lost an extremely controversial decision to Daniel Jacobs at the latter end of 2018. IBO President Levine opened up on the massive clash that will be broadcast in the US on the DAZN platform and promoted by GGG Promotions in conjunction with world boxing juggernaut Matchroom Sport.

Levine said, "It's a massive event and a massive fight that I am glad the IBO is an integral part of. This fight is a fantastic fight. Dereyvanchenko is a top-quality operator who I believe will eventually become a world champion. This fight on October 5 is a difficult fight for Gennady. We are going to get a fantastic fight at the Mecca of Boxing Madison Square Garden and it will be a fight that will be remembered for years to come."

[QUOTE=BoloShot;20084531]Don't think the strawweight belt is actually vacant. Koncko is unifying it with the WBC holder 53-0 GOAT Moonsri.[/QUOTE] I don't think Moonsri wanted to pay the sanctioning fee for a unification so the IBO was vacated. It is listed…

[QUOTE=Willy Wanker;20084541]We need to unify bro. Your belt and my orange belt I got in karate class when I was 11. Let's break down this wall baby![/QUOTE] Come on dude, my belt's from J Crew: everyone knows stripmall champions and…

With this on the line, i cant miss it. The IBO just got me to really want to watch this fight

[QUOTE=paulf;20082826]They can fight for my belt while they're at it. $20 sanctioning fee, and it's reversible: brown on one side, black on the other; goes with any outfit. Way more valuable than the IBO belt, trust me.[/QUOTE] We need to…