Golovkin vs. Derevyanchenko Deal: The Finish Line Well in Sight

Talks continue to linger for a vacant middleweight title fight between Sergiy Derevyanchenko and Gennadiy ‘GGG’ Golovkin, though with the finish line well in sight.

While the timeline continues to shift, sources from both camps have informed BoxingScene.com to expect all terms finalized in time to formally announce the event later this week in New York City.

The planned date for the event remains Oct. 5, live on DAZN from Madison Square Garden in New York City, one of the few remaining Saturdays still available at the famed venue. 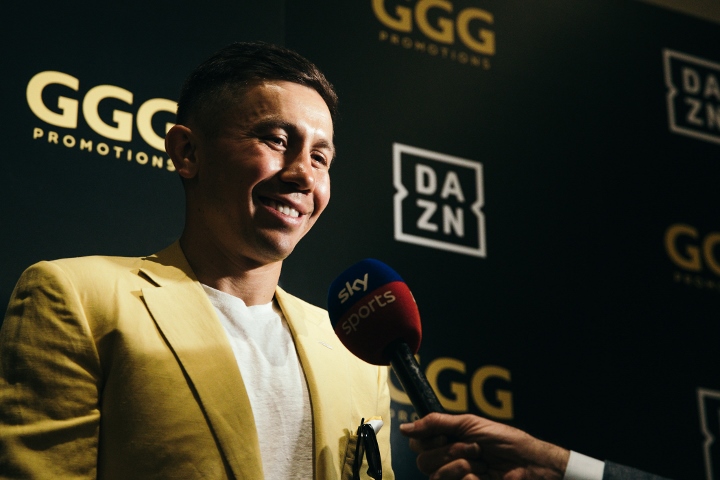 Negotiations for the bout were first ordered on Aug. 5 by the International Boxing Federation (IBF), whose 160-pound title became available after Saul ‘Canelo’ Alvarez missed several deadlines in securing a mandatory title defense versus Derevyanchenko.

Golovkin (39-1-1, 35KOs) was the next-highest rated challenger in line, not wasting any time in accepting the IBF’s offer to fight for the vacant title or in reaching out to Derevyanchenko, a 2008 Olympian for Ukraine who now lives in Brooklyn, New York.

The two were already in advanced talks by the time the IBF ordered the fight, with little concern that the matter would make its way to a purse bid hearing that would take place in the first week of September.

It’s highly unlikely to reach that point, as multiple sources with knowledge of such talks assure BoxingScene.com that any remaining disputes are minor details that figure to be resolved within the next 48 hours.

One new wrinkle is the potential emergence of a new promoter. Eddie Hearn, whose Matchroom Boxing USA outfit is the primary boxing content provider for DAZN-USA, will be reportedly working with Golovkin moving forward, beginning with this proposed bout. News of the business development was first publicly mentioned The Athletic boxing insider Mike Coppinger. Representatives with DAZN and Matchroom Boxing USA declined comment to BoxingScene.com, while efforts to reach Golovkin and his team went unreturned as this goes to publish.

Hearn’s involvement hasn’t at all factored into current negotiations, but—according to sources—moreso provide assurance of a far bigger event than was the case with Golovkin’s DAZN debut in June. The former unified middleweight titlist fought for the first time since a disputed loss to Saul ‘Canelo’ Alvarez in their rematch last September, returning to the ring and the win column with a 4th round knockout of Canada’s Steve Rolls.

The June 8 card also took place at MSG, one week after the NYC locale played host to the biggest heavyweight title fight upset of the 21st century, when Andy Ruiz scored a 7th round stoppage of previously unbeaten and unified titlist Anthony Joshua. The June 1 card played to a reportedly sold-out venue, the night ending with Ruiz becoming the first-ever Mexican boxer to win a portion of the heavyweight crown.

By comparison, Golovkin’s Garden party was a dreadfully dull affair. The knockout artist from Kazakhstan has chosen to take full control of his own career, which included his controlling the event and the undercard, save for the limited slots afforded to Rolls’ promoter, Lou DiBella who also guides the career of Derevyachenko (13-1, 10KOs).

Bringing in a high-profile promoter with as deep of a roster as Hearn would go a long way towards avoiding that type of history repeating itself.

For now, the most important step is finalizing terms for the title fight itself, although current progress comes in stark contrast to the last time they were mandated to face one another.

Golovkin was still an unbeaten, unified titlist when the IBF ordered him to defend versus then-mandatory challenger Derevyanchenko last spring. The pairing surfaced after Golovkin was out an opponent for a May 2018 date due to Alvarez twice testing positive for banned substance Clenbuterol ahead of their eventually postponed rematch.

Given the short notice to secure an opponent, Golovkin petitioned the IBF for a voluntary defense versus Vanes Martirosyan. The mismatch was granted on the condition he next honor his mandatory.

Golovkin blew out Martirosyan in two rounds but wound up relinquishing the IBF title to instead pursue a far more lucrative option in his rescheduled rematch with Alvarez last September. The career-high payday came at a price beyond his bank account, losing a majority decision along with his unbeaten record and remaining titles 12 months after the two fought to a hotly disputed 12-round draw.

Derevyanchenko fought for the vacant IBF title, dropping a competitive 12-round decision to longtime stablemate Daniel Jacobs last October. Jacobs in turn lost the belt to Alvarez in their unification bout this past May, by which point Derevyancheko resurfaced as a mandatory challenger following a 12-round win over Germany’s Jack Culcay in their title eliminator this past April.

Once a deal is reached, Golovkin will enter his first title fight since his aforementioned loss to Alvarez which ended his record-tying title reign of 20 defenses dating back to 2010. The event will also mark his ninth career appearance at a venue owned by Madison Square Garden, Inc., including his fifth in MSG’s main room. He has also appeared twice each at MSG Theatre (now Hulu Theatre) and MGS-owned The Forum in Inglewood, Calif.

[QUOTE=Shadoww702;20002319]I expect a great fight as well. Fun Fact Those two were born only 2400 miles from each other. Almost like NY to Vegas 5 hour straight flight. Insane how they’re came clear across the world and fighting in the…

[QUOTE=Boxing Scene;19999980]He shot called his way right out of his belt. So much for unifying the division because Assnelo is too greedy to pay someone.[/QUOTE]He doesn't need any belts! He's the face of DAZN! Even GBP is nervous!

[QUOTE=Dasmius Shinobi;20001477]I still don't rule out a possible upset via tight decision, Derevyanchenko is a very tricky opponent who is going to fight back. I expecty a great fight.[/QUOTE] I expect a great fight as well. Fun Fact Those two…

[QUOTE=Shadoww702;20001422]Sht site with ZERO credibility? What are you gonna do??? Don't take it personal my friend.[/QUOTE] I am not bothered by it. Some of the folks who post on this site are smart and really know the fight game. Unfortunately,…