Golovkin Goes Through Hell To Decision Derevyanchenko in War

The Ukrainian underdog went toe-to-toe with Gennadiy Golovkin for 12 unforgettable rounds, but he still lost a unanimous decision in their middleweight title fight at Madison Square Garden. All three judges scored their fight for Golovkin, who regained the IBF and IBO middleweight titles by winning a memorable brawl that warrants an immediate rematch.

Judges Frank Lombardi and Eric Molinski each scored seven rounds for Golovkin and had him ahead 115-112 when their fantastic fight ended. Judge Kevin Morgan scored six rounds apiece for Golovkin and Derevyanchenko, but he gave Golovkin a one-point win due to the controversial knockdown he produced during the first round.

The 37-year-old Golovkin (40-1-1, 35 KOs) and the 33-year-old Derevyanchenko (13-2, 10 KOs) brutalized each other with head and body shots throughout an action-packed battle that’s a definite “Fight of the Year” candidate. Both boxers showed iron chins and ridiculous resilience by withstanding so many flush punches as they went back and forth.

Kazakhstan's Golovkin dropped Derevyanchenko in the first round and opened a cut around Derevyanchenko’s right eye with a flush left hook in the second round. Derevyanchenko withstood those setbacks to produce a tremendous performance against one of the most punishing punchers in recent boxing history.

“I wanna say just thank you so much to my opponent,” said Golovkin, who was booed loudly as he spoke to DAZN’s Chris Mannix following the fight. “[He did] a great job. I respect his team. I told you, he’s a very tough guy. This is [a] huge experience for me. You know, right now I understand I need more.

“After the first round, I feel, ‘This is an easy fight for me.’ No, this is [a] tough fight. … I think it was a bad day for me, a good day for Sergiy, a good day for his team. Guys, this is a huge experience for me. Right now, I’m ready. I know what I need – exactly.”

Golovkin and Derevyanchenko each expressed interest in an immediate rematch. Neither battered boxer attended the post-fight press conference because both went to a local hospital for observation.

CompuBox counted only 13 more punches overall for Golovkin (243-of-720 to 230-of-738). Derevyanchenko landed more punches against Golovkin than any previous opponent, according to CompuBox.

“The cut really changed the fight,” Derevyanchenko said. “I couldn’t see at times and he was targeting that eye. But, you know, no excuses. It is what it is. I was trying my best.” 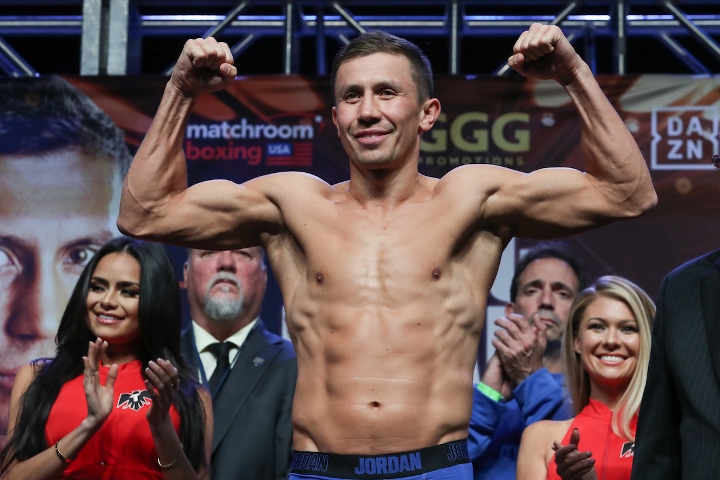 Derevyanchenko lost for just the second time as a professional and slipped to 0-2 in fights for the IBF middleweight title. Daniel Jacobs, Derevyanchenko’s stablemate and frequent sparring partner, edged Derevyanchenko by split decision in their 12-rounder to win the IBF belt 11 months ago in The Theater.

Golovkin began the 12th round aggressively, as if he knew he needed to win to overcome Derevyanchenko on the scorecards. Much like every previous round, Golovkin and Derevyanchenko went at it throughout the final round in a completely fan-friendly fashion.

An understandably fatigued Golovkin also held at times in the 12th round.

Derevyanchenko battered Golovkin with vicious left hooks to the body and hard rights to the head at the start of the 11th round.

Two left hooks by Derevyanchenko early in the 10th round stunned Golovkin and made him move away from his aggressive opponent. Golovkin then nailed Derevyanchenko with rights and lefts that pushed him backward, but Derevyanchenko fired back in an action-packed three minutes to has to be a top candidate for “Round of the Year.”

Golovkin clipped Derevyanchenko with a crushing right uppercut that snapped back Derevyanchenko’s head just three seconds into the ninth round. A resilient Derevyanchenko fended off Golovkin, landed some hard body and head shots of his own and made Golovkin retreat.

A right to the body and two stiff jabs by Golovkin affected Derevyanchenko toward the end of the ninth.

Golovkin landed a hard right hand that moved Derevyanchenko backward in the final minute of the sixth round. Derevyanchenko didn’t let Golovkin follow up by firing a left hook that landed.

Derevyanchenko seemed to hurt Golovkin with a left to the body late in the fifth round. He went after Golovkin, but Dock halted his momentum temporarily by warning Derevyanchenko for hitting Golovkin low.

The left hand that stung Golovkin clearly was a legal punch, though.

After having some success in the third round, Derevyanchenko went after Golovkin again at the start of the fourth round. He landed numerous hard shots to Golovkin’s body and head in the fourth round, but Golovkin withstood Derevyanchenko’s onslaught and landed three lefts of his own just before the bell sounded to end the fourth.

A desperate Derevyanchenko, already bleeding and down an extra point from a first-round knockdown, attacked Golovkin’s body at the start of the third round and got Golovkin to fight moving backward. Golovkin ate all those shots and became the aggressor again.

Golovkin nailed Derevyanchenko with an overhand right that snapped back his head with just under 50 seconds to go in the third round. A determined Derevyanchenko fired right back and prevented Golovkin from following up.

Dervyanchenko overcame a first-round knockdown to start the second round strong. He landed lefts to Golovkin’s body, but Golovkin eventually drilled Derevyanchenko with a flush left hook that opened a deep, disgusting gash around Derevyanchenko’s right eye.

Derevyanchenko complained to Dock that Golovkin hit him behind the head with that borderline blow, but Dock counted it as a knockdown.

Jacobs also floored Dereveyanchenko in the first round of their bout, but Derevyanchenko came back to make that fight very competitive.

“I lost a little bit of focus,” Golovkin said. “After the first round, I think this is an easy fight for me. You know, and Sergiy [was] ready. Respect, you know.”

Eleven-plus rounds later, Golovkin managed to regain the IBF middleweight title that was stripped from him in June 2018. The IBF took that championship from Golovkin because he understandably opted to finalize a lucrative middleweight championship rematch with Alvarez rather than making a mandatory defense versus Derevyanchenko.

Once Golovkin was stripped, Jacobs defeated Derevyanchenko by split decision in a 12-rounder to win the then-vacant IBF title last October 27 in The Theater at Madison Square Garden. Alvarez beat Jacobs by unanimous decision in their 160-pound championship unification match May 4 to win the IBF belt from Jacobs.

Derevyanchenko had hoped to fight Alvarez, but their handlers couldn’t come to an agreement for them to fight later this month in Las Vegas. Once those negotiations broke down, the IBF stripped Alvarez and forced a bout between Derevyanchenko and Golovkin.

Derevyanchenko is the IBF’s No. 1-ranked middleweight. Golovkin is ranked No. 3, but he was the next available contender because the No. 2 spot in the IBF’s 160-pound ratings is unoccupied.

Really enjoyed the fight GGG won 115-112 or 114-113 no issues with the scoring but father time has caught the great warrior and the end is near. Props to Derevyanchenko who put up a brave performance like he did against…

[QUOTE=chirorickyp;20108864]He did get old. His old means competitive but getting beat to the punch and no longer landing the right punch at the right time in the right spot. That was his thing. Now it's gone. Won't look good no…

[QUOTE=MulaKO;20108765]Don’t agree on everything but we’re on similar pages It’s just got old and quick Can’t stanf the fact that GGG is like a fughin puppy chasing his owner And I do believe , we just witnessed GGG getting old…

[QUOTE=chirorickyp;20108699]I don't want to see the 3rd fight because as far as I'm concerned a past his prime GGG beat the prime Canelo Twice. He got screwed in the 2nd fight. Vast majority of boxing pundits and press agreed. When…

[QUOTE=MulaKO;20105634]Yeah , I totally agree that he shouldn’t be fighting Canelo again I believed that GGG won the first fight but was totally outclassed in the second one I really don’t need to see a third fight , I’ve been…