Will Golovkin Give Derevyanchenko Deserved Rematch?

Gennadiy Golovkin agreed to the most sensible solution following his unconvincing victory against Sergiy Derevyanchenko.

Golovkin knows he didn’t defeat Derevyanchenko definitively, just like there wasn’t a clear winner when he and Canelo Alvarez fought the second time a year earlier. That’s why when DAZN’s Chris Mannix asked him about giving Derevyanchenko a rematch, Golovkin acknowledged their war warrants one.

“Absolutely,” Golovkin said. “If [it’s a] big fight for DAZN, for people, of course I’m ready. Guys, I’m a boxer. Just I’m ready for anything.”

We can only hope Golovkin genuinely meant what he said, because Derevyanchenko definitely deserves a rematch. The Ukrainian underdog gave Golovkin what might’ve been the most physically grueling fight he has experienced since turning pro in May 2006.

Both fights against Alvarez, particularly their rematch, were taxing, too. But this brutal battle versus Derevyanchenko delivered essentially everything violence-craving fights fans want, from beginning to end.

When it concluded Saturday night, Derevyanchenko just as easily could’ve been declared the winner of an unforgettable brawl Golovkin narrowly won by unanimous decision. It would’ve been even closer on the scorecards had Harvey Dock disallowed Golovkin’s knockdown in the first round because his right hand that caused that trip to the canvas landed on the back of Derevyanchenko’s head.

The veteran referee recognized that shot as a legal punch, though, and Golovkin won the first round 10-8 on the scorecards of all three judges.

Scoring boxing is such a subjective science, arguments clearly could be made that Golovkin or Derevyanchenko won their fantastic action fight. What’s indisputable is that those 12 rough rounds amounted to a very credible candidate for “Fight of the Year.”

For Derevyanchenko, it was a career-changing performance.

The indefatigable bulldog fought through that controversial knockdown just one minute and 58 seconds into the fight, a gruesome gash around his right eye for 10-plus rounds and Golovkin’s vaunted power. Derevyanchenko even hurt Golovkin badly to the body late in the fifth round, only to have Dock halt his momentum by stepping between them and warning Derevyanchenko for a low blow.

A courageous Golovkin punished Derevyanchenko at times, too, during a back-and-forth slugfest for the ages. Golovkin-Derevyanchenko was so thoroughly entertaining, so worthy of a second showdown, that one could contend there’s no other Golovkin fight that fans would want more than a rematch with Derevyanchenko. 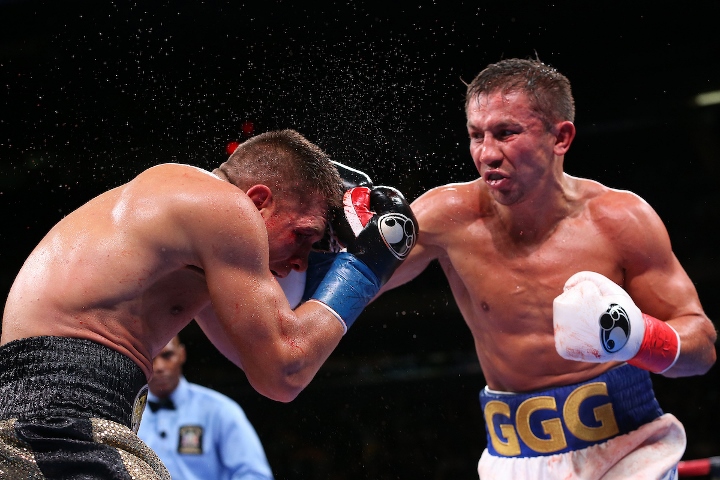 Of course, if Alvarez decides to grant Golovkin a third fight, Golovkin obviously should take that route. Facing Alvarez again would give Golovkin an opportunity to avenge his lone loss – a debatable, 12-round, majority-decision defeat in September 2018 – and pay him more money than he’d make for any other fight.

But if Alvarez keeps declining to give Golovkin another shot, Skipper shouldn’t allow Golovkin to deny Derevyanchenko the rematch he undoubtedly earned. Because then, Golovkin, the undeniable “A” side versus Derevyanchenko, would be permitted to do the same thing to Derevyanchenko that Alvarez is doing to him.

Skipper shouldn’t have created a perplexing setting within which one nine-figure fighter could refuse to face his most attractive opponent, let alone two. Besides, if Alvarez refuses to fight Golovkin and Golovkin won’t give Derevyanchenko a rematch, who would Golovkin fight that’d make it worthwhile to pay him eight-figure purses every time he steps into the ring?

The IBF/IBO middleweight champion definitely doesn’t seem interested in what would be a 160-pound title unification fight against Demetrius Andrade, the WBO champion. Another championship unification match with WBC title-holder Jermall Charlo would be hard to make because Charlo is affiliated with Al Haymon’s Premier Boxing Champions, and fights on Showtime and FOX.

The 37-year-old Golovkin also said last week that he’d only move up to super middleweight for the right fight. Reading between the lines, that didn’t sound like someone who’d sign up to battle British 168-pound standout Callum Smith, whose fights also are streamed by DAZN in the United States.

But his mandatory defense couldn’t be due until more than nine months from now. Derevyanchenko was the IBF’s mandatory challenger until Saturday night, and he’ll remain in its No. 1 spot at middleweight until the New Jersey-based sanctioning organization releases its new ratings in a few weeks.

According to Coppinger’s report, Kamil Szeremeta (21-0, 5 KOs), currently ranked No. 4 by the IBF, will become Golovkin’s mandatory challenger. The undefeated Polish contender knocked out Mexico’s Oscar Cortes (27-5, 14 KOs) in the second round Saturday night on the Golovkin-Derevyanchenko undercard.

Szeremeta’s spot on the card wasn’t coincidental, thus it’s reasonable to think that he’ll fight Golovkin next if he is indeed elevated to the No. 1 spot in the IBF’s rankings.

If Skipper permits Golovkin to fight Szeremeta next, he should do so only if he gets an assurance from Golovkin that he’ll give a deserving Derevyanchenko a rematch in his following fight, assuming Golovkin beats Szeremeta. That’s not too much to ask to allow a scenario in which two of Golovkin’s first three fights for DAZN would have come against unbeaten but unknown, unproven opponents in Steve Rolls and Szeremeta.

Again, if Alvarez changes his mind and wants to fight Golovkin a third time, that’d become DAZN’s top priority over Golovkin-Derevyanchenko II in 2020. From a subscription standpoint, that would be a sensible business move.

What wouldn’t make sense is for DAZN, assuming another Alvarez fight is off the table, to give Golovkin the leeway to avoid a rematch versus Derevyanchenko. Not only does Derevyanchenko deserve it, so do DAZN’s subscribers.

Vanes 2 is around the horizon on 5G

GGG is fighting his mandatory next is what I have heard. He doesn't want to give derev a rematch, has zero interest in charlo and andrade. He is getting paid a lot to fight lesser opponents plus he has equity…

[QUOTE=PunchyPotorff;20119377]Quote: Originally Posted by PunchyPotorff Thus, the typical 'Dervy is too much of a risk, with no reward' comment. If your idol is so great, he HAS to rematch Derevyanchenko. Because Derevyanchenko HAS shown he's a force in the division.…

Quote: Originally Posted by PunchyPotorff Thus, the typical 'Dervy is too much of a risk, with no reward' comment. If your idol is so great, he HAS to rematch Derevyanchenko. Because Derevyanchenko HAS shown he's a force in the division.…

[QUOTE=aboutfkntime;20116115]he will request a easy fight from DAZN following his war with Derevy... knowing that the IBF will order him to fight Szeremeta following that... hoping that the Canelo rematch will happen instead...[/QUOTE] Yes, that seems likely, and the path…