Golovkin Disagrees With Canelo's Stance on 'Title' For Trilogy

Former middleweight champion Gennady Golovkin does not agree with the recent statements of Canelo Alvarez, who said he would have no problem facing the hard puncher for a third time - if Golovkin captures a world title.

Canelo and Golovkin fought to a controversial twelve round split draw in 2017, and then last year Canelo won a close majority decision over GGG to clip away his WBC, WBA, IBO world titles.

On May 4th, Canelo will collide with IBF middleweight champion Daniel Jacobs in a unification, while Golovkin is back on June 8th against Steve Rolls. 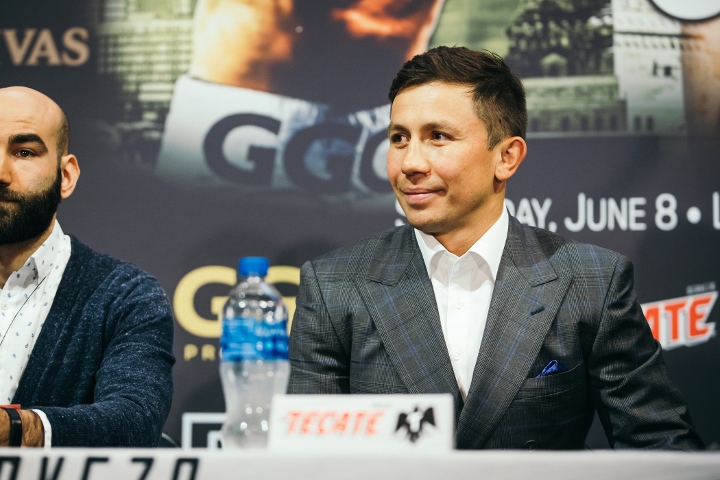 Golovkin believes a trilogy fight should happen regardless, with or without a title around his waist.

“I think Canelo is not correct to say that. We have to see what’s going to happen. I’m hoping to fight him, title or not,” Golovkin said.

And the head of GGG Promotions, Tom Loeffler, agrees with his fighter.

“[A Canelo trilogy is] why Gennady signed with DAZN, it’s the clearest path to that. I don’t think the titles are going to make a difference. Both GGG and Canelo are above needing a title at this point in their career. Canelo fought here in December, he sold out MSG, Gennady has fought here and he built his fight here in MSG. I think the third fight will come down to economics. And location will be a part of the negotiations, because now, he’s not obligated to fight in Vegas,” Loeffler said.

As far as Canelo vs. Jacobs, Golovkin views the contest as being very close to a 50-50 fight. Golovkin won a close decision over Jacobs in 2017.

[QUOTE=aboutfkntime;19692425]if Canelo beats Jacobs... and then selects Andrade for September... Team Bullshlt will have to proceed..... to kick rocks they could have fought Andrade, for the WBO title..... or Charlo, for the WBC mando spot..... both would have guaranteed him…

if Canelo beats Jacobs... and then selects Andrade for September... Team Bullshlt will have to proceed..... to kick rocks they could have fought Andrade, for the WBO title..... or Charlo, for the WBC mando spot..... both would have guaranteed him…

Bro, De La Hoya wanted to have at least one more fight first. Da camps worked out a deal with da WBC under which each would have an interim bout. GGG destroyed Wade while Clenelo fought a true 147lber in…