If ever the term “scoring could go either way” was applicable to a fight, it was Saturday’s thriller between Gennadiy Golovkin and Sergiy Derevyanchenko.

The irony is that while the judges’ final tallies ran in one direction in awarding Golovkin with a unanimous decision, how they each arrived at that point clearly illustrates the subjective art of round-by-round scoring. 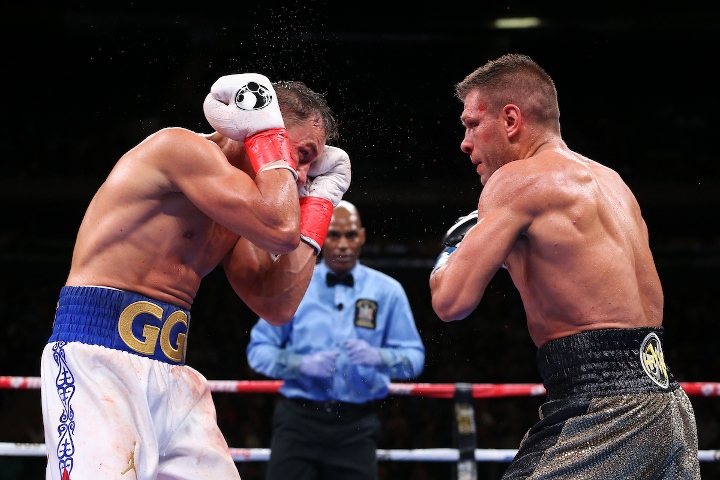 While the final decision was unanimous, the judges’ round-by-round view was anything but that. The three ringside officials were in agreement on just four of the 12 rounds scored, with no two judges seeing more than seven rounds the same way.

All three officials had Golovkin sweeping rounds 1, 7 and 12, while round four was the only frame unanimously scored for Derevyanchenko. Round one was the easiest, as Golovkin was awarded with a knockdown and a 10-8 score on all three cards.

Judge Lombardi was the closest in coming to a consensus with his peers, as he was in agreement on seven rounds apiece with his two ringside peers.

Lombardi and Marlinski—who worked together just three weeks ago in turning in identical 117-110 scorecards for heavyweight hopeful Michael Hunter over Sergey Kuzmin—were on the same page for seven of the 12 rounds scored on Saturday. Both scored rounds 1, 2, 7, 9 and 12 for Golovkin, while both awarding rounds 3, 4 and 5 in favor of Derevyanchenko.

As for Lombardi and Morgan, they both had Golovkin taking rounds 1, 7 and 10, while scoring rounds 5, 6, 7 and 11 in favor of Derevyanchenko.

Marlinski and Morgan were in agreement on just one of the seven swing rounds, and five in total. Rounds 1, 7 and 12 were granted to Golovkin and rounds 5 and 10 to Derevyanchenko in their eyes.

The championship rounds have seemed to stir the most debate and perhaps the difference in the perception between an alleged robbery and simply a close fight that was tough to score.

Most observers had Golovkin taking round 11, a frame that went in favor of Derevyanchenko on two of the three official cards. The fact that all three judges had Golovkin winning round 12 has become a bitter pill to swallow, as Golovkin was badly hurt in the final minute after seeming to be in control to that point. The argument has become that Derevyanchenko’s power surge should have been enough to swing the round, similarly to if a flash knockdown occurs in a round otherwise won by the fallen fighter.

As with any fight, the only scorecards that matter are the ones turned in by the three judges. That said, even attempting to use media scoring in justifying Derevyanchenko as the winner only leads to the same point.

The majority of writers from press row had Ukraine’s Derevyanchenko (13-2, 10KOs)—a 2008 Olympian for his native country before relocating to Brooklyn, New York upon turning pro in 2014—claiming a narrow win. The call from the broadcast team at DAZN—which aired the bout—also had it for the 33-year old.

Yet, pulling three random media scorecards who scored it for Derevyanchenko—ESPN.com’s Dan Rafael (114-113), TheAthletic.com’s boxing insider and breaking news specialist Mike “Sources” Coppinger (114-113) and the live scorecard provided by BoxingScene.com (115-112)—shows the same subjectivity in scoring, as they also agreed on just five of the 12 rounds.

Unlike the judges’ cards, Golovkin managed a clean sweep in just one frame—round one where he scored the bout’s lone knockdown. The three media outlets scored rounds 4, 5, 7 and 10 in favor of Derevyanchenko.

Despite having the same final score, ESPN and The Athletic agreed on just six rounds, including just one of the seven swing rounds—both scoring round two in favor of Golovkin.

BoxingScene had the fight the widest, yet managed to land in agreement on seven rounds each with ESPN and The Athletic.

BoxingScene and ESPN had Derevyanchenko winning rounds 4, 5, 7, 10 and 12, while awarding rounds 1 and 6 to Golovkin.

BoxingScene and The Athletic scored rounds 3, 4, 5, 7 and 9 in favor of Derevyanchenko, and rounds 1 and 11 for Golovkin.

A quick scan of social media reaction—both pulled from live scoring and in the aftermath—reached the same conclusion: a heavily disputed decision doesn’t make it a robbery, just one for great debate.

That is what ultimately took place on Saturday—though more importantly, an incredible 12 rounds of action which remain worthy of long-term discussion, regardless of the scorecards.

[QUOTE=MDPopescu;20107347][IMG]https://photo.boxingscene.com/uploads/golovkin-derevyanchenko-scorecards.jpg[/IMG] the scorecards look like this... :)[/QUOTE] ... one may easily note the lack of consensus in scoring the fight... :)

The judges dont know what they are doing that is quite clear. 11 to Sergei and 12 to ggg hmm it’s like they are just randomly picking things regardless of what happened

[QUOTE=HTown Killer;20106714][B]Well with the switch everyone keeps forgetting GGG is tryin to save up his own $ an buildup his own promotion company but I personally don't see it working.[/B] ... GGG is tryin to be businessman as well as…

[QUOTE=aboutfkntime;20106574]it was a very close fight that could have gone either way just like the [I][B]second[/B][/I] Canelo/Golovkin fight [/QUOTE] Ah, so you have decided to start talking sense.