Golovkin's Coach Has NO Issue With Jacobs Missing IBF Weigh-In

Unlike Golovkin's last 23 fights, this contest went the distance and he saw the end of the twelfth round for the first time in his career. The scores were close, with the judges handing down tallies of 115-112, 115-112 and 114-113. 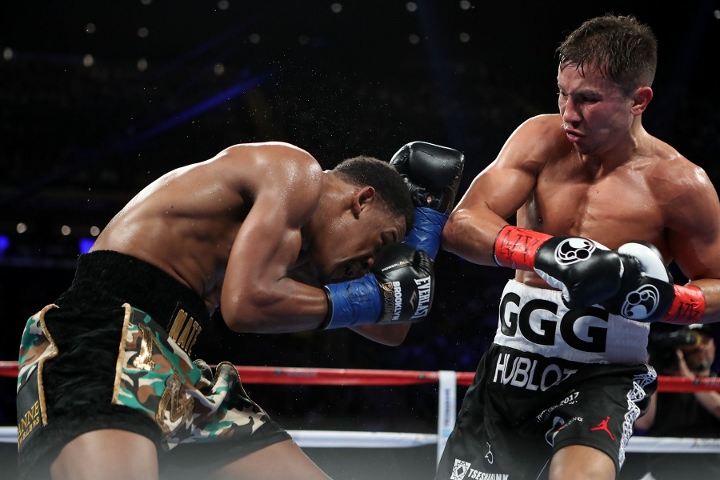 Many fans took issue with Jacobs no-showing the IBF's mandatory second day weigh-in, which takes place on the morning of the fight.

If Jacobs would have participated, he would not have been allowed to weigh more than ten pounds above the division limit. Many speculate that Jacobs blew off that requirement in order to rehydrate his body to be as big as possible.

Blowing off the second day weigh-in made Jacobs ineligible to capture the IBF title, but he was still capable of securing the WBC, IBO, WBA belts.

In the opinion of Sanchez, there was nothing wrong with Jacobs' decision because the Brooklyn boxer was under no obligation to take part in the IBF's weigh-in.

"He did what he thought was best and he came up short. Would he have come up shorter if he had not been that heavy? Who knows. [If the shoe was on the other foot], I would have certainly discussed our options and I would have certainly discussed our objectives. And the situation called for them, in their mind, to do that. So I could only say that we would only do what was best for our interests."

"[Jacobs] made the weight on Friday morning and that's the only thing that he was required to do. If people think that Golovkin didn't look as good [because Jacobs was too big], I could care less. He looked good enough for three judges to win a fight."

[QUOTE=The Akbar One;17552264]Jacobs was less than 10 pounds heavier than Golovkin in the ring. There was a bigger size disparity between Williams and Charlo when they fought.[/QUOTE] yea, I guessed 8lb's..... but whatever it was, the size difference should not…

[QUOTE=aboutfkntime;17552107]there was NO [I]significant[/I] size difference in that fight keyword = significant a 10lb difference is extremely common, and should not have been a problem for a supposed P4P fighter who has mentioned 168 for the last [B]FOUR YEARS[/B] from…

[QUOTE=The Akbar One;17551832]LOL at Golovkin fans claiming Jacobs was 190 in the ring. Jacobs was about 178 in the ring according to people in his own camp.[/QUOTE] there was NO [I]significant[/I] size difference in that fight keyword = significant a…

[QUOTE=The Akbar One;17551832]LOL at Golovkin fans claiming Jacobs was 190 in the ring. [B]Jacobs was about 178 in the ring according to people in his own camp.[/B][/QUOTE] Yeah, that's why he wouldn't step on HBO's scales before getting into the…