Their second fight is scheduled for May 5th at the T-Mobile Arena in Las Vegas.

The first encounter ended in a controversial twelve round split draw last September, at the same Las Vegas venue. 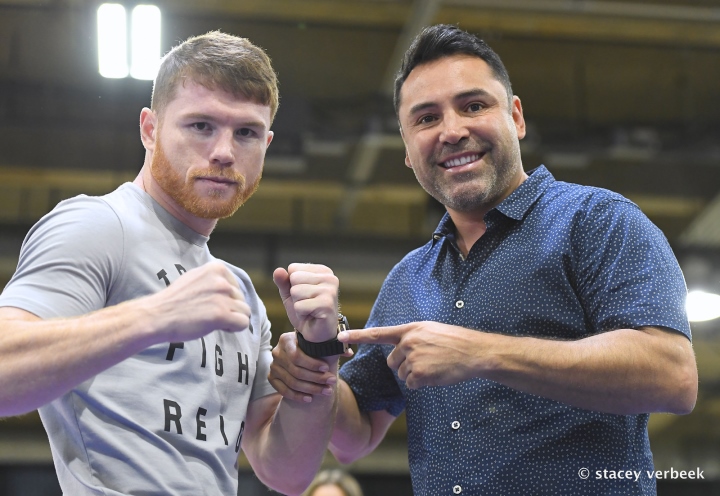 The rematch has come under fire after it was revealed two weeks ago that Canelo tested positive for clenbuterol, which the Mexican superstar attributes to eating contaminated meat.

Golovkin is not buying Canelo's excuse, which several other athletes have used in the country - including other boxers like Erik Morales, Francisco Vargas and Luis Nery.

"Again with Mexican meat? Come on," Golovkin said to media members on Tuesday.

"I told you, it's not Mexican meat. This is Canelo. This is his team. This is his promotion. ... Canelo is cheating. They're using these drugs, and everybody is just trying to pretend it's not happening."

Golovkin did not end things there - he believes Canelo has been using performance enhancing drugs for some time. He also took aim at Canelo's promoter, Oscar De La Hoya of Golden Boy Promotions.

"It was pretty obvious when (Canelo's) muscles were all (enlarged) ... and with the traces of injections, which were visible," Golovkin said. "I can talk about Oscar De La Hoya, too. He is also not clean. He's dirty.

"You should take a look at the photos and ask a doctor. Ask any doctor. Let him explain what those (muscles) are. It's better even to use the lie detector. Then there wouldn't be any silly questions about meat or fruits or chocolate."

The rematch is still expected to go forward, even though the Nevada State Athletic Commission has not officially made a ruling on Canelo's tests.

If the second contest needed any further bad blood, it now has it.

[QUOTE=aboutfkntime;18596697]well, than you are not exactly an unbiased observer with no dog in the fight..... are you? I will keep reading, until I find somebody who is[/QUOTE] You do that...

are you Golovkin fans still performing an in-depth examination of the holes in Canelo's body..... what did your magnifying glass make of this one..... ? [IMG]https://encrypted-tbn0.gstatic.com/images?q=tbn:ANd9GcQvN-RXfkDRaaulh_90VOzb0CVRWlGVU1in3sGu1rj2w9X45doL[/IMG] :lol1:

[QUOTE=TonyGe;18594262]I don't care if you do or don't take me seriously. I don't like Canelo, period.[/QUOTE] well, than you are not exactly an unbiased observer with no dog in the fight..... are you? I will keep reading, until I find…

[QUOTE=aboutfkntime;18594071]only if you are an excuse-making muppet Canelo will have no advantage come fight night should you have really said that, if you hope to be taken seriously? like I said..... good on you for filing your excuse nice and…