Golovkin Blasts Out Rolls With Vicious Knockout in Fourth

The look on Rolls’ face as the disoriented contender tried to get up from Golovkin’s vicious left hook in the fourth round made it obvious Rolls didn’t realize just how devastating Golovkin’s power would feel. The huge underdog from Toronto tried to get up after falling flat on his face, but he fell into the middle ropes and was counted out by referee Steve Willis in the main event of a six-bout card at Madison Square Garden.

Willis stopped their scheduled 12-round, 164-pound bout at 2:09 of the fourth round.

“I love knockouts,” Golovkin said. “I love New York. It was a great night all around.”

The unbeaten but unproven Rolls boxed well at times, particularly in the second round, but he just couldn’t withstand Golovkin’s overwhelming power.

Only one judge, Ron McNair, scored that second round for Rolls. Judges Joseph Pasquale and Robin Taylor gave Golovkin the second round, and they had him ahead 30-27 through three rounds.

The 37-year-old Golovkin (39-1-1, 35 KOs) shed some rust while fighting for the first time in nearly nine months. The 35-year-old Rolls (19-1, 10 KOs) was undefeated entering their bout, but he hadn’t fought anyone nearly as accomplished as Golovkin and hadn’t competed in a fight scheduled for 12 rounds.

There was a lot of discussion throughout fight week regarding Rolls having a legitimate chance to pull off what would’ve been a huge upset because Andy Ruiz Jr. knocked off heavily favored heavyweight champion Anthony Joshua last Saturday night at The Garden.

Ruiz knocked down Joshua, a 25-1 favorite, four times on his way to winning the IBF, IBO, WBA and WBO titles by seventh-round technical knockout. 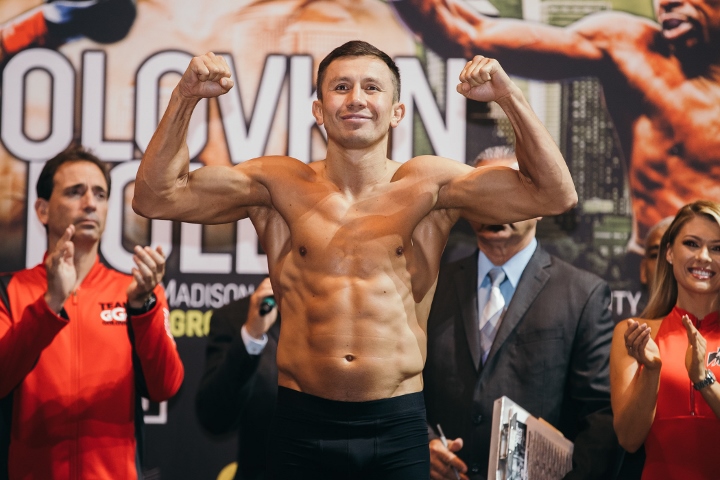 Kazakhstan’s Golovkin, a 50-1 favorite over Rolls, performed accordingly in the former middleweight champion’s first fight since suffering the only loss of his 13-year pro career.

Mexico’s Alvarez is expected to return to the ring September 14 and DAZN executive chairman John Skipper will push for their third encounter to take place next because that deep-pocketed streaming service has both boxers under nine-figure contracts.

Golovkin made many changes following his 12-round, majority-decision defeat to Alvarez on September 15 at T-Mobile Arena in Las Vegas. He signed a three-year, six-fight contract with DAZN, reportedly worth more than $100 million.

Golovkin also replaced longtime trainer Abel Sanchez with Johnathon Banks, a former cruiserweight contender who was groomed to train boxers by late legend Emanuel Steward. Sanchez criticized Golovkin when their surprising split was announced April 24 for being greedy and dishonorable.

Sanchez trained Golovkin for nine years and helped make Golovkin a star in the United States.

With Banks in his corner for the first time, Golovkin got off to a somewhat slow start. He took command during the fourth round, however, and won his first non-title fight in nine years by knockout.

“It’s always good to get a knockout,” Banks said. “I liked what I saw in the ring, but we can do better when we have more time in training camp. But we’re headed in the right direction.”

Rolls tried to wrestle with Golovkin early in the fourth round, but had trouble fending off the strong veteran. A right hand by Golovkin later in the fourth opened up Rolls for the knockout punch.

A flush right hand by Golovkin connected just after the halfway point of the third round, but Rolls shook his head to indicate it didn’t hurt him. Golovkin’s hard left hook to Rolls body slowed him down with just under 40 seconds to go in the third.

The previous round included Rolls’ best moments of the fight.

A straight left by Rolls snapped back Golovkin’s head with just under a minute to go in the second. About 15 seconds later, a right uppercut by Rolls backed up Golovkin.

Rolls was cautious in the first round and tried to keep his distance from Golovkin. With about 20 seconds to go in that opening round, Golovkin landed a hard left to Rolls’ body.

Steve Rolls hopes to fight his way back to second fight with GGG someday [url]https://www.badlefthook.com/2019/6/14/18679486/steve-rolls-interview-post-fight-ggg-golovkin-rematch-someday[/url] “Look out for me, I believe this was just the beginning, [B]real champs bounce back from losses[/B]....'' Perhaps, but [B]40 year old journeymen[/B] don't.

[QUOTE=SUBZER0ED;19830562]Do your own research. I'm not looking it up for you.[/QUOTE] In other words, you can't come up with any names as none of those fighters, after they became world class, EVER fought a fighter as low level as Rolls.

[QUOTE=just the facts;19826339]So who exactly did these guys fight coming off a loss that were as poor of a fighter as Rolls is?[/QUOTE] Do your own research. I'm not looking it up for you.

[QUOTE=SUBZER0ED;19825479]Tyson, Lewis, Holyfield, Pacquiao, Charlo, DSG, to name a few. I understand you hate Golovkin and just want to see him lose as much as possible. It's ok, I feel the same way about Wilder.[/QUOTE] So who exactly did these…

[QUOTE=just the facts;19823342]Again, name one who took a fight this easy.[/QUOTE] Tyson, Lewis, Holyfield, Pacquiao, Charlo, DSG, to name a few. I understand you hate Golovkin and just want to see him lose as much as possible. It's ok, I…